If you’re not moved to tears by the President’s words, then you’re a libtard beyond redemption – like CNN’s Jim Acosta shouting his rude question at the end, which was appropriately ignored.

Of course, the entire libtard chorus went into instant hysteria demanding “gun control” in response to the Parkland horror yesterday – because the defining characteristic of Lefties is not caring about people, but rather caring about having power to control people.

Once again the adage is proven – that “inside every liberal is a fascist screaming to get out” – for the first goal of dictators is a disarmed citizenry so they can’t fight back.  It’s why every libtard hates the Second Amendment.

Let me show you a picture of a mass murderer far greater than Nicolas Cruz:

Taken in 1994, it’s of an Interahamwe militia member of the Hutu tribe in Rwanda, who, together with his fellow butchers, slaughtered between 800,000 to one million men, women, children, and babies with their panga machetes as a carefully planned extermination of the Tutsi tribe.  No guns.  Just machetes.

As ten thousand human beings were butchered by Hutu pangas every day for over three months, mid-April to mid-July 1994 (and some half-million Tutsi women and little girls were raped repeatedly), United Nations Secretary-General Boutros Boutros-Ghali did nothing.  President Bill Clinton did nothing.  French president Francois Mitterrand did everything he could to help the Hutu kill the Tutsis.  The hideous story is told in Gorillas, Savages, and Redemption (March 2011).

Moral insanities like this, of which history is so tragically replete, are not caused by guns, nor weapons in general.  They are caused by a moral collapse of the cultures that perpetrate them.

Thus George Neumayr advises libtards this morning (2/16) to Spare us the ‘Conversation’ about gun-control, when it is they who turned our culture into a nihilistic wasteland allowing mass shootings by some mentally or morally deranged kid. 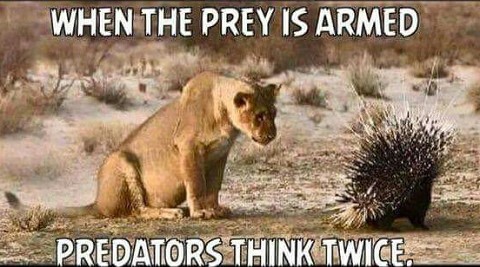 Now we go from serious to ridiculous: 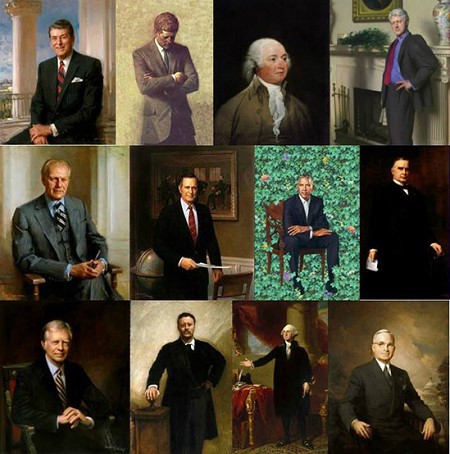 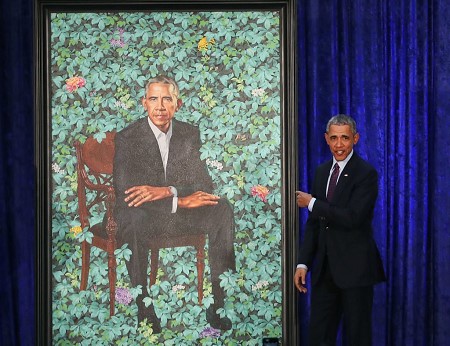 …is the official painting of a President of the United States to be hung in the National Portrait Gallery of the Smithsonian.  It is an on-purpose ludicrous insult to the dignity of the American Presidency and thus of America itself.  It’s laughably bad with his hands drawn so abnormally large you focus on them not the face – not to mention all the stupid flowers.

And yes, it was painted by a pervert who drew an actual human sperm as a vein on Zero’s temple. 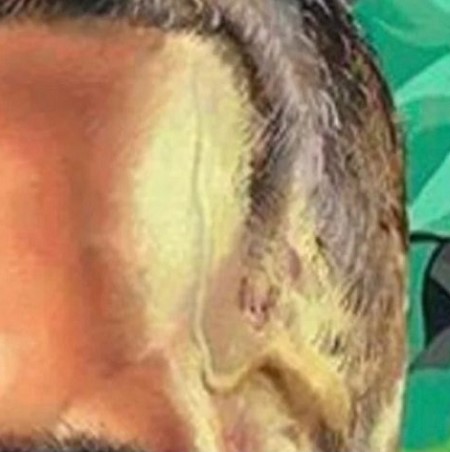 As you can see, in this photo of him at the unveiling, he has no such vein: 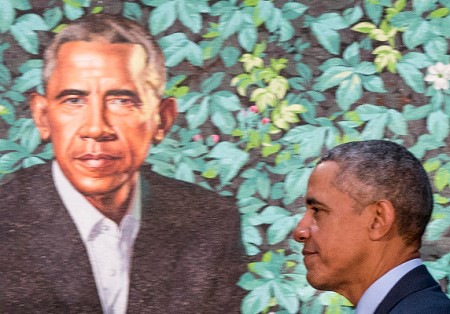 The painter, Kehinde Wiley, has a long history of sneaking sperm into his paintings.  He is a black racist so consumed with a hatred of whites that he loves painting black women beheading white women with a knife.  It’s a “kill whitey thing,” he says.

And this is a guy Zero calls a friend, whom he personally chose to paint his official presidential portrait.  If you ever had the slimmest doubt that Barack Hussein Obama Jr. is a perverted black white-hating racist, this removes it.  Actually, this is the portrait of him we’d like to see, soon to depict his future: 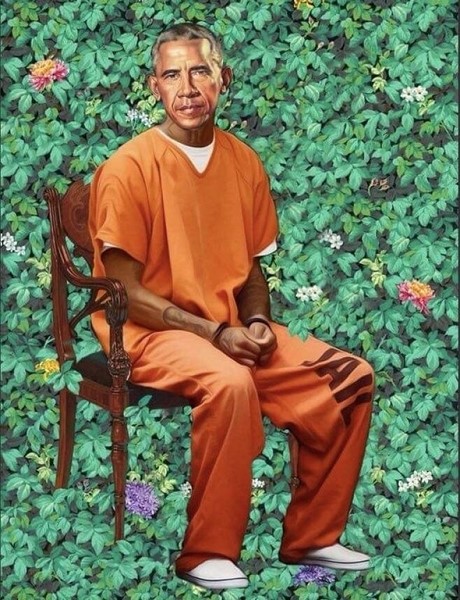 Then there’s Moo-shell’s official portrait that’s so bad it’s being panned by art critics as “a sketch by a sixth-grader that looks nothing like her.”  Gotta love it.  Mrs. Zero didn’t seem too pleased either:

Okay – huge breaking news just arrived this afternoon, that Mueller has indicted 13 Russians for “Interfering with US Elections.”

My immediate reaction was:  So that’s how Mueller gets out of this!  Blame Russkies but not Trump, no collusion, as Deputy AG Rosenstein announced to the press:

But note the dishonesty – as the indictment accuses the Russians of “supporting the presidential campaign of then-candidate Donald J. Trump … and disparaging Hillary Clinton.”  And how was this “supporting” done?  By pushing and promoting ads on the internet by political groups that were pro-Trump and anti-Clinton.

Yet, at least half of these groups and their ads were pro-Hillary – like United Muslims for America and Black Lives Matter!

In fact, the indictment specifically states that the Russians, after Trump’s election, simultaneously organized rallies both for and against President-elect Trump.

Thus the indictment concludes, in direct contradiction of its initial assertion that the Russians were pro-Trump/anti-Clinton, that the express purpose of the Russian operation was to “spread distrust toward the candidates and the political system in general.”

Folks, this just came out and we’ll be learning more in coming days, but Mueller’s strategy at this point seems clear:  The Russians are the bad guys, there was no collusion with Trump, the Russians were not for any candidate but wanted to damage the legitimacy of American democracy.

The Waste Stream Media and Democrat AINOs get off too – thank you Special Counsel Mueller, Sir, for disclosing how we were duped by those dastardly Russkies, so now we can be fully excused for maniacally smearing the President 24/7 ever since he was elected.

It is brilliant.  Just as the walls were closing in on “the greatest scandal in American political history” – the US government directed by the President tried to ruin an opposition presidential candidate and his presidency once elected – it’s over in one fell swoop.  Trump gets to be driven-snow innocent – but only if everyone else who’s not innocent – is the same.

That’s how it looks right now.  Let’s see how this plays out.

Let’s hope not everyone skates.  The odds are, if the above take is right, that after Mueller closes down, there won’t be the stomach for a second Special Counsel to investigate FISA-gate.  Nonetheless, Paul Sperry thinks that CIA weasel John Brennan could be indicted for perjury.

Maybe, but more likely the Deep State will just lie low, messaging let bygones be bygones, promising to leave POTUS alone, and that’s that.  Not a bad outcome – for if they just do that, leave Trump alone, America will be greater again in the blink of an eye.

For example, this week (2/12), Trump proposed demolishing FBI Headquarters in Washington, and move a great many FBI personnel to new regional headquarters in Idaho, Alabama, and West Virginia.  Watch for him to advocate this for almost every big federal agency.

Or, how about what Zero Hedge is lauding as “Trump’s Genius Food Stamp Proposal”  — no more food stamps, but actual food – “Harvest Boxes” – instead.  It is genius.

Then again, Ed Straker at AT asks a pertinent question: “Why Does Replacing Food Stamps with Food Make Liberals So Mad?”

And for proof our El Presidente has cannonball cojones, he gave Putin an astoundingly sobering lesson in Syria, as reported by Bloomberg on Wednesday (2/13): US Air Strikes Kill Over 200 Russian Fighters in Syria.  You do not mess with this man.

On Tuesday (2/12), the Department of Education announced it will no longer pursue “transgender” complaints on bathrooms.  Taking back our culture one step at a time.

“[The DOJ under Obama engaged in] executive branch legal activism. They would take cases or regulations or statutes and expand or redefine the meaning of words in them to advance the agenda that they thought ought to be advanced — an agenda that often had zero chance of passing Congress, where the elected representatives sit.

So you have an agenda, and you can’t get Congress to pass it, so you use unelected regulatory officials and lawyers to draft regulations and enforcement policies that carry out a political agenda that the people don’t favor.”

That is over with President Trump.  A prime example of this activism cited by Sessions is DACA.  Many thought Trump had caved on it – and should now be rethinking.

DACA expires March 5th.  Trump has said he’ll veto any DACA renewal if it doesn’t contain money for the Wall, and an end to chain migration and Visa Lottery.  The Senate Dems will block passage of that and there’s no way they can override his veto.

Trump knew this train wreck was coming.  As DACA expires, it’s Deportation City for “Dreamers.”  And it will be all Congress’ fault for failing to come up with a solution.

At that point – we get to ask libtards a question:  Why do you think your dream of gun control – confiscating countless millions of guns owned by scores of millions of Americans – can be done, when you say deporting a few million illegals is impossible?

Well yeah, of course he did, how could he not, you might say.  Yet it’s another reminder of how providentially lucky we are to have our POTUS-VSG instead of the PIAPS who would have approved.

Before we go, I’d like you to consider a must-read to be John Nolte’s  movie review of 15:17 to Paris: Clint Eastwood’s Ode to the Americanism that Makes Everyday Heroes:

“From the opening attack against bureaucrats and their Ritalin, to watching boys playing in the woods with their toy guns, to the opportunities to become your own man in our military, to the selflessness of the Christian faith, to their proud masculinity, Eastwood is saying one thing above all — that if you will just let American boys be American boys, there is a very good chance they will grow up to be extraordinary men.”

Which is exactly what the Left doesn’t want because they hate masculinity, hate America, and hate themselves.

I think Trump won’t consider he has made America truly great again until he persuades the Left (at least all but the irretrievable) to give up all their self-destructive hate and anger, and learn to love themselves and their fellow Americans as they should.

That’s wrap to an extraordinary week.  An Expedition Notice – while Islands of Mystery and Legend is sold out, we have room for one more couple to The Hidden Holy Land.  This is your time to experience the Holy Land once in your life, and in the way you’ve dreamed of.  Don’t have regrets, don’t make excuses why not.  Life is short.  Carpe Diem!

We close with funny nostalgia.  There was a time when people with real talent could bring tears of laughter to your eyes with no endless stream foul-mouthed vulgarity – something of which no comedian today is capable.