What’s the purpose of Congress conducting a travesty second impeachment that everyone knows will fail?  Penn & Teller would recognize it right away – misdirection.

But misdirection from what?  One answer would be the very first Bill dropped in the 117th Congress, HR 1, a 791-page grotesquerie named “For the People Act,” which it is anything but.

The link is to the full text, but the most accurate summation of it is by Gatestone’s J. Christian Adams on Monday (2/08).  It’s a compendium of every crooked shenanigan the Dems could dream to permanently lock in to federal law everything they did to steal the presidency from POTUS last year.

It’s an unbelievable nightmare of a bill to match Orwell’s description of the totalitarian future: “A boot stomping on the face of mankind… forever.”  Adams’ is a must-read, but you may need some nausea pills beforehand.

It’s also revelatory about the Deep State, particularly the Justice Department where he worked, and “where,” he describes, “career staff ignored federal laws they didn’t like, and only enforced the ones they thought would help advance their political beliefs.”  That’s the way the DOJ operates not just now, but has for decades.

Still – why is this such a clown show?  With these clowns in the forefront? 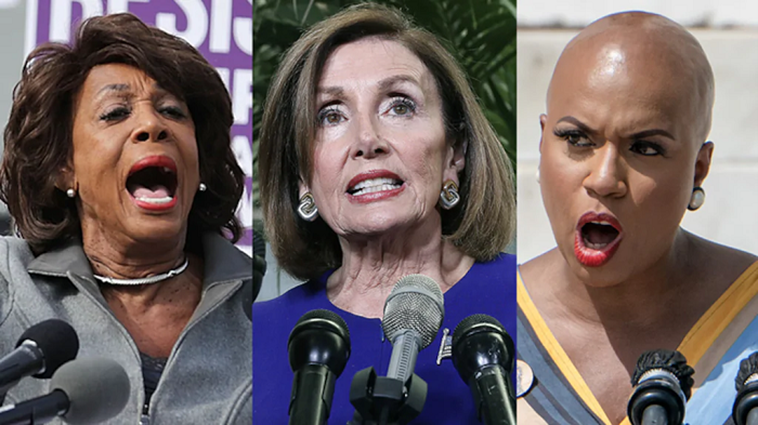 They’re all part of the Dem Circus Act of Intimidation.  Their lunatic threats and accusations, megaphoned by the Commie Media, easily cause yellow-belly Rinos to cave to their demands, like Turtle, or to vote with them – like the Dirtbag Six in the Senate.

But the Purpose of the Circus is not to intimidate Congressional Cowards but all of us.  You’ve seen the meme of POTUS saying: 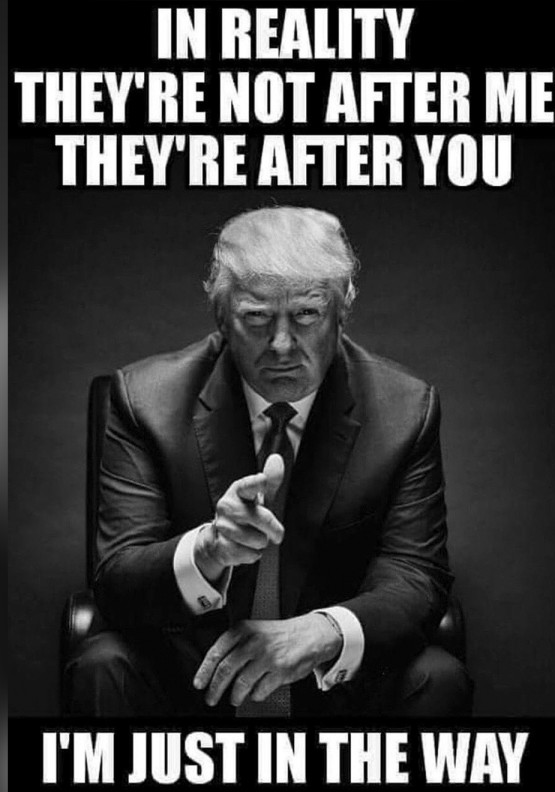 You’ve likely seen it many times – but you should let it sink in like never before, as it’s happening right now, this week before our eyes.  Thousands of armed soldiers have turned Capitol Hill into a barbed wire encampment under siege.  From whom? You, and millions like you deemed now “Domestic Terrorists” for being patriotic and supporting the legitimate President.

Suddenly, after the Antifa-led “Capitol Hill Insurrection” on Jan 6, Dems are howling for a “Domestic Terrorism Law” targeting not BLM or Antifa that burn down cities, but “white supremacists” and other pro-Trump ilk.

Zero’s CIA Director and architect for the Russia Hoax attempted coup against POTUS, John Brennan, described who the new “domestic terrorists” are:

The best the Dems have – which is why all other Dems hate her – is Tulsi Gabbard of Hawaii.  She sums up what’s going on:

We are being demonized for the express purpose of being able to criminalize any protest, any attempt to redress our grievances – as guaranteed by the First Amendment – no matter how peaceful, against an oppressive FPX Dictatorship.  Or indeed, any peaceful rally for the real President, Donald Trump.

Here’s how demonic it became this week.  Yesterday (2/11), CNN compares Trump supporters to the perpetrators of the Rwandan Genocide with 800,000 people hacked to death with machetes.

An evil is descending upon our country the like of which it has never suffered.  The awful truth is that we are headed straight for a Soviet America.

Now here’s a question.  The Dem Impeachment Circus will be over quickly.  Word on the Hill is that the vote to convict will be held no later than Sunday (1/14), with the not-guilty verdict foregone.  It takes a two-thirds vote to convict, 67 Senators (if all 100 are present) – meaning 17 Rinos would have to.  No way hyper-remotely that’ll happen.

One reason is that it is utterly 100% unconstitutional.  Another is how POTUS’ lawyer obliterated the Dems’ claim of violent incitement:

Thus the question: the Dem Fascists will need another Circus of Misdirection.  What will it be?  For an answer, we must turn to the collective brain power of TTP – which is considerable.  That is:  what do you think will be the next Dem Circus?

The time-honored way for dictators is a war, of course.  Not with China, which has bought FPX many times over, nor with Russia for Putin has done the same.  Not Iran, for that would help Israel too much.

But maybe something else.  Hard to get a “Climate Change Crisis” going when most of the country is freezing.  Even Florida is freezing. It’s even colder in much of Europe – 20 below zero in Germany with all its solar power grids iced over, so no heat for you, says Merkel.

A constantly mutating China Virus requiring never-ending lockdowns?  California’s Gruesome Newsom is about to be recalled for that.  The finances of every lockdown state are collapsing with no business sales taxes to pay for expected services like water, electricity, firemen, on and on.

But the Dems have got to find something to distract the public, for this will stop working hours from now: 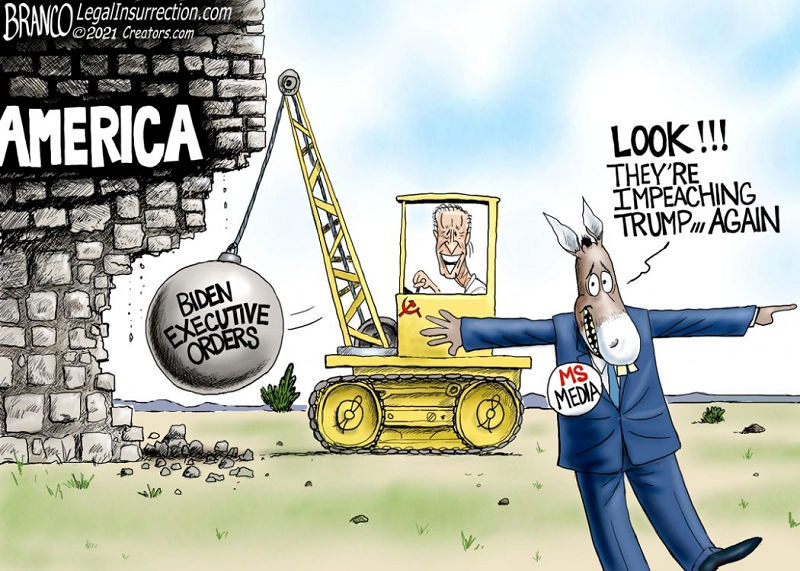 So give us your ideas on the Forum!  Enquiring TTPer minds want to know!

Meanwhile, let’s focus on reality, not distraction, depicted by FPX’s bulldozer taking a wrecking ball to every part and aspect of our country.  Realize we are now ruled dictatorially by people who hate us personally – they really want us to starve and die – and hate the very existence of America, it’s founding principles, its history, its culture, its economy.

They want to control, rule, and destroy – not liberate, empower, and build.  And that is their weakness, their critical vulnerability.  They want us to live in fear, impoverishment, and subservience.

That’s why they are so desperate to import third world illegal aliens who have always lived that way – so their numbers will overwhelm born Americans who haven’t and will rebel against the attempt to make them.

So we have to figure out the smartest and most effective ways to successfully rebel before they can do this.

We could play Marxists and Fascists against each other for example.  There are exploitable differences.  Take this quote from Mussolini:

Isn’t this precisely what we have in America now – ruled by a gigantic Deep State and gigantic monopolies (Twitter, Facebook, Google, Amazon, US Chamber of Commerce) in a collusion of Wokeness, a conspiracy to crush small business, and a compulsion for cheap illegal labor?

Our allies against this Fascist Corporatism are Latino, Black, and poor White American citizens who are being screwed royally by this – along with the “petit bourgeoisie” of small business employers, all whom traditional Marxists claim to champion.

Is this dichotomy emerging in your community – and if so, how could you exploit it to freedom’s advantage?  This is an example of what we talked about last week – FTD.

Again, I’d like to elicit your thoughts on what other ways FTD could be implemented.  In fact, I’m thinking of asking Miko to set up a FTD section of the Forum for ideas and discussion.  What do you think?

To get you started, here’s a full list of FPX’s 52 executive orders and actions issued so far as Dictator of America – to give you ideas on how to FTD with them.

Now, parallel to that, we need a “FTR” strategy, where the “R” stands for RINOs.  On Wednesday (2/10), the Daily Mail had a helpful story in this regard:  More than 120 former Republican officials hold Zoom meeting to discuss forming breakaway anti-Trump third party.

Well, how cool is that?  What a great idea, thank you, goodbye and good riddance.  With them gone, how much easier will it be for POTUS to take over the GOP?

Why in the world would you leave a fully functioning party you have 70% of already, and all the douche-wimps you don’t want are leaving themselves?  Of course you wouldn’t.  The GOP is going to be El Donaldo’s to rock and roll in ’22.

Oh… with a Trump GOP House and Senate majority as of January 2023, the best bet in the US will FPX’s impeachment.

Okay – on that cheery note we close.  Let me express my deep appreciation to all of you who took the time to take our 2021 To The Point Survey.  Your answers, responses, and comments are really helping to make TTP better than ever in this crisis year.

So if you haven’t already, please take a moment to take our 2021 To The Point Survey.  You can click on the link and take it right now – won’t take you long, 3 to 5 minutes!  Thanks…

Lastly – Happy Valentine’s Day this Sunday!  It’s a wonderful way to celebrate and express your appreciation for that special person in your life whose smile lights up your heart with sunshine.  Living in gratitude is the happiest way to live.