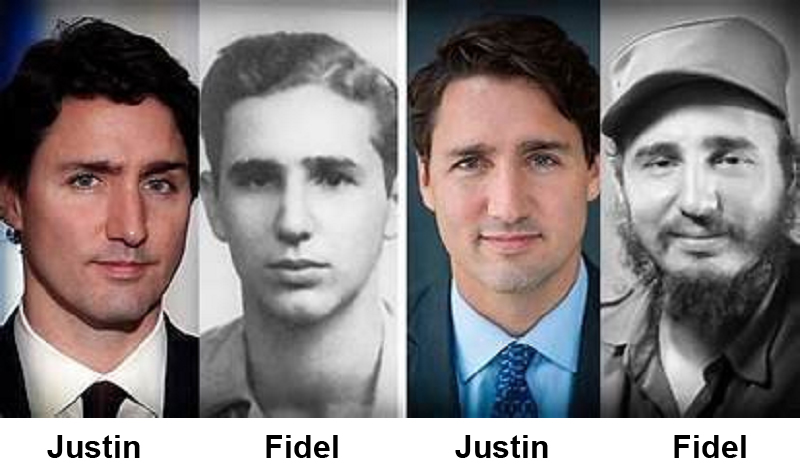 Like father, like son.  There’s a reason why millions of Canadians think their current prime minister is not the son of their previous one, Pierre Trudeau, and call him “Justin Castro” instead.

Because his mother and Pierre’s wife, Margaret Trudeau, was notoriously promiscuous, idolized Castro, was on an “undisclosed island” in the Caribbean (see link) in April, 1971, and Justin was born 8½ months later on December 25.  Here the Trudeaus are with Fidel in Havana on a later visit.  She sure is friendly with him, isn’t she? 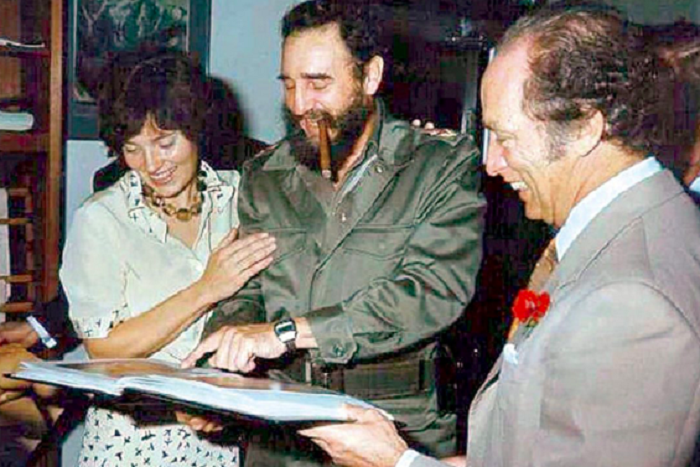 The Justin Castro mantra is popular in Canada right now because not only does he look like the Communist Cuban but is behaving like him.  On January 31st, he went into hiding refusing to meet with the Freedom Convoy truckers, then late the following night issued this deranged tweet: Not only was this a vicious smear of utter lies regarding the trucker patriots, it was an utter lie that parliament did anything of the kind – there was no vote at all that day (Feb 01), much less a unanimous one.

On the contrary, upon coming out of hiding and appearing in Parliament this week, he has had to endure blistering attacks: Justin Trudeau Under Fire: Faces Second Day of Insults, Heckles in Canadian Parliament.  One MP yelled amidst the catcalls, “Let him speak – he has nothing to say!”

Meanwhile, millions of Canadians read the Daily Mail, and saw this headline on Tuesday (2/08): Freedom Convoy Truckers Say Trudeau And North America’s Liberal Media Are Falsely Demonizing Them As Ultra-Right-Wing Crazies. And After Spending A Week In Their Midst, The Mail’s Reporter Can Only Conclude These Peaceful, Good-Natured Protestors Are 100% Correct About That – If Nothing Else.

While this afternoon (2/11), on Fox: ‘We’re Not Backing Down’: Canadian Truckers Share Message To Trudeau.  “We’re not caving, we’re not moving until the vax mandates are gone,” is their message.

In a parliamentary system, a majority vote of the Members can remove a Prime Minister from office.  Sure looks like that’s soon to be Justin Castro’s political fate.

Wish it were that easy in America?  It isn’t, but “the walls are closing in” on Comrade Xiden. One way is via Section 4 of the 25th Amendment, where the VP and a Cabinet majority can declare him mentally unable to fulfill his duties of office.  This is why, on Wednesday (2/09): Dozens Of Republicans Again Call For Joe Biden To Take Cognitive Test.

One simple and quick way to do this is for him to take the Mini-Mental State Exam (MMSE) commonly administered in doctors’ offices across the country – on live television in the Oval Office.

That’s possible only when his puppeteers decide he’s reached his sell-by date. As he’s disposable, when that will be is up to them.  A key question for them now is, will dumping Joe before the mid-terms in November increase or decrease the odds of a Dem wipeout?

Hard to see how he’ll be allowed to hold on after the wipeout, so their question will be how to minimize the damage.  Would a President Kamala have enough of a honeymoon to boost Dems at the polls?  A lot of calculations for them to consider – especially if there’s a Black Swan or two, say, a Manchin and/or Sinema party-switch giving the R’s a Senate majority.

In fact, the R’s already do at the moment.  Dem Sen. Ben Ray Lujan (NM) has had a stroke requiring brain surgery, so until he returns in a couple of months, the Senate is 50R-49D.  Pretty ideal time for Manchin-Sinema to save their country from the Dem insanity that personally hates them, wouldn’t you say?

By the way, Lujan is the Senate’s most fanatical advocate of vaxxes and boosters, insisting children get jabbed as well.  He’s only 49.  Did his mRNA jab cause the blood clot that traveled up his spine and lodged in his cerebellum?  The doctors with the RAIR Foundation think it clearly possible.

Here is RAIR’s analysis: Senator (49) Targeting ‘Dangerous and Deadly’ Vaccine ‘Misinformation’ Suffers Stroke.  At the very least, let’s hope Lujan heeds the warning of this physician to all parents, “If you give that jab to your children, you are committing a crime”: 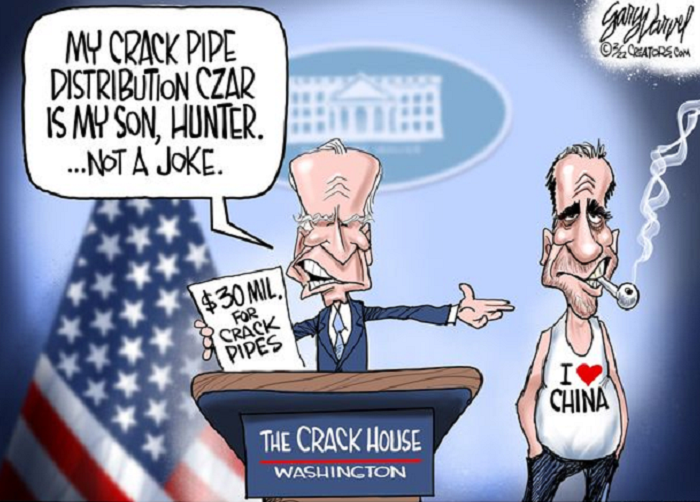 Okay, not the latest. Today (2/11): Biden Puts An LGBT Activist, Gender-Fluid Drag Queen ‘Pup’ Fetishist In Charge Of The Nuclear Waste That Could Be Used For Terror Bombs.

He’s a pervert named Sam Brinton who is Xiden’s new Deputy Assistant Secretary of Spent Fuel and Waste Disposition in the Energy Department’s Office of Nuclear Energy.  This is total treasonous madness.  The link above is a must-read. 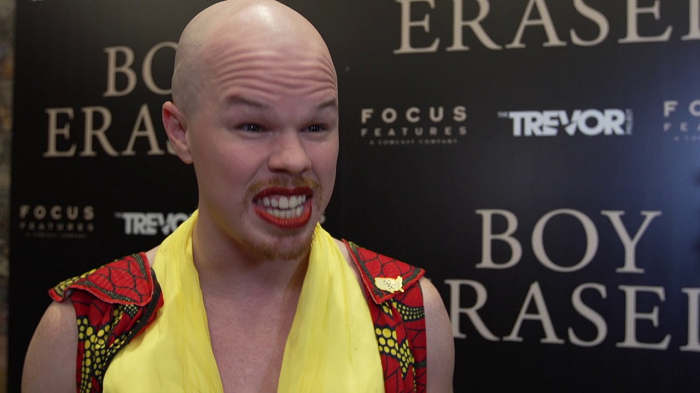 But wait, there’s more! To me, this is even crazier treason – and it’s personal.  In June 2016, I wrote Idyllic Isolation, about the wonderful people on a small atoll in the Pacific called Kanton, using the pictures I took being with them.

I encourage you to at least take a quick look at it before this story – again today (2/11) — hits you: China Setting Up an Air Base Close to Hawaii.  Yes, on Kanton, using the runway of the now-abandoned Canton Island Airport.  More than a mile long (6,230 feet), it’s still usable, we landed our chartered King Air on it no problem.  My photo: Kanton belongs to the island nation of Kiribati (kee-ree-bass), which was a US ally but which Xiden allowed the Chicoms to buy off so they can be a military threat.  Treason has become Joe’s middle name.

After all, his principal puppeteer is Chief Chicom Xi Jinping.  Why cut his strings when he can be blackmailed in perpetuity, and when they don’t have that with Kamala?  That’s why they’ll keep him squatting in the White House as long as possible.

All of this is too woke-wacko to be the distraction the Squatter needs, and Ukraine is running out of steam being one, even with his warning yesterday that “Things Could Go Crazy” there.  Really?  Why should Putin invade Ukraine when he’s making billions with Brent oil (price in Europe) today at $95?

Odds are that after these massive “war games” his military is having in Belarus on Ukraine’s border are over – which Putin gets to hold for free as the Euroweenies are paying for them (and big war games are really expensive) – all the soldiers will go back to Russia and that’ll be that.  And Pooty pockets tens of billions.

So what’s the next biggie distraction from which voters need to be distracted – Bidenflation?   Hard to answer with headlines like this (2/10): Rent The Highest In 20 Years, Electricity The Most Expensive Since 2005 And Furniture Prices Higher Than EVER: The Staggering Costs Hitting Americans’ Pockets Under Biden As Inflation Soars To The Highest Point In 40 Years

“Ever since the early 1980s, the CPI (Consumer Price Index) has been progressively reconfigured with various gimmicks designed to understate real inflation of out-of-pocket/cost-of-living expenses in order to reduce cost-of-living increases in Social Security payments, federal worker paychecks and the like.”

And that the best place to see how this works is at economist John Williams’ ShadowStats.com.  Here’s his latest report:

“INFLATION (Feb 10): Year-to-year inflation continued to surge in the both the January 2022 headline Consumer Price Index (CPI-U) and the ShadowStats-Alternate CPI, with both measures hitting new multi-decade highs.

However calculated, the real bottom line is intolerable price increases for everything families need to live – electricity, food, gasoline, on and on – there’s no way to ignore it and guess who gets the blame with crosshairs on his forehead.

Further, everything Xiden and his people are doing is designed to make it worse – to ruin oil and natural gas production, decrease food production, hamper supply chains, destroy worker wages by flooding the country with illegal aliens, et al.

Ask yourself – or any woketard you unfortunately may know – try to think of anything this menace to America is doing to make our country better instead of disastrously worse? You can’t because there isn’t. 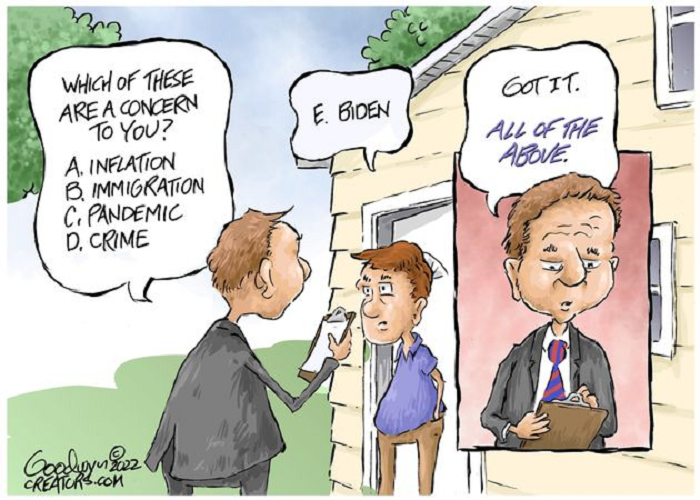 The real worry, then, is what in a hysterical frenzy of panicked desperation will the Dems do to keep their power this coming November?  The Dems don’t know yet so neither do I.  All we can do is:

There’s something else you might consider.  Here’s a discussion on commodity futures as the best inflation hedge: Inflation and the Coming Commodity Super-Cycle.

Here’s the Darwin Award of the Week: Man Out On Bond Accidentally Shoots Himself In The Head While Trying To Rob Someone

And let’s hope this portends the end of the NEA and thus CRT: More Than Half Of Teachers Looking To Quit Due To Pandemic Burnout

Here’s wisdom from the Sage of the TTP Forum, Mike Ryan:

“Now the tables have turned with Omicron. The vaxxed are having more severe illnesses than the unvaxxed.

Should we deny ICU beds to the vaxxed now? After all, they decided to go for the spike protein technology instead of the virus protein capsule vax technology or to rely on therapeutics or nothing at all.

Or should we admit that the ICU and the Emergency Department, too, have always been filled with the consequences of life choices? Obesity, addiction, poor nutrition, COPD, driving while intoxicated, falling off ladders are root causes for so much healthcare.

Republicans have pursued tort reform for years. Well, boy and howdy, absolving the drug companies of all liability is tort reform beyond anyone’s imagination. Be careful what you ask for.”

We close with the observation that our country is suffering all the abominations iterated above for one single reason: that the Democrats were allowed to steal the Presidency of the United States on November 3, 2020 and again on January 6, 2021`.