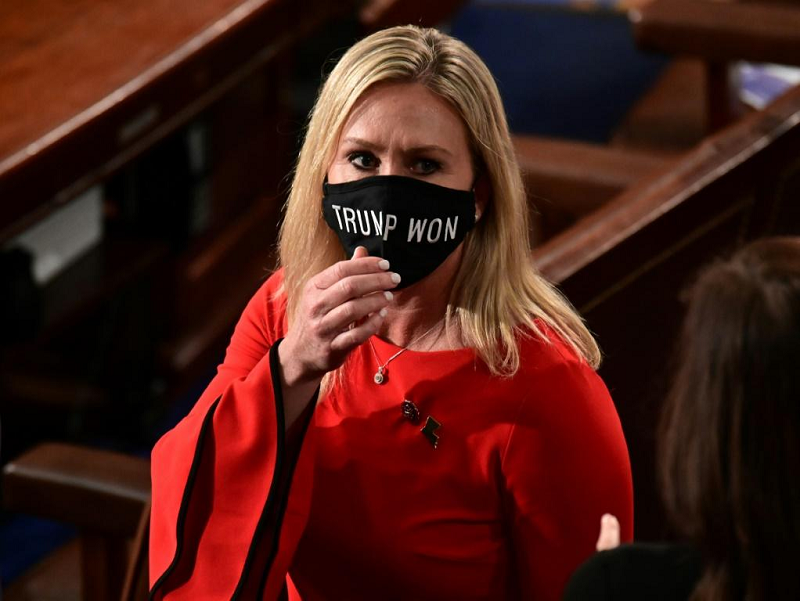 No doubt who is the HFR Hero of the Week, is there?  Here she is, glowering at Pelosi in the House Chamber.  The Dems have their lightning rod, AOC.  Now we have ours, MTG – Marjorie Taylor-Greene, every patriot’s heroine.

We’ll be talking about MTG further, but first, I need to thank all of you who took the time to take our 2021 To The Point Survey.

Your answers and comments are really being helpful in enabling us to make TTP better than ever – especially now as our country becomes an American Dictatorship in broad daylight.  TTP is needed as never before, and it’s my job to make sure it is.  So please help me by taking our 2021 To The Point Survey if you haven’t already – just click on the link and answer/comment away.  Thanks!

You all know what happened last night (2/04): House Strips Marjorie Taylor Greene of Her Committee Assignments.  The link is to Breitbart, which has great quotes from her, and her GOP colleagues condemning her demonization by Pelosicrats.

Now check out her tweet this morning about last night’s vote:

This gal is way cool – and way smarter than AOC.  Or Ilhan – check out this slice & dice:

MTG is just what we need – a 100% Pro-America, Pro-Life, Pro-Gun, Pro-Trump lady with smarts, sass, and guts who rattles Dem Fascisti right out of their cages.

So, how about an Action Item you can do right now to support her?

Note that only one of them – Fred Upton-MI – is one of the GOP 11 morons who voted against her last night.  All 22 of the rest voted with her (including Liz Cheney).  What you can do is call or email their offices to request a GOP Steering Committee be convened to reassign Congresswoman Greene to her committees.

The Dems and Rinos can do nothing to prevent this if 12 or more committee members vote her back in her committees.  Have fun along with MTG!

We need to have more fun like this – a lot more.  So part of the HFR from now on is to play a game called FTD until we win.

Most of you know that I played a substantive role in what the press called The Reagan Doctrine – RR’s strategy to get rid of the Soviet Union and win the Cold War – and that we never gave that name to what we were doing.  Our name for it was FTC.

So the game now is to do to the Democrats what we did to the Commies: FTD.  Of course you know what the “F” stands for, and that’s what we’re going to learn how to do just this to the Dems’ party, allies, sponsors, and media propagandists.

The overall strategy to accomplish FTD is the same one that made FTC successful: identify the enemy’s most critical weaknesses and vulnerabilities, then figure out how to max them out until the enemy disintegrates.

Such identification will be an on-going task as it’s a long list.  Here are two to begin with.

The foundational justification for many of FPX’s Fascist EOs – like canceling the Keystone Pipeline – is man-made CO2 “climate change.” So it must be a primary foundational attack of ours to discredit it like Marxism, Fake Science and all Fake News about it.

You can start in your own community, form a discussion/activist group on “Climate Common Sense.”  Everyone should read geology professor Gregory Wrightstone’s Inconvenient Facts: The Science Al Gore Doesn’t Want You to Know – and keep up on the latest with him on Twitter: https://twitter.com/GWrightstone.

This will enable you and your group to refute what your kids or grandkids are being taught in school, what claptrap your local media is pushing. or what politicians claim in a local townhall.

Man-made global warming/climate change is a political agenda, not science. It is pretend science, like Marxism pretended to be “scientific socialism.”  It is the current political agenda of the Left to be the replacement of Marxism as a rationale for government control over every aspect of everyone’s life.

That’s all it is and nothing more.  Go on the offensive, put the climate change fascisti on the defensive.  Start this local in enough places and you have a nascent national movement.

Ps: one place to start if you’re unfortunate enough to live in New York City – whose Commie Mayor wants to ban natural gas heating new buildings.  This is a big leftie movement in cities now across the country.  Good time to laugh at it, as: Meteorologists Warn ‘Deep Freeze’ For The US Begins Next Week.

Another critical Dem vulnerability to exploit is: The Democrat Party is a collection of competing constituencies.

Take women vs the LGBTQWTF crowd.  On Day One of his dictatorship: [FPX] Executive Order Unlevels the Playing Field for Girls.  That is, Trannies get to ruin all sports for women.

That is, only those individuals with XX chromosomes (i.e, the ladies, genetically) get to compete with each other – no one with XY (i.e., the guys, genetically) allowed.  Same vice versa.  Problem solved.   Same with bathrooms by the way.

And if FPX’s Richard Levine – who pretends he’s a woman named Rachel – his Ass’t Secretary of Health has a hissy fit, well, get a real life, Dick. 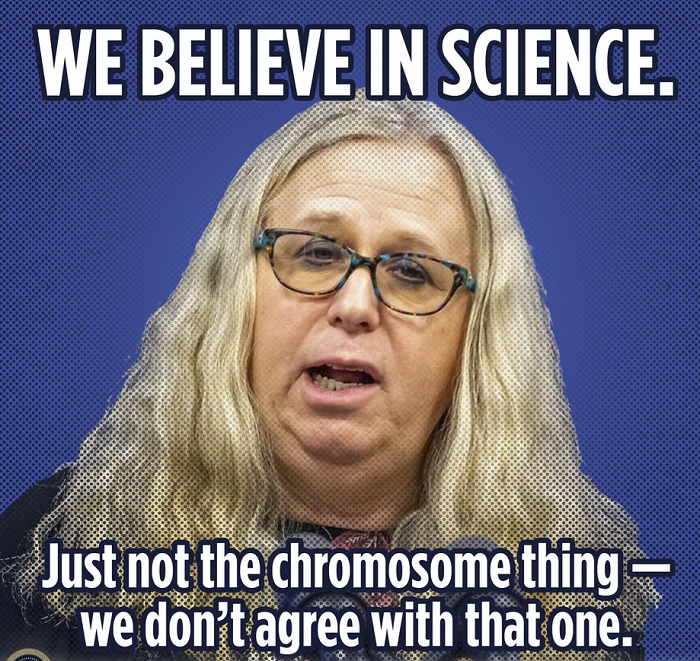 Okay, one more fun thing.  Read a short sci-fi novel written in 1957, Eric Frank Russell’s Wasp.  It’s the story of how one lone guy brings down a whole dictatorship.  One of his ways is with cheap sticker labels (a lot cheaper now to print).

You could use them plastered all over any civic surface protesting how FPX’s allowing a flood of illegals is stealing jobs from Black and Latino American citizens. Seeing them stuck around a neighborhood as a physical presence is a limbic emotional hit more than something online.

The Main Street vs Wall Street is another example of Dem competing constituencies.  So – I’m going to ask TTPers to think of ways to identify which constituencies are competing and why, then ways to get fights going between them. How’s that for a cool assignment?

It’s not only Dems though – it’s the Uniparty. On Monday (2/01), for example, we were greeted with this good news: Dozens of Former Bush Officials Leave Republican Party, Calling It ‘Trump Cult’.  Well, halleluiah and goodbye!   A “Trump Cult” is exactly what we want the GOP to be.

But that means they won’t be at the homes of RINOs in their home districts.  Turtle, for example, should be experiencing a loud but peaceful and legal 24/7 protest whenever he’s back home in Kentucky demanding his resignation – for praising Liz Cheney for her “courage” in voting to impeach POTUS, and for his disgusting smear of MTG as a “cancer” on the GOP.

Life should be made intolerable for RINOs like Turtle.  Think of ways to do that, and who else would best be to target. Lindsay Graham for instance.

On Tuesday (2/02), Gateway Pundit ran a story that, as it says, may raise your eyebrows to the roof.  It’s about a pharmacist who’s expert at forged doctor signatures on prescriptions.  He’s made a study of FPX’s supposed signatures on his EOs, and shows you the evidence of how FPX Executive Order signatures may be forged.

Decide for yourself.  But if they are, wouldn’t every one – here’s a list – be invalid?

The full bore insanity of the second (!) impeachment of POTUS for “inciting” the Capitol Hill “riot” in a speech he clearly asked attendees to be peaceful, in a Red Queen Trial (“sentence first, verdict after”)…

is not Disney funny, but is morally depraved, demonstrated by this montage of murderous Leftie Dem Fascist threats to him:

Which is why someone with the morals and moxie of MGT is needed as a GOP leader right now – against the corrupt Uniparty and for American freedom instead.  So we’re going to close with her speech and press conference this morning (2/05) after what happened to her last night.

Please watch it entire – it is breathtaking.  And after you do – please take our 2021 To The Point Survey.  It will really help us.