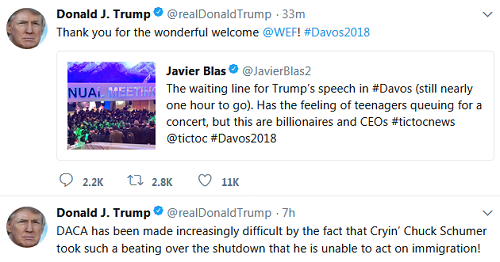 The HFR is called such because we’re optimists – the glass is half-full, not half-empty.  It was not easy to do this during our long eight-year Nightmare of Zero.  It’s been enjoyably easy for the past year of MAGA.

There are still weeks, however, that are not as easy as others.  This week is one of them.  Yet we’ll manage to be more than full by the end.

Yesterday (1/25), I wrote Mad Dog on the Porch – how SecDef Mattis appears to be wimping out in Iran, Iraq, Turkey, and Syria.

Today, (1/26), we ran two opposing views on this with regard to Turkey:  David Goldman’s Tinpot Turkish Dictator Humiliates the United States, and Caroline Glick’s The US Quietly Sidelines a Turkey in Decline.

I have tremendous regard for both David and Caroline.  I want to Caroline to be right – and thus me to be wrong about Mattis, and by extension his boss – but I’m afraid David may be right.

We’ll find out soon, for as the war between the Syrian Kurds and the invading Turkish Army is waging as I’m writing this, Caroline says the Kurds will win, while David’s bet is on the Turks.

Caroline cites AEI’s Michael Rubin who argues that The Kurds Could Beat Turkey in Syria, based on the incredible weaknesses of the Turkish military – and in truth, Michael’s is a real eye-opener and a must-read.  But he’s not citing facts on the ground.

And those are, the Kurds in Afrin are begging Syria’s Russian-backed dictator Assad to save them – when Erdogan has Putin’s approval for the invasion.  This, while Erdogan threatens to expand his invasion into all northern Syria.  In other words, as of today, the Kurds are losing, Erdogan is winning, and Trump is being humiliated by a tinpot Islamofascist Turkish Nazi.

Hold out hope that Trump will finally lose his temper as Erdogan continues to publicly insult him over his weakness, and unleash Mattis.  The quicker the better, for Kurds are being slaughtered as you are reading this.  Erdogan is becoming a Turkish Hitler before our eyes. 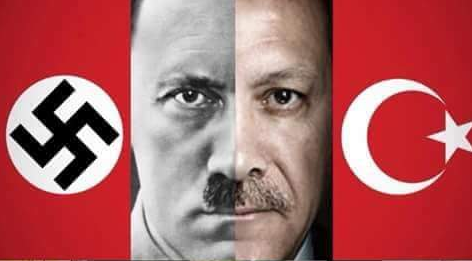 There’s another half-full/empty conundrum this week.  Breitbart readers’ hair is on fire over Trump, on Wednesday (1/24), Promising Amnesty and Citizenship to 1.8 million DACA Illegal Aliens.

Yet the Moonbat reaction is just as mad, as the Washington Examiner reports: Left Seethes at Trump’s ‘Hateful,’ ‘White Supremacist’ Immigration Plan.

Well, this is an easier call.  The POTUS completely snookered the Dems with their Schumer Shutdown.  As you know, the Dems completely caved on Monday (1/22).  POTUS is in the catbird seat.  What he’s offering now is as good a deal as the illegal alien-loving/American citizen-hating Dems are going to get.  If they have any functioning brain cells left, they should grab the offer before it’s gone with the wind.

That’s because Trump’s game plan is to drive the Left so far out of its mind that it will iss-pay off normal Americans so much they’ll demand every illegal including “Dreamers” be deported immediamente.  Just look at that “Left Seethes” link above; how “Dreamers” are protesting in rage at the home of “Sellout Chuck”;  and by doubling down – with “illegal alien activists” now demanding immediate amnesty/citizenship for all 30 million illegals in the US.

DACA is “no longer enough” for the outraged Left, you see.  Combine that with Illegal Immigration Including MS-13 Criminals Exploding, 1 Million on Deport List as reported on Tuesday (1/23) – and it won’t be long until there’s a deafening demand to get rid of all of them.

This is no accident, Comrades.  As predicted in a fascinating series of tweets by an American Indian named Jay Fivekiller, DACA is not a bargaining chip of Trump’s, it’s bait.

And sure enough – Shutdown Schumer swallowed the hook, line, and sinker today.  He’ll now be cut out of all Immigration Reform talks as is Lindsay Graham.  In a nutshell, here’s what everyone now understands the Dem strategy to be: 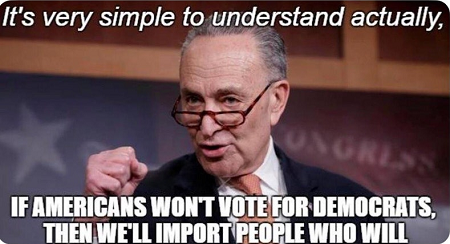 Which brings us to Davos.  To quote Jay Fivekiller: 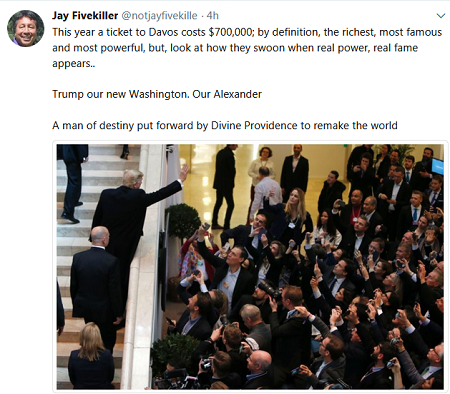 Trump at Davos is a seminal moment.  The world’s elite treated him as a rock star.  His speech was monumental – made more so by his understated almost monotone delivery.  No bombast – so powerful it wasn’t necessary.  Read the Full Text – and watch the video:

This is a full-fledged American President speaking for us, working for us, committed to truly making America great again in every way.  The complete antithesis of his execrable predecessor.

Further, he is an utterly unique President – completely at home and speaking for all of us Deplorables, yet at the same time completely at home with the world’s business elite for they are his peers, he’s one of them.  On top of that, he has the guts and genius to be brutally honest with them, and doesn’t give a rat’s patootie what they think of him.

He’s America’s President with total pride and total no apologies – if they don’t like it, that’s their problem.  Their reaction – the world’s elite reaction?  He’s their rock star.  Check out the headline:  European CEOs Go One By One To Tell Trump They Are Investing Billions Back In The US.

OK – time for Watergate on Steroids! 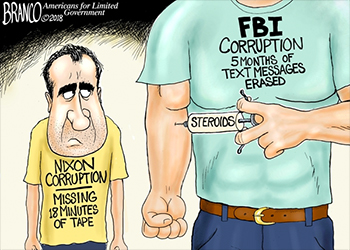 These are the Kicker Leads at top of the Drudge Home Page on Wednesday (1/24):

No wonder Investors Business Daily that day ran an editorial: The FBI Is Looking Guilty As Hell in Russia Probe.

But much worse is:  FBI Agents Threatened Physical Harm to President Trump.

In the first Drudge kicker above, the New York Post maintains “All roads lead to Comey” in this massive scandal.  BUT!  Follow all the bread crumbs strewn along that yellow brick road beyond Comey and the FBI to the ultimate culprit in organizing the coup against an elected President by the FBI under Comey, the CIA under Brennan, the DNI under Clapper, and the DOJ under Lynch:  Zero himself.

As Rep. Paul Gosar (R-AZ) explained on Tuesday (1/23), Obama’s weaponizing the executive branch against Trump’s election is part of his same pattern regarding Fast & Furious, Benghazi, the IRS and so many other scandals ignored by the media.

And as Andy McCarthy explained, Comey had to find Hillary not guilty of any crime, because if he did, he necessarily would have had to find Zero guilty as well in blatant collusion with her.

Thus it is Obama who ultimately needs to be indicted as the mastermind of it all.  Watch how this unfolds.  Once everyone sees Zero’s guilt and his reputation is permanently destroyed, Trump pardons him in magnanimity, hailed as a hero saving Zero from prison.

Time for a trio of Hahahahahs of the week.

Every Marvel comic book awarded by GLAAD (Gay & Lesbian Alliance Against Discrimination) has been axed.  That’s every comic book depicting LGBTQXYZ, Feminist, Black Lives Matter, and other assorted Leftie characters as heroes has been cancelled.  Win the culture, win the politics…

Black Racists Enraged by Malia Obama’s White Boyfriend.  Can’t make this up, too funny for words…

While you’re at it at AT – where you read the “black racists” story – take a look at Ayn Rand’s Prescience.  As many of you know, I’m a huge Rand admirer for her moral defense of capitalism, of businessmen (real ones, not crony) as moral heroes.  I can only imagine how ecstatic she would be over President Trump.

Two prime example of why she would this week.  First is how Trump featured, of all the world leaders he met at Davos, his meeting with Rwanda’s Paul Kagame: 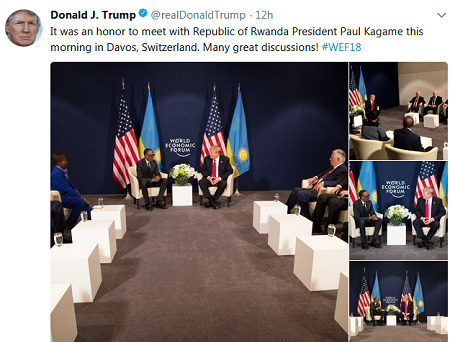 Paul Kagame is one of the most extraordinary Christian heroes of modern times.  As I wrote in my history of the Rwanda Genocide in Gorillas, Savages, and Redemption (May 2011), Paul Kagame deserves the Nobel Peace Prize more than anyone on earth today.

Yet he is hated by the Left (and the French who are ultimately responsible for the genocide) as he is a real Christian and genuinely pro-American.  It’s marvelous to see Trump – who knows all of this – lionizing him.

Prior to this week, the Pubs remained permanently traumatized by Dems blaming them for the Shutdown of 1996, always on the defense ever since, always caving to any threat by Obama to shutdown the government if they didn’t comply with his every demand.

The Dems didn’t know what hit them, they thought the Pubs would do a Shutdown El Foldo just like always.  Big mistake.  They couldn’t believe they were up against a president who’s both a genius and more ruthless than they are.

For those “obstructionist loser” tweets and labeling the “Schumer Shutdown” was just the warmup.  Trump went straight for their jugular with a Pure Evil 30 second video – stating that “Democrats who stand in our way of immigration reform will be complicit in every murder committed by illegal immigrants.”

At the end, comes Trump’s voice:  “I’m Donald Trump and I approved this message.”  And note:  It’s a campaign ad “Paid for by Donald J. Trump for President, Inc.”