The GOP prez race came into sharp clear focus this week with Trump overtly morphing into an American Juan Perón.

100 years ago, Argentina was in a race with America to be the most successful economy in the world. Its GDP per capita was higher than Germany’s, France’s, or Italy’s. That was long ago, for thanks to a succession of demagogic populists, stretching back to Juan Perón (1895-1974), the country is a wreck.

That’s The Parable of Argentina, The Economist’s warning to any country tempted to embark on its version of Peronism – that it risks becoming “the Argentina of the 21st century.”

This is precisely what America risks with Donald Perón. On Tuesday (1/19) in Iowa, he abandoned the slightest pretense of being anything other than a crony capitalist wedded-to-the-establishment populist vote-panderer.

As Daniel Horowitz explains, Ethanol is the anchor baby of our crony capitalist economic system. Both the anchor baby strategy and the ethanol mandate are “designed to legitimize an illegitimate entitlement to other people’s sovereignty and money, absent their consent.”

The ethanol mandate is the ultimate “venture socialist, government/corporate racket embedded in our economy that relies upon coercing individuals to purchase a terrible product… foisted upon the American people by the establishment in both parties.” Iowa Gov. Terry Braindead (what many Iowans call him) – the textbook definition of the GOP establishment – on Tuesday begged Iowans not to vote for Cruz specifically because he opposes the ethanol mandate.

That is the very essence of what Juan Perón did to Argentina. In The Persistence of Peronism, The Economist describes Peronism as a set of emotions rather than ideas. There is no ideology, only “power as an end in itself,” achieved by welfare subsidies for the proletariat and corporate welfare for the elites.

Perón was an egomaniacal narcissist devoted to power and public adoration, who could not tolerate being criticized and would destroy anyone who did so. As Perón declared in 1951: “The masses don’t think, the masses feel and they have more or less intuitive and organized reactions. Who produces those reactions? Their leader.”

Today in America, that is a precise description of those who worship Trump. Sadly, that includes those who were once our conservative heroes. In endorsing Trump this week, Sarah Palin betrayed every single conservative principle she once championed. Most horrific of all is her embracing someone who advocated partial-birth abortion, and may still as whatever he says is a pander not a conviction.

Name the bedrock principle of conservatives, from limited Constitutional government to genuine free market economic freedom to pro life pro-marriage traditional values, on and on – and on every one Trump has either been on the other side or is indifferent to them.

For Sarah – Sarah! – to stand next to this man, to have the audacity to claim he’ll end “slurping off the gravy train” of Washington as he then proceeds to ladle out the ethanol gravy, is beyond contemptible. She is Sarah Sellout.

Trumpkins claim to be a revolt against the Washington Elite and most specifically the GOP Elite. The command center of the GOPE is the RNC, Republican National Committee apparatus that runs the party.

Yet within hours of National Review coming out with its Against Trump edition this morning (1/22), the RNC removes National Review from its hosting of the candidate debate in Houston this coming Monday (1/25).

How more in bed with Trump can the hated GOP Establishment be? On Wednesday (1/20), the GOPE’s textbook prez candidate Bob Dole came out for Trump and against Cruz – because he certainly is an expert on “cataclysmic” losses. Yesterday (1/21), Rush observed, The Establishment Shifts to Trump.”

What more could it possible take for Trumpkins to wake up from their hypnotic trance, to realize they have been suckered by a charismatic demagogue like Juan Perón, a mentally imbalanced narcissist like Obama, who only wants fame-power-adoration without principles or mercy?

His election would be the death of conservatism in America and of any chance to regain our freedom or Constitution. Because conservatives will have abandoned every single conservative principle they claim to possess in selling their souls to him.

Not only that, look at how his fans are becoming just as viciously vile as he is, nasty little storm troopers out to destroy anyone who fails to genuflect.

As such, his election would be vastly worse than Hillary’s, Bernie’s, or SloJoe’s. With a Dem, conservatives can reunite in opposition, paving the way for Cruz or another real conservative in 2020.

With Donald Perón, there will be no conservative opposition or any other opposition – for we will live in an Argentine America with mobs whipped up in fury against anyone who dares criticize him.

Thank heavens there are still principled conservative leaders – like my friends of so many years Richard Viguerie, Morton Blackwell, and Brent Bozell – who have retained their moral convictions and capacity to think clearly.

With ironic timing, on Tuesday (1/19) as Trump was being an Ethanol Whore in Iowa, the New York Times ran a story entitled America’s Best Days May Be Behind It. With Donald Perón in the White House, there’s no doubt they will be.

On Wednesday, the AT ran The End of Saudi Arabia? It’s worth a read, particularly in concert with TTP’s The Soviet Saudi Union, written 12 years ago (January 2004).

In the Let’s Hope So Dept: Europe’s Welcome to Migrants Wearing Thin. So thin that German swimming pools ban migrants. And right on cue, the libtard media calls any “backlash” to the Moslem moocher invasion of Germany “Neo-Nazi.” Here’s to the backlash!

Plus a lot of weird stuff regarding Putin. First, today (1/22), Putin Accuses Lenin of Ruining Soviet Union. Yes, you read that right. Second, Litveniko Killed for Calling Putin a Pedophile. You can’t make that up either.

It personally saddens me as I had such a nice time there two years ago. There are plenty of pictures in The Square Mogadishu Peg, the Round Somalia Hole (March 2013). If you scroll down to the last pic, you’ll see me in front of the Lido: 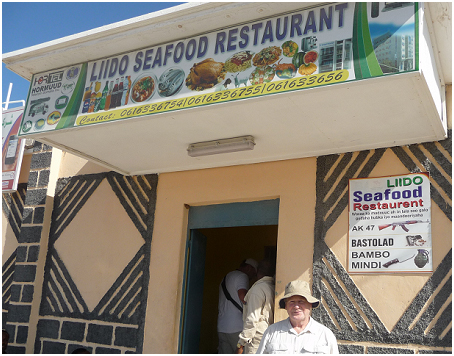 It never ceases to amaze how Moslem terrorists commit their worst atrocities on their fellow Moslems.

The HFR Hero of the Week? That would be British actress Charlotte Rampling. She’s a current Oscar nominee for Best Actress (in 45 Years). Today she had the courage to tell truth to power and expose the condemnation of the “all-white Oscars” for exactly what it is:

“It’s anti-white racism.” At last, someone actually says it. Good for you, Charlotte. Thanks.

Time to go before “the snowstorm of the millennium caused by global warming” buries DC. Let me close with something thoughtfully upbeat.

On Monday (1/18) as you know, Glenn Frey died at a too-young 67. I confess to an incurable fondness for The Eagles.  Who can ever forget Hotel California, or Your Lyin’ Eyes, or Take It Easy (Standin’ on a corner in Winslow, Arizona, and it’s such a fine sight to see;  it’s a girl, my Lord, in flat-bed Ford, slowin’ down to take a look at me…)?

When The Eagles broke up in 1980, their founder Glenn Frey went solo.  His most successful album was The Allnighter, released in 1984.

I did a lot of speaking on college campuses around the country in those days, on The Coming Collapse of the Soviet Union.  I’d intro my speech by having a track from The Allnighter played through the auditorium’s sound system — really loud.  The kids’ cages would always be rattled – for here was badass rock n’ roll played by one of rock music’s icons, and it couldn’t be more anti-Soviet and pro-American.

I thought I’d play it for you now – because as Frey joyously compared America to the “cold and gray” Soviet Union, it is my hope that we can celebrate it being Better in the USA this November instead of dreading the nightmare of an Argentine America run by Donald Perón.

So here is Glen Frey’s It’s Better in the USA. The lyrics follow, so you can sing along.  If you can’t rock out to this, you haven’t got a pulse. Turn your speakers or your headphones up to the max and enjoy.

Well, they look to the east
They look to the west
The Third World wonders
Which way’s the best
We got freedom, we got soul
We got blue jeans and rock’n’roll

I hear the same propaganda day after day
It’s gettin’ so hip to knock the U.S.A.
If we’re so awful and we’re so bad
You oughta check the night life in Leningrad

It’s better, baby
Nice sweater, baby
What do you say you and me go for a little drive?
Come on