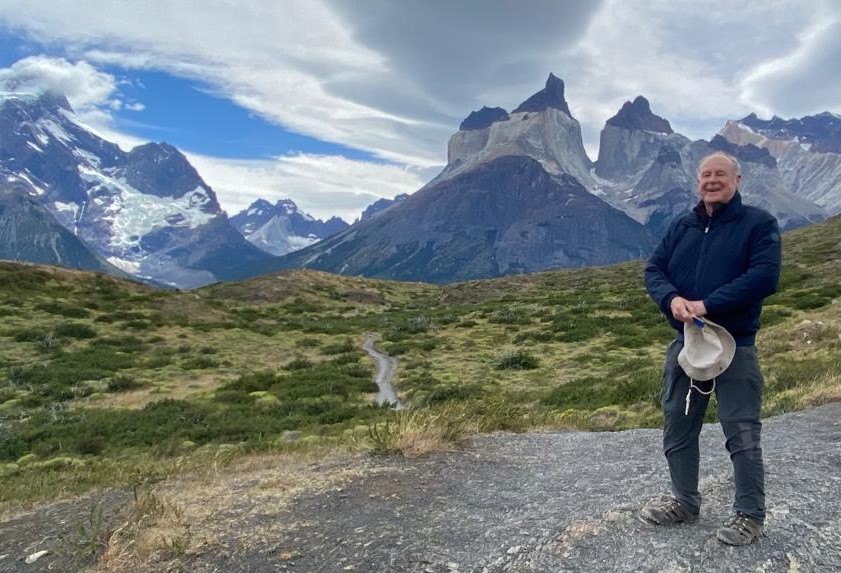 Just got back home from the wilds of Patagonia since early January – such as being at the breathtaking Torres del Paine above – and can’t thank Mike Ryan enough for his spectacular HFR last week (1/13).

Thanks to Mike, TTPers were the first clued in to what others are figuring out this week.  This from Branco (1/17): And now it looks like China Joe’s very own legal bodyguard Merrick Garland is in on the game: DOJ Permitted Biden’s Personal Attorneys to Search for Classified Documents Without FBI.  May not be long now when we hear leftie protestors in Lafayette Square across from the White House updating the 60s Vietnam War chant about LBJ:  “Hey, hey, ho ho, China Joe has got to go!” 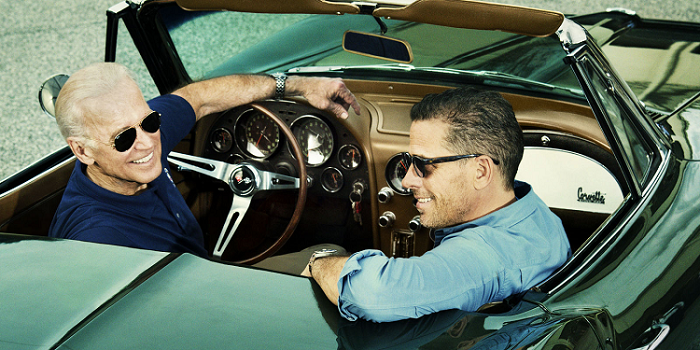 Let’s also hope that at long, long last, the most degenerate and corrupt presidential offspring ever will get what he deserves:

Hunter Biden Lived in Wilmington House with Classified Documents While Bagging Millions Linked to the Highest Levels of Chinese Intelligence.

And his father, the most degenerate and corrupt president ever (ok, along with LBJ).  The address of that home is 1209 Barley Mill Rd, Wilmington, DE 19807. 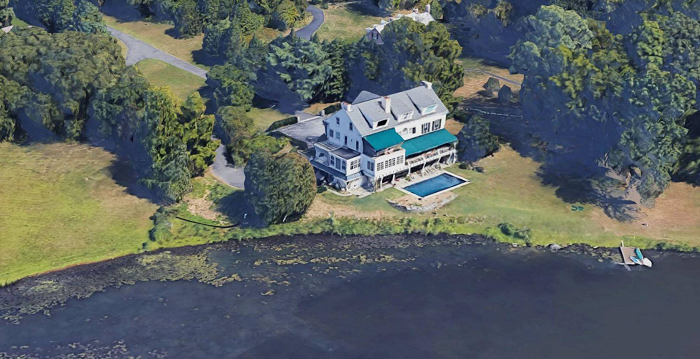 According to realtor.com, it has a minimum assessed value of just under $1M: $999,000.   Zillow, on the other hand, assesses it at $1,368,000, for which it would rent at an estimated $7,612 per month. That’s a little more than half of one percent, as home rental rates are normally between that and one percent of assessed value per month.

In other words, a normal monthly rental for a million-dollar home would be between $5,000 to $10,000.  Yet the “background screening test” that Hunter filled out for renting “office space” in his father’s home – discovered in Hunter’s laptop, shows he paid $49,910 a month from March 2017 to February 2018.  But not to Joe. To a cutout instead, an office building in DC called “The House of Sweden”: Hunter Biden’s $49,910 Rent Exactly Matches Deposit on Office Shared with Chinese Energy Company.

Are we having fun yet?  A suggestion for Speaker McCarthy: how about amending that bill you just got passed rescinding funding for China Joe’s 87,000 more IRS Agents down to 86,000, keeping 1,000 new agents for the exclusive purpose of forensically auditing the tax returns of the Biden Family: Joe, Jill, Hunter, and brothers James and Frank?

All the Dems who want Joe out of the White House they enabled him to steal could support that.  There are others who would shriek in protest. From yesterday (1/19): Democrat Kingmaker Clyburn ‘All-In’ For Biden 2024, Issues Warning Against Primary Challengers.

Looks like there may be a Dem civil war brewing on Capitol Hill between pro and anti Joe factions – and you know what Bonaparte said about not interfering when your enemy is destroying itself.

Fact is, Joe has reached his sell-by date because inflation is going to be unbearably impoverishing for so many millions of voters by 2024 – for which they will be bitterly blamed unless they find a scapegoat and that’s Joe.

As you may know, late last year Facebook-Meta laid off 13% of its workforce (over 13,000 employees) after an operating income loss of 46%. More layoffs this year.

Thursday (1/19): Amazon Coldly Began Its Layoff Of 18,000 Workers By Informing Them By EMAIL And Cutting Off Their Access To Work Computers: ‘Unfortunately, Your Role Has Been Eliminated’.

Fed Chair Jerome Powell would really not like to do that – but realizes that’s the only way to stop ruinously high inflation.  Then again, there’s going after what’s causing the inflation to begin with: trillions of dollars in federal government deficit spending.

Which is why he’s rooting for Speaker McCarthy in the coming debt ceiling crisis.

As Liz Peek explains in The Hill today (1/20), Big Spender Biden To Blame For Inflation And Coming Debt Ceiling Brawl. The multi-trillion “Inflation Expansion Reduction Act” and last month’s Omnibus are prime examples. Yesterday (1/19), Yellen at Treasury announced the federalies’ debt limit of $31.4 Trillion had been reached – so it has to be raised.

Part of McCarthy’s deal with the Freedom Caucus was that any agreement to raise the debt ceiling must be paired to concomitant reductions in government spending.  FJB says he wants a ceiling raise with no cuts, no strings.  Powell is rooting for McCarthy.

It’s a glorious opportunity for the House to assert its constitutional mandate to control spending.  Should be fun to watch what fed programs the Freedom Caucus wants to cut or even eliminate.  If it were up to me, I’d zero out the Education Department and EPA for starters.

Dan Crenshaw (R-TX) sums it up: We’ll Have Cuts Tied to Debt Ceiling Raise and if There’s a Default, That’s Biden’s Choice.

Texas Attorney General Ken Paxton is doing his part – and in a very interesting way.

In 1996, Speaker Newt Gingrich persuaded Bill Clinton not to veto and sign into law his Personal Responsibility and Work Opportunity Act. Among its provisions was to make it illegal for the federal government to provide most all forms of welfare payments or public services to illegal aliens – so that:

“Aliens within the Nation’s border not depend on public resources to meet their needs and the availability of public benefits not constitute an incentive for immigration to the United States.”

Naturally, FJB and Mayorkas have illegally suspended enforcement of this law. In response: Reducing federal spending and illegal immigration at the same time: Thanks for the Two-Fer, Ken!

One part of federal spending will not be cut but increased – resulting in rending of garments and gnashing of teeth by those lovers of mass murderers in the Kremlin such as Breitbart, ZeroHedge, Conservative Treehouse, and Tucker Carlson.  House Armed Services Chair Mike Rogers and House Foreign Affairs Chair Mike McCaul will see to that.

Ereyesterday (1/18), Rogers and McCaul jointly issued this statement “urging the administration and our allies to transfer to Ukraine urgently critical weapon systems they need to defeat Russia”:

“The current handwringing and hesitation by the Biden administration and some of our European allies in providing critical weapon systems to Ukraine stinks of the weak policies of 2021, such as not sanctioning Nord Stream 2 or providing U.S.-origin Stingers before the full-scale invasion. While those policies failed to deter this conflict, the current indecision and self-deterrence will prolong it – costing Ukrainian lives. Now is the time for the Biden and Scholz governments to follow the lead of our U.K. and Eastern European allies – Leopard 2 tanks, ATACMS, and other long-range precision munitions should be approved without delay.”

Today (1/20) at the Ramstein Air Base in Germany, Defense Ministers from throughout Europe, together with SecDef Austin, to commit to increased military aid to Ukraine.  The Twitter account of the Ukraine Ministry of Defense lists the astounding amount of weaponry and aid now pouring into Ukraine from Finland, Sweden, Holland and more than a dozen other NATO countries – along with $2.5 billion more from the US.

This is just a sample: 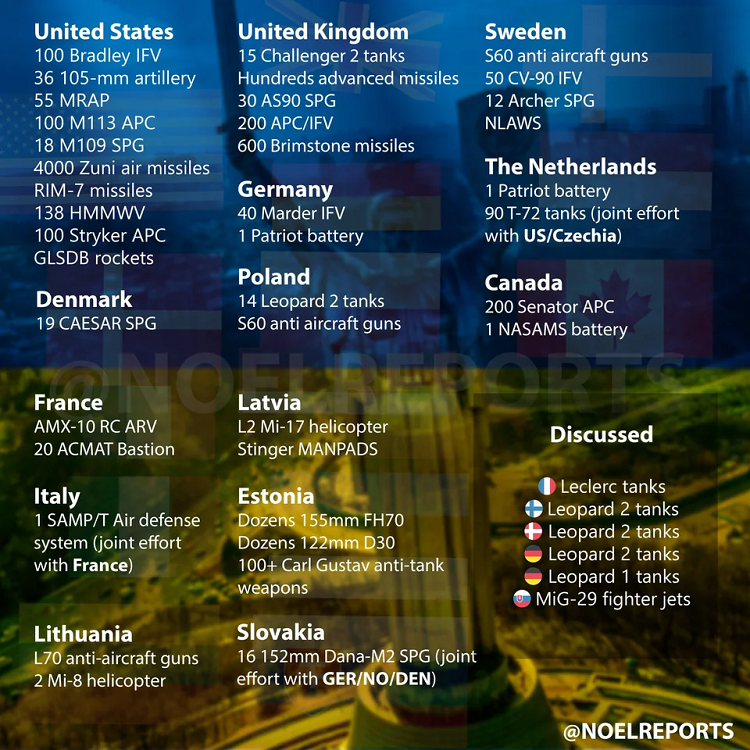 A key trigger for this is the subhuman Russian missile attack last Saturday (1/14) on an apartment building in Dnipro with dozens of men, women, and children senselessly slaughtered. 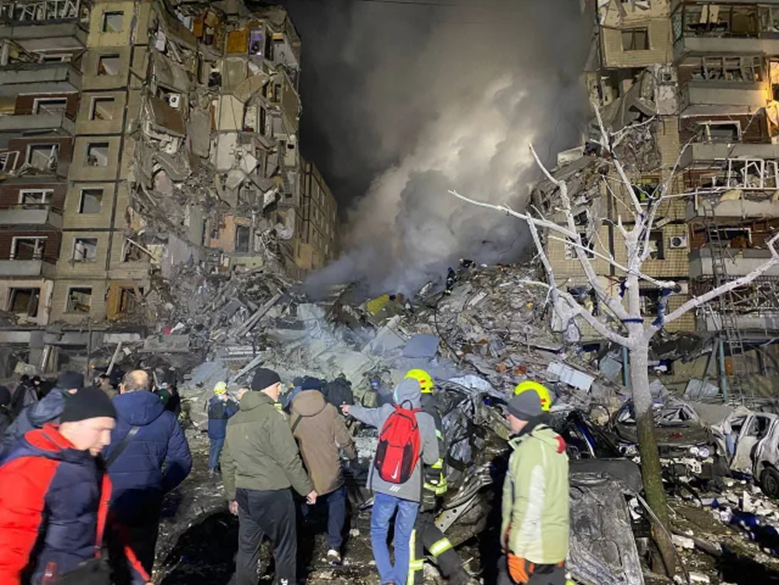 “I want to say to all those in Russia and from Russia, who even now cannot utter a single word of condemnation of this terror, although they see and know everything very well. Your cowardly silence, your attempt to ride out what is happening, will end with these same terrorists coming for you one day. Evil is very sensitive to cowardice, evil always remembers those who fear it and try to plead. And when it comes for you, there will be no one to protect you.“

Let me state this clearly. Anyone who roots for Putin’s Russia has lost their soul. Anyone who doesn’t feel in their heart admiration and prayers for the bottomless heroism of the Ukrainian people and their leader has lost their moral compass.

Further, they are soon to fall off a cliff of grief, for Putin’s Russia is headed for defeat.  And not just in Ukraine.  Right now, there are entire detachments of soldiers from all over Russia fighting on Ukraine’s side – from the Caucasus, Middle Volga, and many ethnic Russians from Russia itself. Here’s one example, the photo taken this week: 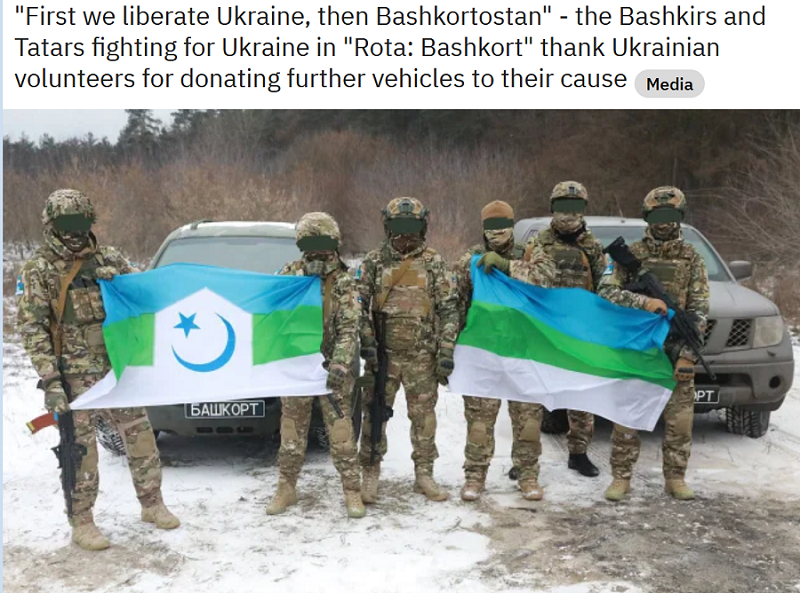 Here are the six republics in Russia’s Middle Volga: 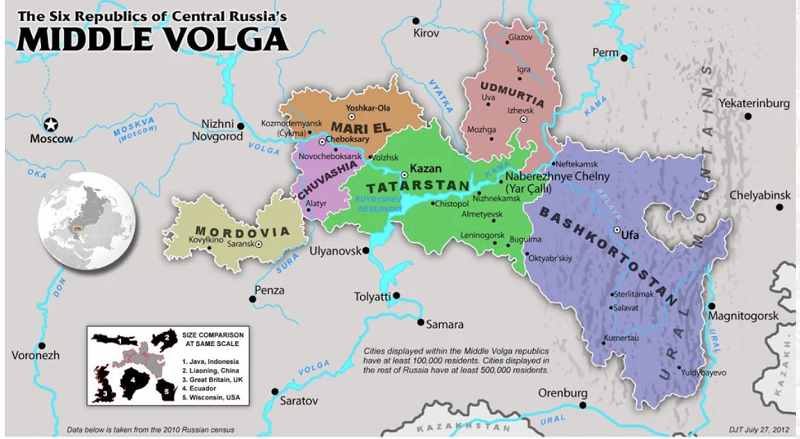 Ethnic Russians are in the minority throughout the region.  By far the largest in population and critically important to Russia’s economy are Tatarstan and Bashkortostan – for they have lot of oil, easily extractable with no permafrost like in Siberia.

At the first opportunity, when they see that Russia’s military defeat in Ukraine is certain (i.e., even before full actual retreat from Donbas and Crimea), they are going to declare their outright independence with full ability to military defend it. 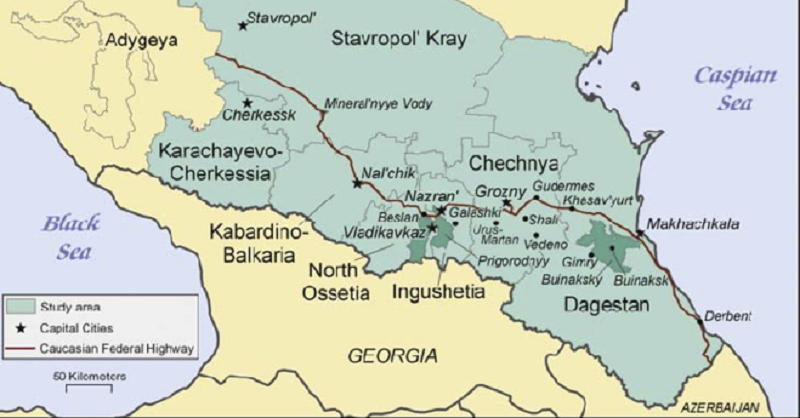 Russia has been fighting to suppress rebellions here for almost 200 years.  The ones who will bolt immediately like the Tatars and Bashkirs will be Dagestan, Chechnya, and Ingushetia.

In these two regions the disintegration of Russia will begin. Then it’s only a matter of time when Xi’s China moves to recover Eastern Siberia from Russia.  What’s left of Russia will never be a threat to Ukraine or Europe ever again. Much less the United States. 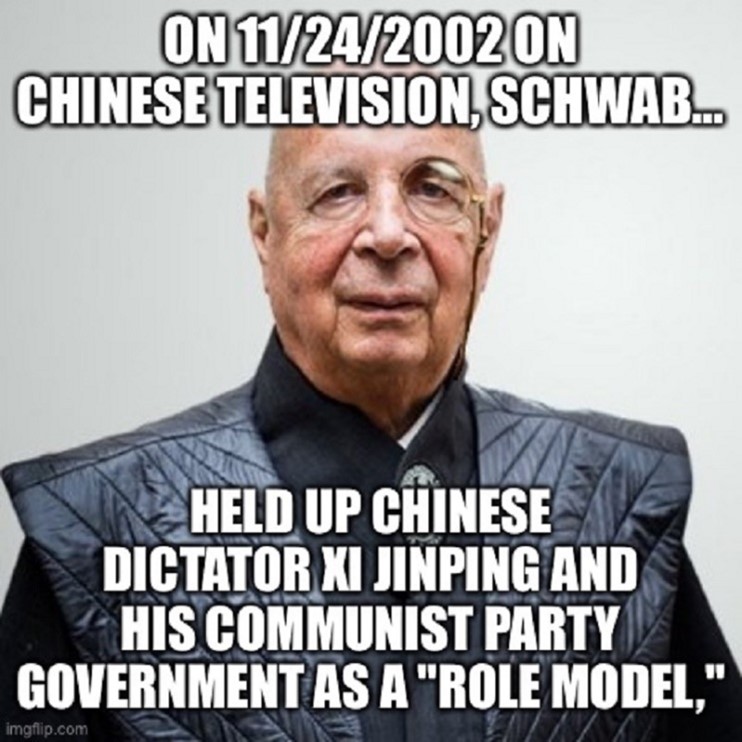 There’s more really good news.  The Klaus Schwab-WEF-Davos crowd has shot its bolt.  No one really cares anymore about their silly conference this week except unhinged lunatics like Algore, some German who demanded a billion people stop eating meat (not him of course), the Marxist president of Colombia proudly announcing his country would commit economic suicide in order to prevent the Earth’s extinction, while Schwab claimed the world’s only hope was a partnership between the WEF and Chicom China. 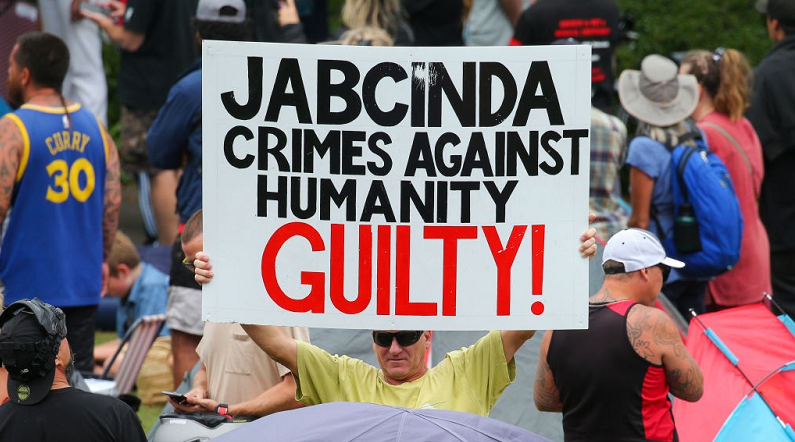 And more great news from RDS’ Florida: Florida College System Presidents: We Will Not Support CRT on Campus.

Plus: BlackRock Caves To DeSantis Over ESG.  RDS – Ron DeSantis is The Man. 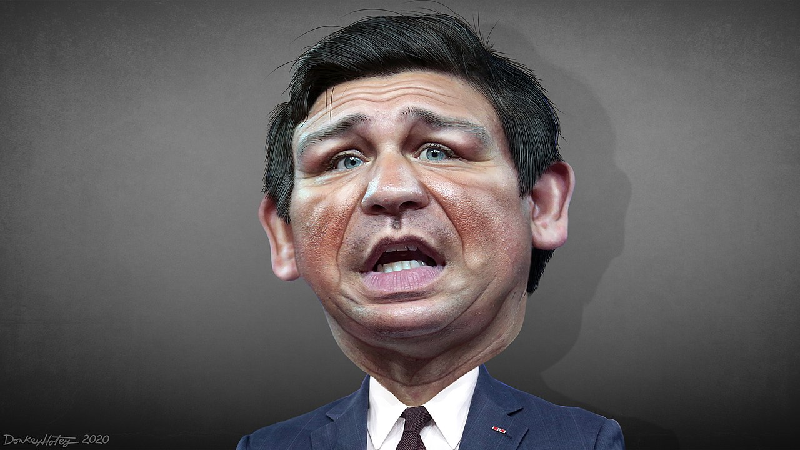 So there’s your Optimism Cocktail for this week – just combine Skye’s Links yesterday with the HFR today, relax and enjoy!  And to spice the enjoyment up, be sure and say Aloha! (means both happy to see you and have a nice day in Hawaiian) to everyone you see from now on. (Click the link to see why…)