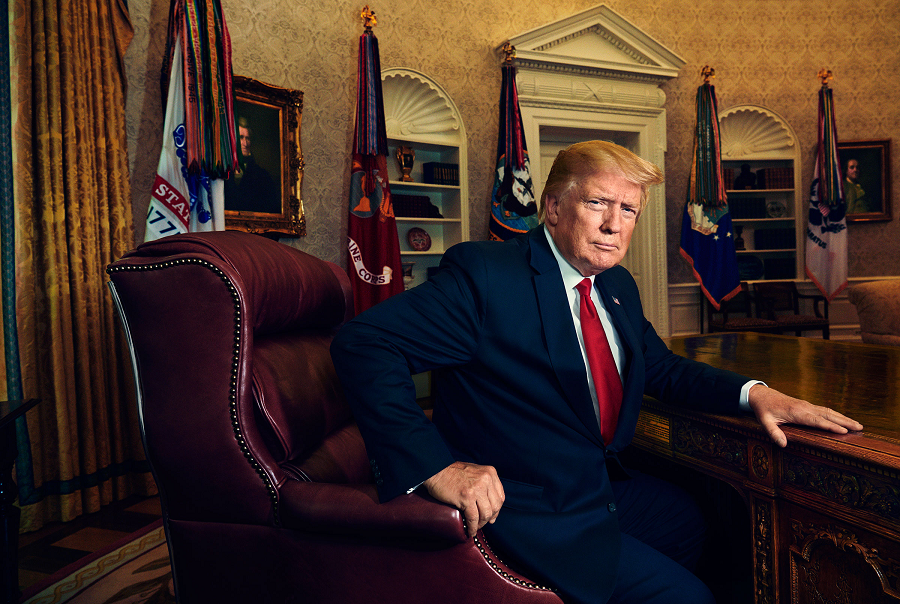 This is where he belongs, at the Resolute Desk in the Oval Office, where he was elected to remain last November 3  for another four years – yet this is the last HFR we will see him there.  By the next HFR, in his place will be a thief who has stolen the Oval Office from him.

Let’s start by dispelling a delusion.  It is this: 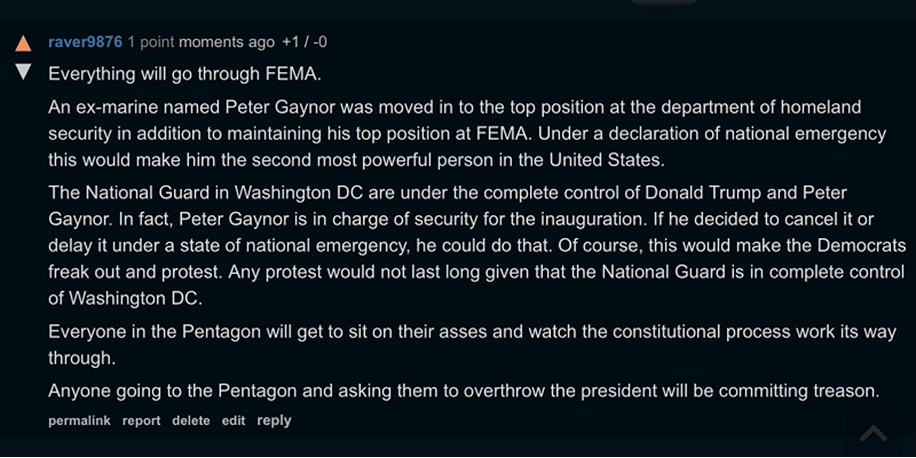 Nothing like this is going to happen.  The entire Deep State – most especially the FBI, CIA and the top Pentagon brass – is aligned against POTUS.  It is impossible that this could be planned without a flood of leaks, which have not occurred. QED.

I wish with all my heart that this will happen next Wednesday, but it won’t.  Please don’t set yourself up for another heartbreak.

So what’s going on in Washington DC, with 20,000 armed troops on the streets authorized to use lethal force?

It’s not POTUS’ Hail Mary – it’s the Desperation Hail Mary of the Democrats.

Last week’s HFR talked of the Antifa agent provocateurs who organized and led the “storming” of Capitol Hill on January 6.  The evidence for this has accumulated since.

*An eyewitness account of the provocateurs by Mike Waller, a good friend of over 30 years.

The purpose of besieging Capitol Hill precisely as the challenges to the Electoral Vote count began, was to prevent the millions online or viewing from seeing the incontrovertible evidence of vote fraud presented.  Then to flip the scenario from Dem election theft to portraying Trump supporters as “domestic terrorists.”

Here’s a current story now up on NBC News: Pro-Trump rioters plan second act — but not just in Washington.

“Federal and state law enforcement agencies are bracing for violence planned by radical conservatives and extremists in Washington in the days before the inauguration. And while significant preparations have been put in place around the U.S. Capitol, there is growing concern that statehouses around the country will be targeted, many of which have already been the scene of armed protests, arrests and violence.”

Yes, you read that right, the “armed protests, arrests and violence” of Antifa and BLM over the past months are now blamed on “radical conservatives and extremists.”

Last night on CNN, idiotard Don Lemon accused every voter of Trump to be a member or ally of the Ku Klux Klan.

Even the Pentagon has gone hard core Libtard.  This today (1/15) from Defense News: The military knows it has a problem with domestic extremists, white supremacists 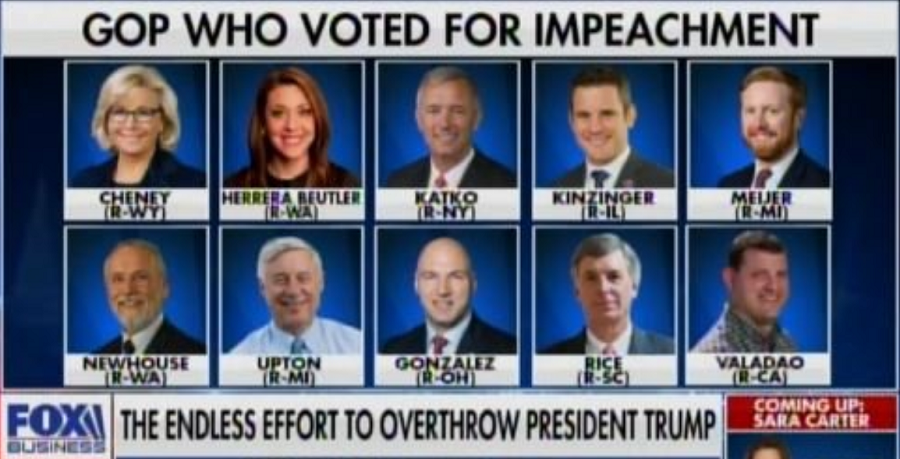 Actress Rose McGowan sees through all of this:

“This impeachment is Cult propaganda. A theater of mass distraction. US cult members on the left will cheer, those on the right will be in a fury. And the country’s starving, sick & poor will sink farther & farther. Good thing the Elites are leading us!

“Democrats need to keep talking about Donald Trump, next week and forever if they’re going to keep their own party together.

Most political coalitions are built on shared interests. The Democrat coalition is built on shared genetics. The basic idea is that everyone who is not a straight white man must be united as one in unshakable solidarity. The problem is that can’t happen because it’s not true.

In real life, many Democrats have nothing in common with each other. Once Donald Trump leaves the scene, the great unifier, and it’s time to divvy up the spoils of the United States Treasury to begin the great pinata party of 2021. Various components within the Democrat Party, the fabled communities you hear so much about will turn on each other with feral ferocity. You can see glimpses of it now, it’s going to be highly ugly.

Democrats would like to delay that disaster as long as they can, so they need to keep Donald Trump at the center of the conversation.”

Yet that’s just one of many disasters facing the Dems.  At all costs they must cover-up their wholesale theft of Trump’s Presidency; their fascist lockdowns destroying millions of jobs and businesses; the hyperinflation sure to come from spending ever more trillions printed from thin air; the collapse of the dollar and the DOW.

So what has already begun is straight out of Orwell’s 1984:  Two Minutes Hate towards a real life Emmanuel Goldstein and his supporters: Trump and his, meaning all 100 million of us.

Then there’s one more Dem disaster:  in both the Senate and the House, they are holding on to power by the skin of their teeth.

In the House its 222D-211R with 2 vacancies – Louisiana 5th due to GOP-elect Luke Letlow’s tragic death, and New York 22nd, where GOP Claudia Tenney’s 29-vote victory is being challenged.  A GOP replacement for Luke is a shoo-in (election on March 20), and Tenney should prevail next week.

So the final result should be 222D-213R – and you can bet Kevin McCarthy will be wooing a number of Dems sick and tired of Pelosi over to his side of the aisle.  Regardless, a majority that thin means any small handful of Dems can threaten to vote down a Pelosi bill unless they get their way – and there will be lots of such handfuls.  It will be chaos she’ll be helpless to control.

In the Senate with the Chinese paying off the GOP Gov and SecState in Georgia to allow the theft of the two elections last week, as you know it’s a 50-50 tie.  This result is an opportunity for West Virginia Dem Joe Manchin.

He’s the most conservative Dem in DC – albeit that’s a low bar.  A horde of West Virginians are begging him to switch. He knows if he doesn’t he’ll just be a Dem gadfly – but if he does he’ll be the Senate’s power-broker, de facto Co-Majority Leader with McConnell (who know he’ll be schmuck Minority Leader without him).

This happened exactly 20 years ago in the 107th Congress.  At the start In January 2001, the Senate was split 50-50.  Then in May, Milquetoast RINO Jim Jeffords of Vermont switched from GOP to Indie, caucusing with the Dems to give them majority.

It could happen again, the other way around.  The best case for his switching was made on Monday (1/11) by the Issues & Insights Editorial Board: An Open Letter to Senator Joe Manchin: It’s Time To Switch Parties.  It’s a must-read.

One question a lot of you are asking now is:  How could Providence have allowed this to happen?

It’s a good question, one for which I assuredly have no pipeline to a definitive answer.  We could ask in return, How did we, the American people, allow this to happen?

The slow, steady and unrelenting slide into Gomorrah, into cultural filth and fascist corruption, has been going on for a long time.  We had our chance to stop and reverse it, and didn’t.  Now along comes a Providential gift of a President whom we expected to be a savior with a silver bullet to solve everything.  Yet he is only human, trying his heroic best surrounded by enemies and Judases, alone and betrayed in the end.

Now we pay the price.  Life in America is going to be hell now.  So the question is, What are we going to do about it, instead of expecting Providence to come to our rescue?

We start by realizing that our enemies are fragile. They have no answers on how to better our lives, they are fascists who only seek power over us.  They are without legitimacy.  Their claim to rule our lives is fraudulent.

Further, they have weaknesses, mortal vulnerabilities.  Moreover, when the vulnerabilities of a fragile system are focused upon and stressed, the system cannot absorb and adapt to the stresses upon its lines of potential fracture.

Put a sturdy water glass on a shelf and it can stay there in one piece for a long time.  Start putting stress on it and it will resist the stress, unbending and unyielding – until it can no longer.  One moment it is as sturdy and unchanging as before, and suddenly in an instant it shatters in pieces not to be put back together again.

This is precisely the strategy used to successfully shatter the Soviet Union into pieces.  We can employ the same strategy to the domestic enemies of America.

We do not have to do this to America itself, for we have a Constitution perfectly adequate for keeping us together in freedom, security, and prosperity if properly adhered to, restricting the federal government to strictly its enumerated powers.

But we can and must do this to the Democrat Party, to the RINOs of the GOP, to the Corruptocrats of the Deep State, to the Barons of Big Tech and Big Media.

One primary way is organized and purposefully focused mass peaceful civil disobedience.  Starting next week TTP will feature a series of articles on how to do this.  In the coming weeks and months, TTP will be devoted to exploring other ways of maximizing fascist fragilities.

You can count on this:  the Xiden-Da Ho Administration is going to be absolute total FUBAR.  They in cahoots with Pelosicrats and Schumercrats are going to screw up everything possible.  It will be Hell with comic relief.

So enjoy these last days of an America that will be gone at noon next Wednesday (1/20).  It will then be up to us to rescue America and then make it great once more.