GEORGE SOROS IS A TERRORIST

[ssba]Ereyesterday (01/31), I spoke at a meeting on Capitol Hill on Terrorism in the Balkans.  Representatives from 13 European countries were present, together with several US Congressmen and Senators. 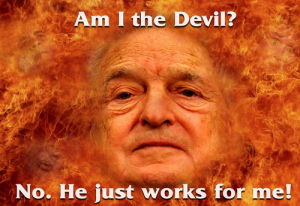 The presentations were focused on the threat of various Islamofascist groups such as ISIS and Iqwan (Moslem Brotherhood), plus lone wolf Salafis.

I decided to focus on something else.  Here’s what I said:

‘Terrorism’ takes many forms.  There is the horrific form of ISIS with publicized beheadings, the senseless slaughter of random ‘infidels,’ the infiltration of Moslem ‘refugees’ who proceed to demand Sharia law in non-Islamic lands.

There is another form of terrorism that I would like to address – and that is the purposeful undermining of democratic institutions within targeted countries, the destruction of a country’s culture and moral values, accomplished through bribery and corruption of a targeted country’s politicians, academia, and media.

This form of terrorism is more dangerously insidious than its Islamic counterpart – for it subverts a country’s own people to become traitors to themselves, to their own land, to their own culture, to their own values.

The world’s number on perpetrator of this form of terrorism – which I call Fascist Subversion – is the world’s most evil billionaire, George Soros.

Such a threat that he funds hundreds of Radical Left organizations in America, many of which promote and engage in organized public violence, such as Black Lives Matter.

On Sunday (01/29), Reuters reported that President Trump is considering designating the Islamist organization Iqwan Muslimi, the Moslem Brotherhood, as a “terrorist organization” – which it clearly is.  Such formal designation would make any political or business contact with Iqwan a punishable offense under U.S. law.

I would propose that President Trump consider designating George Soros and his Open Society Foundations a terrorist organization.  George Soros is a terrorist as dangerous to our country as ISIS or Iqwan if not far more so.  He needs to be publicly and legally regarded as such.

As the meeting adjourned, I lost count of the number of attendees who approached me with a smile and a thank you handshake.

These were people desperately concerned over the efforts of this evil man to destabilize and ruin their countries.  We should feel the same.

As you are reading this, Soros and his minions are engaged in an all-out effort to have federal employees sabotage their own agencies as a protest against Trump.  Yes, all these ‘crats should and will most likely be weeded out and fired, but that will take time.  Meanwhile, they will be doing their utmost to ruin anything Trump tries to do.

The silver lining is that this provides another justification for legally designating George Soros a terrorist and his OSF a terrorist organization.  Take another look – a good look – at that list of Soros-funded groups linked above and here again.

Now imagine the wholesale devastation of the Left if all of these lost their funding and ceased to exist (or at least severely weakened).  In one fell swoop, that would happen with a Soros/OSF terrorist designation.  It could be a mortal blow, a career-ending injury, to much of the Left in America.

George Soros is a terrorist.  Let’s make that official.  Let’s rid the land of his evil.  It’s one way to make America great again.