“Nearly all men can stand adversity, but if you want to test a man’s character, give him power.”
― Abraham Lincoln

As the nation deals with covid19, some state governors, mayors, police and sheriffs have become tyrants, drunk with their sudden grasp on power.  Most, but not all, are Democrats of course; it is their nature to wield power over others.

The American Democrat party has moved so far left that it can truthfully be called Marxist… and Marxism is totalitarianism.  As Thomas Sowell observed long ago, “…totalitarianism recognizes no moral limits on the state.  It’s the most convenient ideology for aspiring tyrants….”

As state governors like Gov. Gretchen Whitmer of Michigan are discovering, citizens in her state (both chambers of the state legislature are Republican) will not accept being told what they can buy, where they can go, and if they can or cannot drive to their cabins on the lakeshore.

This woman, in true dictator fashion, has told the citizens of Michigan what is and what is not “essential.”  Major stores that sell food and other goods have had to cordon off all products she has deemed not essential:  plant and vegetable seeds, appliances, baby car seats, etc.

It’s a long list.  Just who is she to decide for the rest of her constituents what is essential?

Whitmer, who was on the short list to be Biden’s running mate, has blown any chance she had of being considered anything but Napoleonic in nature. Ten thousand people (nearly all in cars) in cars surrounded the Michigan statehouse on Wednesday (4/15) to protest her commands. 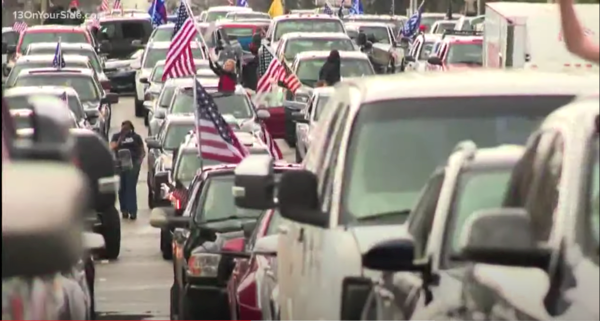 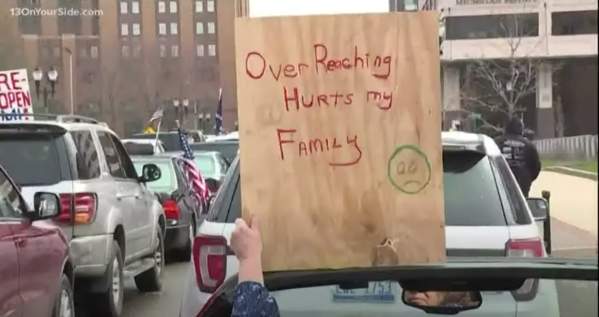 Whitmer dismissed  these people as dangerous because they were not all wearing masks or staying six feet apart from one another.  But those people are mad; so are people in other states suffering under these draconian decrees that have imperiled the nation’s economy, education, and all the freedoms guaranteed by the First Amendment.

The courage of those Michiganders should be heralded by us all and we should all follow suit.

This latest ploy by the left to defeat President Trump is way beyond the pale.  They really are willing to destroy the country if it means getting rid of the best President since Reagan.

POTUS, however, has played along for a bit too long.  It is time to put the catastrophists in their place.  This shutdown of the economy will prove to be far worse than the effects of covid19.  Far, far worse.

It will cause more death, more bankruptcies, more poverty, more family dissolution.  The Democrats know this but do not care.  They are rabid with hatred for this man who accomplished in three years what Obama could not in eight; he revitalized the economy and made American energy independent.

We’ve all heard about the mayor in Kentucky who ticketed those who attended an Easter church service in their cars.  He had even put nails on the street and parking lot!  Thankfully, the DOJ has convinced that mayor to invalidate all those tickets.  The only people not social distancing were his policemen.

Then there is the man who was arrested in Malibu for paddle boarding by himself in the ocean!  In Arkansas, uncivil civic leaders removed a public basketball hoop after a twelve-year-old girl was seen using it by herself.  In New Jersey and numerous other states, pot shops and liquor stores are open, but church services are banned.

And there are always those self-appointed enforcers in every neighborhood who want to arrest anyone walking or biking unmasked.

This flu has brought out the worst in some people, the best in others; our doctors and healthcare workers, truckers, grocery store employees, et. al.  are heroes.

But without a doubt, it is the leftists among us who are dictatorial.  Polls show that it is Democrats who favor mandatory testing, immunity cards, ankle bracelets, quarantine and fines, edicts reminiscent of every communist country throughout history.  Those who resist their commandments must be punished.

We are hovering on a fragile tightrope between freedom and fascism and it is those on the left who are pushing for fascism.  They cannot be allowed to win this round of Trump derangement.  We must all fight back like those protestors in Michigan. This massacre of our economy must stop.

It is not about health.  Everyone knows by now that most of the covid19 fatalities suffer from one or several “co-morbidities,” most commonly obesity, heart disease and diabetes, but the CDC has directed all doctors and hospitals to log every death as death by covid19.  Medicare will pay more for a covid19 death.  It’s all a scam.

John Hinderaker at Powerline nailed it with his must-read column, The curve never needed to be flattened.  The numbers of hospitalizations and fatalities from this flu are dwarfed by the numbers of previous epidemics.

On TTP, Michael Thau exposes the fact that all the stats we are being fed are fraudulent.  “Around 2000 Americans on average die in hospitals every day. So, from March 13 to April 11, at least around 60,000 people should have passed away in hospitals from causes other than COVID-19.”  They did not. Suddenly no one is dying of cancer, heart disease, diabetes or stroke?

We are all being lied to; this is the left’s most recent attempt to prevent Trump’s re-election.  They are ready and willing to cancel all sports and music events, to extend the closure of all schools, all non-essential businesses to stem a flu that is far less serious than previous years.  That is how badly they want to defeat Trump.

“It is hard to imagine a more stupid or more dangerous way of making decisions than by putting those decisions in the hands of people who pay no price for being wrong.” Thomas Sowell

Trump has given Drs Fauci and Birx a great deal of respect; he has listened to them and followed their advice.  But Fauci called the shutting down of nearly all economic activity “inconvenient.”  Nancy Pelosi tweeted out a video of herself in front of her $10k double refrigerator stocked with high-end ice cream to demonstrate how easy it is to self-quarantine!

It was yet anotherr of her “Let them eat cake” moments. 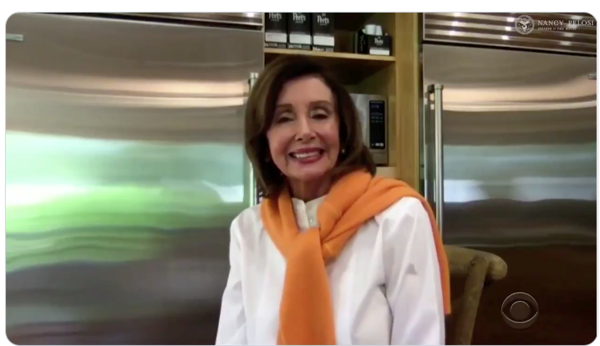 We all have found our ways to keep our spirits up during these trying times. Mine just happens to fill up my freezer. #LateLateShow pic.twitter.com/dqA32d5lU1

Now we know why the French invented the guillotine.  People like Pelosi inhabit such a rarefied world of wealth and privilege that they have absolutely no sense, nor do they care, about what their ongoing destruction of the economy is doing to countless millions of Americans.

They care only about regaining their full power over the government of the United States and the furtherance of their anti-Constitutional, socialist agenda.  Pelosi is even blocking further aid to small businesses unless she can pack the bill with her personal wish list, items having nothing whatever to do with this pandemic.

If it was not clear before that she is as heartless as any human can be, it should be obvious to everyone now.  She is a vicious pol without a shred of humanity.

The President must put a stop to this nonsense now.  Encourage the Republican governors to open up their states and let the Democrat governors keep theirs captive to Trump derangement.  Maybe then we will see which party Americans will elect in the future.

Sure, the Democrats pander to those who want and depend on government handouts but chances are millions of nominal Democrats throughout the country will finally realize that the party of JFK has morphed into the party of Marx, Lenin and Stalin.

Two generations of young people have not been properly educated as to the horrors of communism.  They do not know that:

“There has never been a humane communist regime.  Marxism is inherently totalitarian.  It recognizes no moral limits on the state.  It’s the most convenient ideology for aspiring tyrants; it also retains its appeal for intellectuals, who have proved equally skillful at rationalizing abuses of power and at exculpating themselves.”  (Joseph Sobran)

Let the left power-abuse themselves to death.  Like Obama, the intent to transform America into something it was never meant to be is alive and throbbing in the Democrat party.

But this great nation is chock full of freedom-loving people.  These people will not likely sacrifice their beloved country to the likes of Gretchen Whitmer who lacks not only character but love of country.  She and her ilk do not have the American people’s best interests at heart.  They just crave power and have the will to abuse it.

But we won’t let the get away with it, will we?