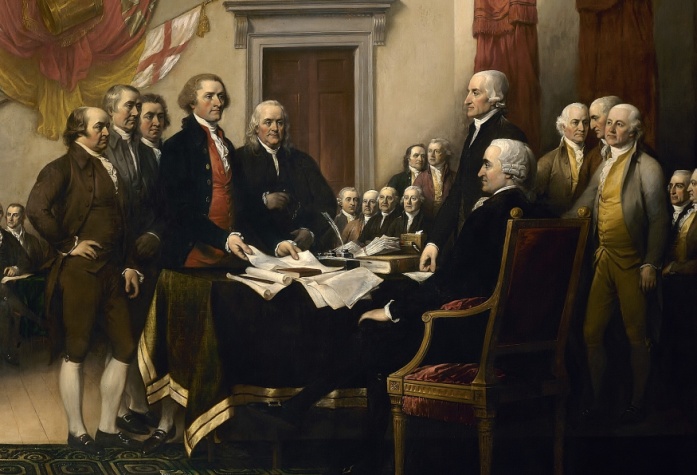 [This was originally in To The Point for July 4, 2004. This is the version for 2018.  We at To The Point wish all of you an exceedingly happy Fourth of July.]

July 4th is Freedom’s Birthday. My suggestion is, amidst the fireworks and barbeques and flag-waving fun – all of which are great – that you take the time to feel good about America.

Take the time to read the Declaration of Independence aloud with your family.

One reason is that, for all your worries about America’s culture and morality, you and all your fellow conservatives can feel good about your country. Liberals can’t. One of the defining characteristics of leftie-liberals is an inability to feel truly proud of their country – proud to the bone.

You cannot be a liberal without feeling apologetic and embarrassed over being an American. You cannot be a conservative without lacking any such embarrassment or compulsion to apologize at all.

That is why the Left is filled with so much hate and rage towards President Trump – and why we feel so much affection.  The Left doesn’t want to Make America Great Again – and we do.

The self-hating Left can’t stand it that being an American is simply the coolest thing on earth. Wherever I have traveled in the world, whenever someone asks me, “Where are you from?”, it’s always such a thrill to answer, “America – I’m an American.”

I’m an American. Say it to yourself. Doesn’t it feel fantastic? It’s a feeling liberals can never have.

You travel around the world and you see the remnants of history’s great civilizations. You walk through the preserved wreckage of Rome’s Imperial Forum or the Acropolis of Ancient Athens and you wonder — what was it really like to be here when these civilizations were at their peak?

You can do that today in Washington DC — or your hometown.

Someday in some future epoch, history will have moved on, and there will be distant centuries between that time and the American Era. People will then look upon America as we do upon ancient Egypt or Greece, and will do so with same wonder and awe.

I suggest you look upon America with that wonder and awe now.

There is so much to love about our country, so much to feel good about. Despite all the residual indecency from the Nightmare of Obama and the increasing insanity of the Hate America Left that can drive you crazy, there is so much decency and moral goodness in America that it just takes your breath away.

America is the most moral and humanitarian nation ever to exist – because of the founding principles of our country that we celebrate today.

And more, much more.  That the only – only – moral purpose of government is to protect and enable the exercise of these sacred rights of its citizens.  Any other rationale for government guns and power over its citizens is immoral and illegitimate.

Thus what we celebrate today is the essence of our existence as Americans.

That essence lies in our Declaration of Independence.  It is not simply a declaration of Colonial America’s collective freedom from the rule of England and its King.  It is also a declaration that every individual American is free to choose how to best pursue their goals in life honestly and peacefully.

It is a declaration of the morality of freedom, freedom for each and every human being.  That is why the America’s Declaration of Independence, publicly declared on July 4, 1776, is the most moral political document ever written in human history.

I believe that the single most important thing to teach your children or grandchildren on this day is to understand and have the deepest respect for the moral essence of their being American.

The incomparable gifts America has freely given the world — of the principles of the Declaration of Independence, of proclaiming that all human beings have a moral right to their own personal happiness, of capitalist wealth and scientific progress throughout the world, of sacrificing oceans of blood to end Nazi and Tojo tyranny, of oceans of treasure to assist other countries and foreign peoples, of ridding the world of the curse of the Soviet Union, on and on and on — are incalculable.

Today we get to celebrate America’s moral decency.  We get to revel in America’s historical greatness.  For those who out of envy of America resent that greatness, or who out of a fear of those who envy America can’t admit that moral decency, it’s their misfortune, not ours.

Today, I want you to have a fearless Fourth of July. You need have no fear for America. Rest assured that America’s fundamental goodness will triumph. The time of our culture’s moral regeneration with President Trump is at hand. There is so much to feel good about being American in 2018. There is so much to celebrate on Freedom’s Birthday.

That’s what to consider as you read the Declaration of Independence with your family today.  Have a wonderful, joyful, and happy Fourth of July!