FOUND! SOMEONE MORE NARCISSISTIC THAN OBAMA

They thought it couldn’t be done.  It was humanly impossible, declared a global consensus of psychologists and psychiatrists, to be more narcissistic than His Ultimate Excellency, the American Messiah Himself, Barack Hussein Obama.

It took an Englishwoman – what else? – to prove the experts wrong.  She has taken self-love to its ultimate extreme by marrying herself in an "incredibly empowering" ceremony attended by almost 50 of her friends.

Grace Gelder married Grace Gelder at an "idyllic farmhouse in rural Devon." Her parents were not present – "mainly for logistical reasons" – but, according to an interview this week (10/04) in the Guardian, they did send "supportive texts throughout the day."

Here’s the bride/groom tossing her wedding corsage to her admirers: 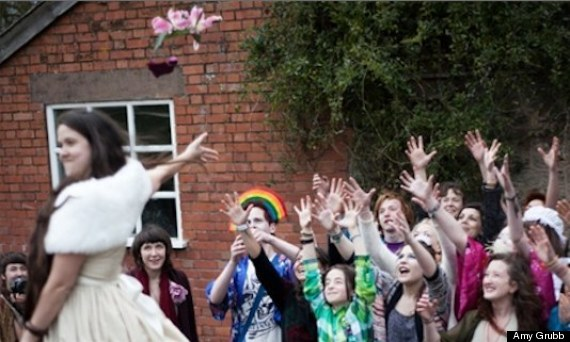 Some of Ms./Mrs./Mr. Gelder’s friends suggested "in a light-hearted way" that perhaps the exercise was "a bit narcissistic". But she herself decided that she was "completely comfortable" with her "motivations."

It helped that she had recently been "on a journey of personal development using meditation, dance and performance" to increase her "self-awareness," especially a Shakti Tantra program "focused on sexuality and how this was bound up with making agreements with yourself and other people."

Furthermore, she benefited from the support of her close friend Tiu, a "truly wise and wonderful woman" who put her mind at rest when ever she harbored thoughts like "[is] it just some vainglorious stunt."

Gelder proposed to Gelder on a park bench on Parliament Hill in London last year, inspired by a line from a Bjork song she had heard at university while studying performance art. The song, called Isobel, went: "My name’s Isobel, married to myself."

She thought: "crazy as it sounds, I totally get that. It’s about making this pact or promise to yourself and then somehow enacting that in how you live your life from that day on."

On the big day, Gelder wore a vintage wedding dress bought in the local market and a ring to bring home the "idea of commitment, sealing the deal if you like." After making her vows ("which were mostly about me promising to take more risks in matters of the heart"), she kissed the bride/groom/whatever in a mirror.

Her self-married status, she is aware, carries no legal standing. But one happy result of this is that in the unlikely event she ever tires of her own company — "just because I married myself doesn’t mean that I’m not open to the idea of sharing a wedding with someone else one day" — she will not technically qualify as a bigamist.

So now we know what it takes to exceed President Hussein’s narcissism.  It’s quite an achievement.  Undoubtedly it qualifies for entry into all the psychology textbooks.

Congratulations, Ms./Mrs./Mr. Gelder!  We’ll be sending you an appropriate marital aid with which you may achieve your marriage’s self-consummation.

British writer James Delingpole is the author of such "fantastically entertaining" books as 365 Ways to Drive a Liberal Crazy, and Welcome To Obamaland: I’ve Seen Your Future And It Doesn’t Work.