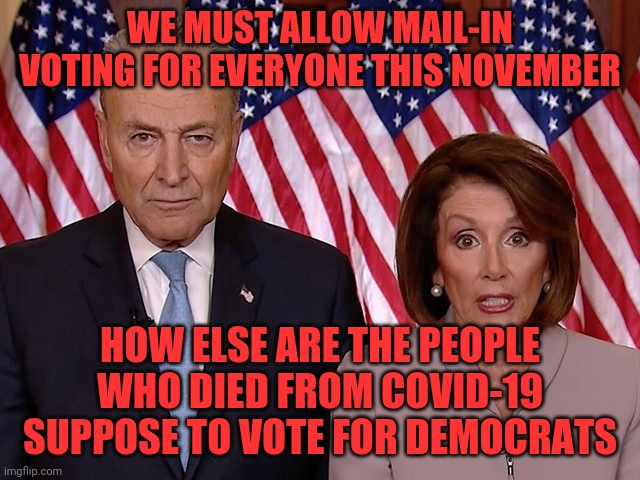 And every illegal alien too

America has been one of the few countries in the world that can boast about the peaceful transition of power for 220 years.

Even Obama left the White House peacefully, although it turned out that he’d weaponized the administrative state to undermine his successor’s ability to govern.

With this next election, though, Democrats and their militant front groups Antifa and BLM are laying the groundwork for a violent post-election period, something that will destroy the American political compact laid out in our Constitution.

As always, things make more sense with a little context. In 2000, Al Gore refused to concede, questioning whether Florida had voted for George W. Bush or him. The eventual recounts (plural), followed by appeals to both the Florida court system, and the United States Supreme Court, finally ended on December 13, when Gore was legally forced to concede the election to Bush.

It was a tremendous period of disruption and uncertainty caused by just one state.

In 2016, as you all recall, President Trump looked at the rules under the Constitution for winning the presidency and embarked upon an innovative election strategy that saw him working on getting more Electoral College votes than popular votes.

Unlike Hillary Clinton, he understood that the presidency is not a popularity contest across the entire nation. Instead, to ensure that a presidential candidate has to court all the states, not just the populous ones, our election is really 50 separate state elections (plus the territories and D.C.).

Hillary still can’t get over the fact that her arrogance caused her to ignore the constitutional rules. Although she’s finally figured out that the Electoral College controls the election, she did an interview that sees her projecting Democrat dirty tricks onto Republicans:

“With the conventions out of the way and the election only 65 days away, 2016 nominee Hillary Clinton has some advice for Joe Biden: Don’t concede in a close race.
She tells @jmpalmieri why Dems need to stay vigilant about GOP strategy come November: pic.twitter.com/vepiMWXsWh

Hillary recounted the dirty tricks that “Republicans” are going to do. She also conflated absentee ballots, which have a long and stable history, with mass mailing elections, which are so vulnerable to fraud that there is no election integrity at all. But it’s Hillary’s wrap-up that counts:

“Joe Biden should not concede under any circumstances because I think this is going to drag out and, eventually, I do believe he will win, if we don’t give an inch and if we are as focused and relentless as the other side is.”

Everyone who heard Hillary understood that this was the opening salvo in a plan to attack the integrity of the 2020 election.

On Wednesday (9/01), Axios reported on the next phase in destabilizing the American elections.

Keep in mind as you read the Axios scenario what happened in Florida in 2000 during a traditional election. Then multiply that to 50 states, D.C., and the territories in an election that the Democrats have already positioned for fraud via mail-in voting:

“A top Democrat data and analytics firm told ‘Axios on HBO’ it’s highly likely that President Trump will appear to have won — potentially in a landslide — on election night, even if he ultimately loses when all the votes are counted.

Why this matters: Way more Democrats will vote by mail than Republicans, due to fears of the coronavirus, and it will take days if not weeks to tally these. This means Trump, thanks to Republicans doing almost all of their voting in person, could hold big electoral college and popular vote leads on election night.”

We’ve just been given a preview of coming attractions.

Republicans, who have listened to Democrat hysteria about the Post Office, will vote in person, and their votes will be counted promptly. Democrats, who purported to be in a panic about the post office, will nevertheless vote mostly by mail.

Once the in-person ballots are counted, they will have an exact tally of the number of mail-in ballots that are needed in each state to flip the outcome.

The Democrats, however, will need to create a lot of ballots. I do not see how anyone can look at this video and deny, given the enthusiasm all over America for Trump, that the only way Biden can win is through vote fraud.  This the massive welcome the President was given in Wilmington, North Carolina yesterday (9/02):

As matters now stand, the election will be Florida on steroids, times 50 (plus D.C. and the territories). This is the kind of threat to election integrity that can, in one fell swoop, destroy the political system and lead to civil war – and I’m not even close to exaggerating when I say that.