2 The Point News » Adventure/Explore » FLASHBACK FRIDAY: THE TOMB OF CYRUS THE GREAT

FLASHBACK FRIDAY: THE TOMB OF CYRUS THE GREAT 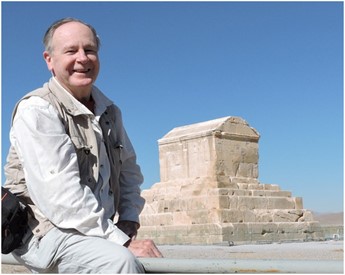 In the vast valley of Pasargadae there stands this simple tomb with nothing around it for miles and miles.  It has been like this for many centuries, for it entombs the founder of Persia, Cyrus the Great (600-530BC).  Revered as the liberator of the Jews from their Babylonian captivity in 539 BC, hailed by Herodotus for his humanity and wisdom, this small structure symbolizes the humility of an extraordinary man.  Yet the tomb is a structure of engineering genius, the oldest built on principles of base-isolation withstanding the countless earthquakes Persia has suffered for the last 2500 years.

I was first here in 1973 when Persia (renamed Iran in 1933) flourished under the Shah.  Here I am in 2014, when everyone I met expressed admiration for America and their contempt for the mullah tyranny they endured.  I hope to return once more when the Land of Cyrus will be free again. (Glimpses of Our Breathtaking World #146 Photo ©Jack Wheeler)