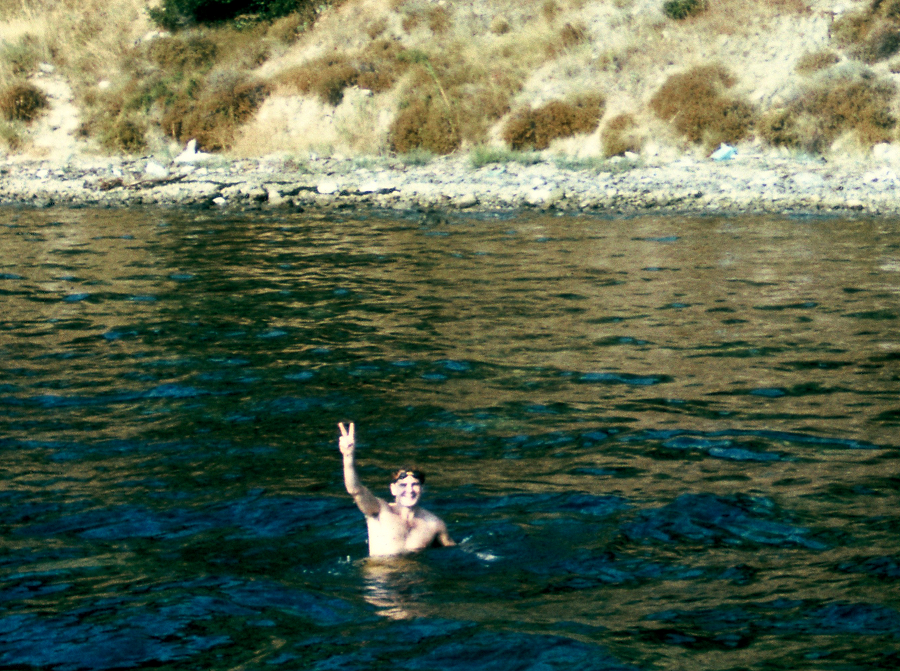 July, 1973. The Hellespont is the famous strait separating Europe from Asia, where the Black Sea after flowing through the Bosphorus at Istanbul and a widening called Marmara empties into the Aegean Sea of the Mediterranean. One of the great stories of Greek Mythology is Leander swimming the Hellespont to tryst with Hero, the woman he loved but was forbidden to see.

Thus he swam at night, and she lit a torch for him to swim to. One night a storm blew out the torch and the strong currents swept Leander onto the rocks to drown. So I first swam the Hellespont at night in 1960 and almost drowned myself (LIFE Magazine, Dec. 12, 1960, pp 91-94).

This was the second time, swimming from Leander’s village site of Abydos on the Asia side to Sestos, Hero’s village site on Europe’s. Here I am having reached the Sestos shore.

The Hellespont is where the Trojan War was fought, where the Persians crossed to lose against the Greeks at Marathon and Salamis, where Alexander crossed to conquer the Persian Empire. Lord Byron swam the Hellespont in 1803 to make all the legends and history a part of his life. I was determined to do the same, twice to make sure. (Glimpses of Our Breathtaking World #100 photo ©Jack Wheeler)