FLASHBACK FRIDAY – RETRACING HANNIBAL OVER THE ALPS WITH ELEPHANTS 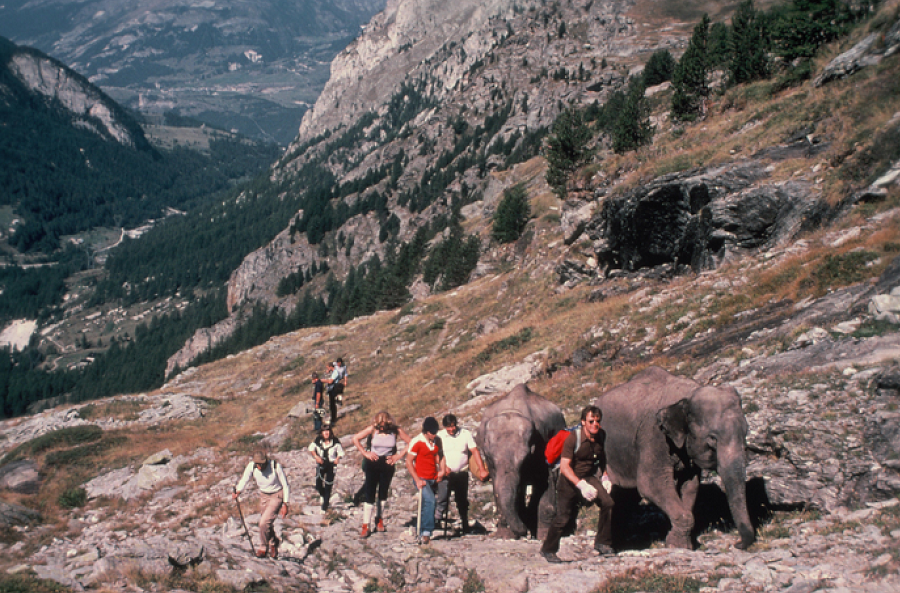 September 1979 – my Hannibal Expedition took two elephants over the same pass Hannibal used in 218 BC across the Alps to attack Rome. There is only one pass that fits the contemporary descriptions of both Greek historian Polybius and Roman historian Livy: The Col du Clapier on what is now the French-Italian border.

Unrecognized as Hannibal’s Pass in 1979, it is still a roadless trail today crossed only on foot or mountain bike. But since our expedition, there are now signs proclaiming it La Route d’Hannibal, and even a life-size statue of an elephant at the French village of Bramans where the track over the pass begins.

The photo you see is us climbing high above Bramans (I’m the one in front with the red backpack). It took us five days to carefully guide our elephants (from an Italian circus) over Clapier and down to the Italian village of Susa. First time in 2,197 years and never repeated 41 years since.

Hannibal’s crossing the Alps with elephants is one of the most epic events of world history. To retrace it yourself with elephants is to make that famous history a part of your life in the most uniquely powerful way. (Glimpses of Our Breathtaking World #15 photo ©Jack Wheeler)