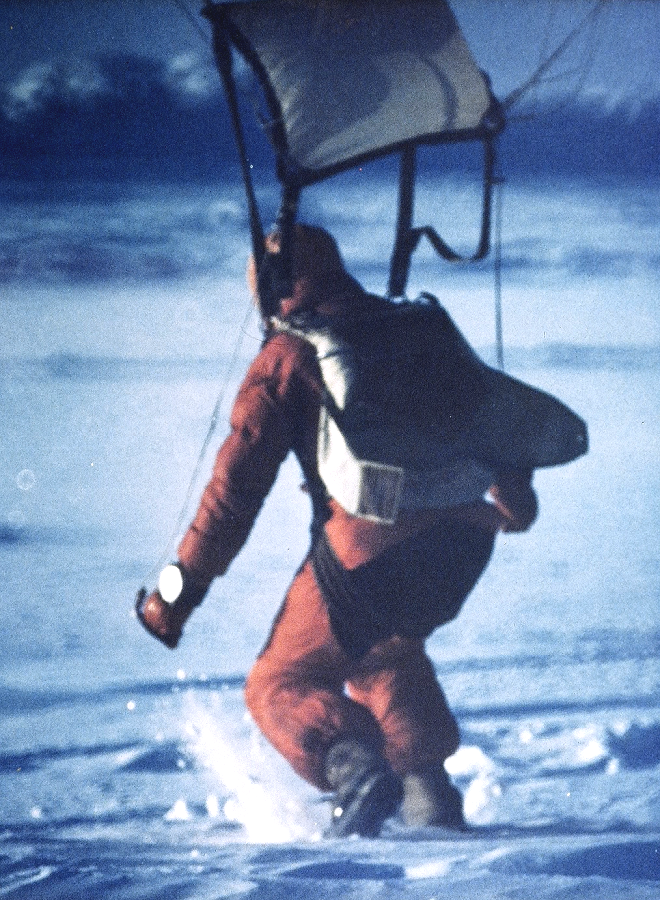 April 15, 1981 – this is the exact moment when I landed on the sea-ice at 90 North latitude, the North Pole, to set a Guinness World Record for “The Northernmost Parachute Jump.”

On a Wheeler Expedition to the top of the world, we landed our ski-equipped Twin Otter on a configuration of ice called an “old frozen-over lead” precisely at 90N.  My clients got out, we took the fuel drums out, rear door off, took off again with me, the pilot and co-pilot.  I had pilot Rocky Parsons go up to 8,000 feet for a mile of freefall, directed him to the spot – tiny black dots of our people on the ice – told him when to cut the engines, and I was out the door.

OMG what a rush, falling straight down on the very top of our planet, a world of ice below – meadows of rubble ice, rivers of open water called leads snaking through the ice, lakes of water called polynyas, pressure ridges of turquoise ice, terminal velocity, back flips, somersaults, fun in the sky.  Altimeter shows 2,500 feet, time to go – pull out the hand deploy, see the canopy furl out in full, grab the hand toggles, spin around for more fun, line it up to come in next to everyone, stand-up landing, Guinness Book.  Totally cool. (Glimpses of Our Breathtaking World #5 photo ©Jack Wheeler)