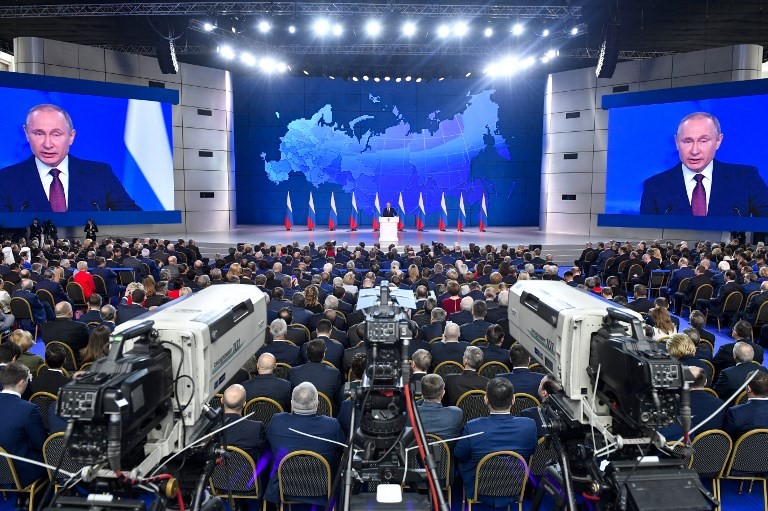 The annual presidential “State of the Nation” address to the Federal Assembly (upper chamber of the Russian parliament) is a big political show in Russia, which tells little about the state of the country but much about the mood in the ruling elite.

The address, delivered by President Vladimir Putin last week (2/20), revealed worries in the Kremlin about the spreading discontent and declining popularity of the leader who took charge nearly 20 years ago (Moscow Echo, 2/20).  His keen attention to particular social problems was supposed to restore the population’s confidence in the benevolence of the supreme ruler (Newsru.com, 2/22).

Putin made no clear attempt to present a coherent ideology purportedly underpinning his reign. Moreover, in his speech, the Russian president only briefly touched on foreign policy. It is, therefore, quite illuminating to note the international matters of major importance to Moscow that he specifically omitted.

At the top of this list of exclusions is certainly the stagnant crisis in relations with Ukraine.

Yet Ukraine is Russia’s most important neighbor, which Moscow deeply alienated by annexing Crimea five years ago, invading and occupying Donbas, and continuing a “hybrid” campaign of aggression against Kyiv.

Ukraine lives under permanent threat of a new Russian offensive, and Putin’s silence is menacing in the situation of deadlocked negotiations and growing international resignation about stabilizing this smoldering war (Republic.ru, 2/21).

Putin conspicuously said nothing about potentially cooperating with the United States and Europe to address global or regional problems, though he elaborated at length on the breakdown of the arms control regime and bragged yet again about his country’s “wonder weapon” projects.

And while implicitly sending an apparent flattering message to US President Donald Trump (“proactive and talented people”), his remarks simultaneously slammed the political elites in Washington for “excessive faith in their exceptionalism and supremacy,” thus betraying the Kremlin’s deep grievance about not being taken seriously as an equal partner in global affairs (Kremlin.ru, 2/ 20).

Yet, it is too obvious that Moscow has nothing to contribute to the resolution of the North Korean problem, while Russia quietly hopes that Trump’s summit with North Korean leader Kim Jong-un will be a flop.

Russia is also irrelevant in the complex reconfiguration of trade regimes, except for sustaining the cartel arrangement with the Organization for the Petroleum Exporting Countries (OPEC) on oil production cuts, to which the US objects (Forbes.ru, 2/19).

One crisis where Russia tries to claim a stakeholder role is unfolding in Venezuela, but the “principled” support for Nicolás Maduro’s regime damages rather than promotes its international reputation (Kommersant, 2/22).

Putin mentioned Syria only as a training ground for the Russian officer corps, avoiding any reference to the trilateral Russia-Turkey-Iran axis constructed for managing the mutating war.

The Kremlin is aware that the declared but elusive Russian “victory” in Syria is not popular at home and sought to hide its costs by promising new funding for domestic social programs (Moscow Echo, 2/21).

Meanwhile, disagreements between the three “strategic partners” are apparent despite all the diplomatic camouflage; so instead of capitalizing on the hard-won success, the Kremlin has to think hard about possible risks of a new escalation of hostilities (RBC, 2/21).

Russian forces in Syria can stay clear from the brewing confrontation between Turkey and the Kurds, but they are exposed to and involved in the clashes between Israel and Iran. Moscow is increasingly uncomfortable with this entrapment (Nezavisimaya Gazeta, 2/ 19).

The threat of terrorism was another issue absent from Putin’s monologue, which drew a record-low TV audience, despite the all usual propaganda hype (Moskovsky Komsomolets, 2/22).

Terrorist attacks are not uncommon in Russia, particularly in the North Caucasus, where gunfights and house sieges occur weekly and no longer attract much news coverage (Kavkazsky Uzel, 2/19).

It has acquired grotesque forms in the North Caucasus, as illuminated by the recent arrest of Senator Rauf Arashukov on the floor of the Federation Council chamber and the exposure of the wealth accumulated by his clan (New Times, 2/04).

Blogger Alexei Navalny, a leader of the opposition who made the struggle against corruption his trademark, followed up with more revelations (Navalny.com, 2/21). Shameless graft is a major factor behind Russians’ growing poverty, which Putin tries to alleviate by palliative measures that are only going to enrich more bureaucrats (Novaya Gazeta, 2/21).

The Kremlin now and again resorts to selective punishment, but public opinion increasingly perceives such cases as evidence of all-penetrating corruption in the government (Moscow Echo, 2/19).

Putin probably understands that corruption has severely degraded his system of power and reduced his ability to govern; however, he cannot convince the elites who loyally applauded his address to curtail their appetites (Newsru.com, 2/21).

What the sum of the stated and omitted priorities in Putin’s address reveal is the recognition in the Kremlin that deepening domestic problems cannot be wished away by emphasizing foreign policy successes.

Whereas, presenting super-missiles as solutions to Russia’s mounting problems—Putin could not restrain his ambitions in this regard—overstretches credulity.

The problem for the Russian head of state is not that he has to focus on matters he would rather ignore, but that these troublesome social problems have no easy solutions. Buoyant promises can help Putin only so much.

And if the Kremlin decides to step up its repression to suppress discontent, additional external distractions and power projections will be needed.