FEARS IN MOSCOW THAT UKRAINE COULD BE PUTIN’S VIETNAM 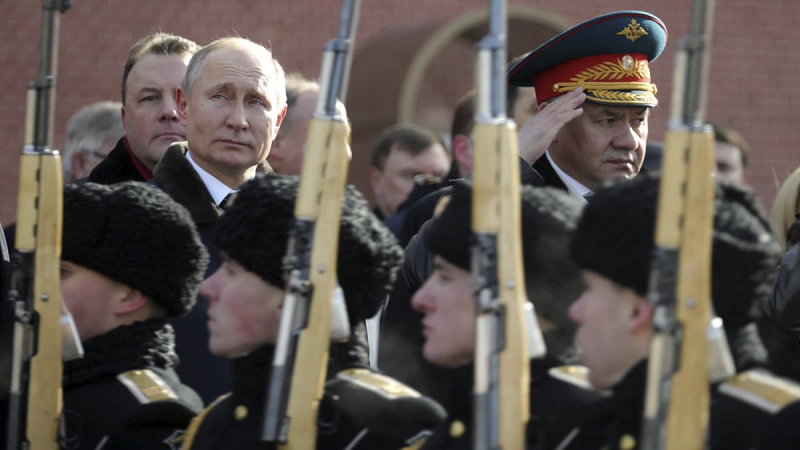 Even though Russian officialdom continues to insist Moscow has no plans to invade Ukraine, many Russian political commentators in recent weeks have been increasingly aggressive in suggesting that their country can easily defeat and occupy its largest western neighbor and that there is nothing the Ukrainians or the West can do about it.

But a contrary media narrative has unexpectedly sprouted up as well: namely, two Russian military experts and an Academy of Sciences specialist on security issues involving Ukraine have cast doubt over the persistent argument that Russia would face an easy time defeating Ukrainian forces in the field or pacifying the country after doing so.

And while none of these cautionary voices argues that the Russian military would not win the first round of fighting, all three see an outcome with potentially fatal consequences for the Russian Federation over the longer term.

The first of these dissents from the seemingly dominant line in Moscow comes from Mikhail Khodarenok, a retired colonel who earlier served as a senior officer in the Main Operations Directorate of the Russian General Staff.

Certainly no pacifist or opponent of the use of Russian forces to promote the country’s national interests, Khodarenok nonetheless insists that Moscow must face reality rather than live in a fantasy world of its own creation.

That is especially true when it comes to a possible armed advance into Ukraine, he writes in Novoye Voyennoye Obozreniye (Novoye Voyennoye Obozreniye, February 3). The New Times reposted this article, arguing that Khodarenok’s assessment represents “a rare case when the reader can become acquainted with the view of a Russian military man on a possible Russian war with Ukraine” (The New Times, February 6).

The retired General Staff colonel savages those who say Russia can defeat Ukraine in a matter of hours, who argue that Ukrainians will not fight, who insist that Russian forces will be greeted as liberators by Ukrainians, and who believe that the West will not do anything effective to help Kyiv or harm Russia.

None of those claims withstand close examination, Khodarenok asserts.

First of all, the former General Staff senior officer writes, Ukrainians will fight. They did so in 2014, forcing Moscow to drop its plans for carving “Novorossiya” out of southeastern Ukrainian territory.

Second, Ukrainians are even more hostile to Russia today than they were seven years ago; and their army is better trained and equipped.

Third, Russian firepower, while overwhelming, will not be able to destroy all of the Ukrainian forces or prevent the emergence of a serious partisan resistance movement in Ukrainian cities if Moscow occupies large swaths of the country.

Fourth, Russia’s control of the skies does not guarantee victory—as Russians should remember from Afghanistan and the first Chechen war.

And fifth, not only have Russian threats united the West in ways Moscow did not expect, but they have cajoled the transatlantic alliance into action to more strongly support Ukraine, which will certainly help Kyiv and hurt Russian forces even if they cannot prevent an initial Russian victory.

Moreover, any such victory may prove Pyrrhic if, as seems likely, the West subsequently imposes crushing sanctions on Moscow in retribution for the latter’s escalated aggression against Ukraine (Novoye Voyennoye Obozreniye, February 3).

The second broadside against the possibility that Russia will expand its invasion of Ukraine comes from retired Colonel General Leonid Ivashov, who penned a message to the Russian people as the head of the All-Russian Officers Assembly.

This veterans group has heretofore consistently backed strengthening the Russian military and using it to project power and has criticized Russian governments in the past for failing to do so. In his message, Ivashov nevertheless makes clear he does not believe his country can win a real victory in Ukraine.

Even if it secures a military triumph in the first round, Russia will have embarked on a road to disaster because of the resulting international isolation and severe sanctions. Indeed, the retired general says, in language he earlier used against former Kremlin leaders Mikhail Gorbachev and Boris Yeltsin, such adventurism will lead to “the final destruction of Russian statehood and the annihilation of the indigenous population of the country” (Ooc.su, January 31).

In reporting on the words of Khodarenok and Ivashov, Rosbalt commentator Ivan Preobrazhensky writes that it is obvious “the Crimean consensus,” which had brought most Russian analysts like Khodarenok and national patriots like Ivashov around to support President Vladimir Putin on almost all questions, no longer exists.

Up to now, the Kremlin has not responded to either of them. The top political leadership certainly understands that the views of these two experts are shared by others in the military, but, the Rosbalt writer contends, it is unclear what the Kremlin will do next.

“The less adequate” the official response proves to be, Preobrazhensky continues, “the greater the likelihood that this problem is serious and that the authorities simply do not know how to eliminate it except by using force. After all, that is how the Kremlin has been addressing most of its problems, both foreign and domestic, for the last decade” (Rosbalt, February 7).

Finally, the third (and earliest) warning to the Kremlin is one that comes not from a military specialist but from an Academy of Sciences analyst on Ukraine. But if anything, the judgment of Viktor Mironenko, who heads the Center for Ukrainian Research at the Institute of Europe of the Russian Academy of Sciences, is even more damning with regard to any further Russian aggression against Ukraine.

He argues that anyone thinking about invading Ukraine now should remember that it took the Red Army, at the height of its powers at the end of World War II, “almost a decade” to pacify Western Ukraine and that invading it now could lead to “a Russian Vietnam or a new Afghanistan” (Rosbalt, December 1, 2021).

These three critiques by themselves, of course, are unlikely to sway Putin if he is already committed to a re-invasion. But they highlight two factor to keep in mind:

First, the Russian military establishment is not as arrayed in lockstep behind him as many in Moscow and the West seem to think; and second, those in Moscow now warning against such a move, along with those who listen to them, are unlikely to forget if he does, in fact, move.