2 The Point News » Behind The Lines » Free Articles » FAKE NEWS! TODAY IS NOT PRESIDENTS DAY! 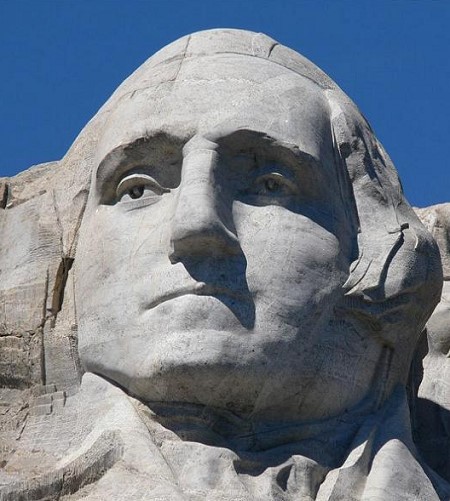 [ssba]This Thursday, February 22, is the 286th anniversary of the birth of America’s founder, the equal in nobility, heroism, and virtue of any human being who ever lived — George Washington.

What it is not, nor is any day such as today, Monday February 19, the phony holiday called “Presidents Day.”

Let’s be quite clear on this.  There is no such holiday.  It exists only in the minds of furniture dealers, car salesmen, and those promulgating or deluded by Fake News.

It wasn’t until 1870 that there were any national holidays at all, recognized by the federal government and granting federal workers a day off, although four were recognized by most states:  the Fourth of July, Thanksgiving, Christmas, and New Years.  In 1870, Congress declared them national.

In 1879, Congress added Washington’s Birthday to the national list, which had been unofficially celebrated by most Americans for many decades.

In 1894, Congress designated the first Monday in September as Labor Day for workers and unions – the first three-day weekend.

Memorial Day (originally called Decoration Day after the custom of decorating Civil War soldiers’ graves with flowers), was traditionally celebrated on May 30, but had no formal designation until 1968 with a law called the Uniform Monday Holiday Act.

It was the Democrat Congress and President Lyndon Johnson who damaged the memory of George Washington with this act of anti-patriotism.  Here it is: 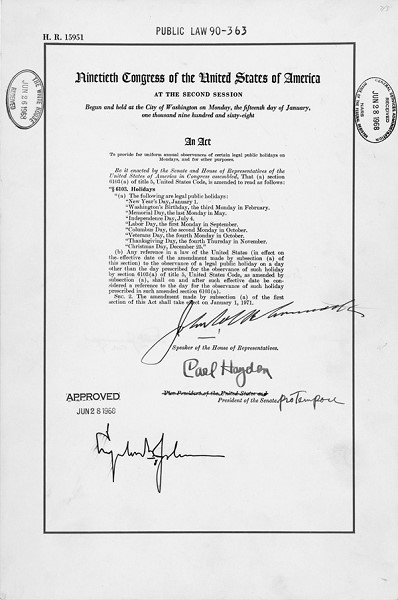 You can see the American character weakening before your eyes.  People were genuinely becoming less patriotic.  They didn’t want to spend their time celebrating something like those who died to give us freedom, they wanted a day off to party or goof off, and on the company’s or government’s dime.  They wanted more three-day weekends.

Patriots balked at any change to July 4th and Thanksgiving, Christians to Christmas, and everyone agreed that New Years was January 1st.  Labor Day was already a Monday, so Memorial Day and Veterans Day were changed too, Columbus Day was thrown in for a fourth, and then came the real anti-patriotism:  perverting Washington’s Birthday from February 22 to just another Monday.

“If we do this, 10 years from now our schoolchildren will not know or care when George Washington was born. They will know that in the middle of February they will have a 3-day weekend for some reason. This will come.”

The left’s assault on Washington’s memory began quickly.  Noting that Lincoln’s birthday was February 12, and that “third Monday” of Washington’s came soon after (it always comes before the 22nd, between the 15th and 21st), the libs began merging the two together, Washington-Lincoln, and then after a while, the lib Fake News media began calling it “Presidents Day.”

The left’s duplicity is two-fold.

First is to erase the memory of George Washington from schoolchildren and people in general, just as Kuykendall predicted.

Second is the Marxist goal of collapsing individuals into a collective, with no one better than any other.  There is no difference, in character or virtue or accomplishment, between Ronald Reagan and Barack Obama, George Washington and John Tyler.  They’re all the same, celebrated collectively as “Presidents.”

But there is no Presidents Day.  The Uniform Monday Holiday Act of 1968 specifies a “Washington’s Birthday” – and this is still the law of the land.  The Act has never been amended to rename it.

The Act has, however, been otherwise amended by Congress.  In 1975, it changed the date of Veterans’ Day back to November 11.

Obviously, Congress should amend it once more by changing the date of Washington’s Birthday back to where it belongs, February 22.

As things stand, there is only one single American in our entire history whose birthday is celebrated individually:  Martin Luther King, Jr.  Albeit that it’s yet another Monday (the 3rd in January, near his birthday of the 15th). No one should begrudge this.

Yet it is ludicrous that America’s founder, the Father of America, the greatest American of all by far, is not as well, being instead submerged into some leftie collective.

It is time for America to celebrate George Washington anew – and on February 22.  I’d like to ask you to take the time this Thursday to read this marvelous essay by historian Myron Magnet, When George Washington Became Great.

This is an ode to his incredible heroism and generalship.  One could argue that he truly became great, however, not because of his military accomplishments that achieved America’s independence, but when he could have become King of America and refused.

Washington was worshipped.  The throne and crown were his for the asking.  He said no.  He was freely elected our first president, was re-elected, and could have been president-for-life.  He said no.

There is no greater blessing that Providence bestowed upon America than this man.  Let us celebrate him on February 22 — and let’s do so from now on in his name on this day.

Happy Washington’s Birthday to you all.