Fading Joe Biden had a terrible Monday (10/12), a truly terrible day that goes a long way towards explaining why the national media and his campaign are working so hard to keep him hidden.  Here’s the rundown.

At a campaign stop in Toldeo, Ohio, he actually forgot he was running for president, saying what you just saw:  “I’m running as a proud Democrat for the Senate.”

When Biden was confronted with a poll that said 56 percent of registered voters believe they are better off than they were four years ago (when he was vice president), Biden said they shouldn’t vote for him.

Biden’s hilariously grumpy and obtuse response was that 56 percent of voters should not vote for him.

“Well, if they think that, they probably shouldn’t,” Slow Joe said. He added, “Well, their memory is not very good, quite frankly. ”

Biden is deteriorating and fading before our eyes, and now, rather than make the case for why people should vote for him, he’s just telling 56 percent of voters to go ahead and vote for Trump. You see, making a case for people to vote for him would require effort and mental acuity. It’s much easier to tell people to go away.

Regardless, do the math: if 56 percent of registered voters vote for Trump, Biden will only receive 44 percent of the vote. Has anyone explained that to Joe between Matlock episodes?

That wasn’t the worst part of Biden’s very bad Monday.

On Monday, Biden forgot Mitt Romney’s name, the guy who challenged Biden and Barack Obama in 2012. 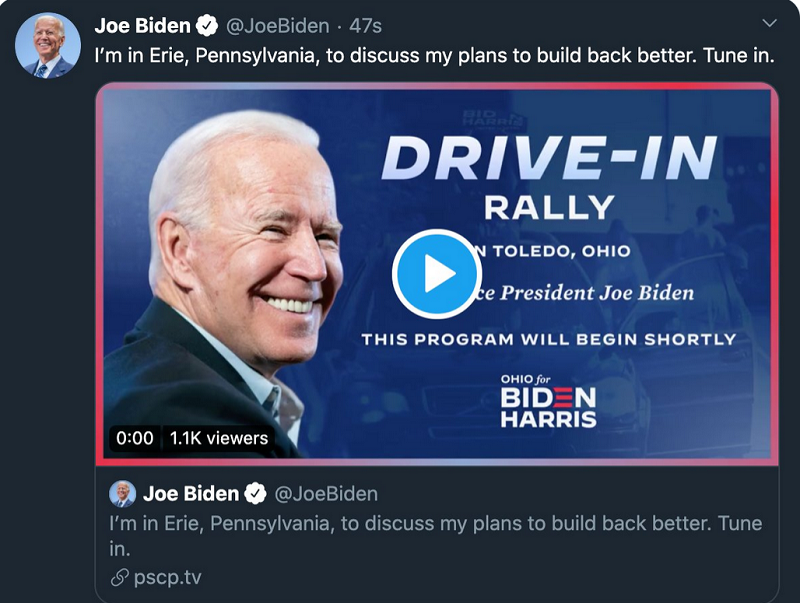 “Biden’s Twitter account is confused about where he is. 🙃 He was in Erie, Pennsylvania on the weekend. Today he has two stops in Ohio, one in Toledo and another in Cincinnati. pic.twitter.com/UWxviWNJSQ

On Monday, Biden also sent everyone to a website that exists only in the clown car of his foggy mind:

“After saying he’s running for Senate, a confused Joe Biden tells voters to go to IWill.com/Ohio, which is not a real website. pic.twitter.com/wYnlQ3AE9E

The good news for Joe is that no one shows up to his rallies to hear the gibberish his addled mind tells him to spew.

Trump, who is having the time of his life out on the campaign trail, mocked Biden’s very bad day.

Joe is fading away more and more every day…

John Nolte is a Hollywood screenwriter and Breitbart editor-at-large.