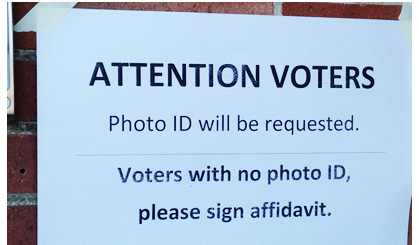 Enough is enough. Election after election, boxes of Democrat ballots show up in counties run by Democrat election supervisors to benefit Democrat candidates who, once they steal their opponent’s election night victory, will join the chorus warning of Russian interference in our elections.

Last time I checked, there were no Russian election officials in Palm Beach or Broward counties in Florida.

Democrats have long pushed for voting ease at the expense of voting integrity, pushing measures from voting by mail, to Motor Voter laws, to same-day registration while opposing voter ID laws which requires people to show up on election day with proof they are who they say they are.

They claim Voter ID laws are designed to disenfranchise voters. So does the sudden appearance of mystery ballots days, even weeks, after elections without a documented chain of custody or certainty that other ballots weren’t destroyed or that the ballots found were cast by real, live American citizens.

One is reminded of the classic case of an arguably close stolen election, the 1960 presidential contest between John F. Kennedy and Richard Nixon and the vote early, vote often city of Chicago where voting was such a passion that death was no impediment to that civic duty:

“At some point on election night Robert Kennedy, the candidate’s brother and campaign manager, was counting electoral votes. Information was coming in quickly through the television networks but there was not much information on Illinois, a very large state.

Most of Illinois was rural and traditionally Republican and the state’s largest city, Chicago (then the second largest city in the country), was and remains heavily Democrat. The mayor of Chicago at the time was Richard J Daley, reputedly a powerful political boss. There was no information at all from Chicago and its suburbs at this point and it was coming in scattered from the prairie regions. Robert Kennedy wanted to know how many votes Mayor Daley and his people had counted in Chicago.

Daley was harried, dealing with precincts all over the city, trying to compile and report them at an alarming rate. His answer to Robert Kennedy’s question on vote totals was reputedly, ‘How many votes do you need?’ The campaign manager told the Mayor he’d get back to him and Mayor Daley called with a vote total about an hour later, shortly before Illinois’ heavily Democrat total was reported on the three major television networks.”

As election night victories slip away from GOP candidates like Martha McSally in Arizona, and possibly Brian Kemp in Georgia, and Rick Scott and Ron DeSantis in Florida, one can almost hear Democrat operatives and election officials asking the same question — how many votes does the Democrat candidate need?

As in the race that put Al Franken in the Senate, recounts and lawsuits will inevitably continue until the Democrat takes the lead and then the counting will stop with nary a protest from the legacy media or the Russians.

Take the little-noticed flip of a Republican congressional seat in New Mexico after a supposed election night victory was announced by local and national media for the GOP contender. This was the announcement by ABC:

Not so fast. Before the echoes of that announcement had faded, missing ballots suddenly were repeatedly found, just enough to flip the results to the Democrat. Amazingly, missing ballots are seemingly never found that give the lead to or increase it for the Republican.

Herrell is not conceding the race:

“In an interview on Fox News, Herrell told Judge Jeanine Pirro that after multiple media outlets called the race for her on Election Night, the secretary of state’s office called her and said, ‘they had magically found 4,000 ballots that had not been counted.’ Herrell said, about an hour later the secretary state’s office called again and said they found another 4,000 ballots.”

That second batch of 4,000 was enough to flip the election to the Democrat. As Mayor Daley would say, his voice rising from a cemetery precinct, just tell me how many votes do you need?

Things like motor voter and early voting are a plague on our electoral integrity that even the Russians couldn’t dream up.

Early voting is an excuse for laziness that doesn’t allow a voter to change his mind. Early voters can move to another jurisdiction or even be dead on election day.

Motor voter is problematic in states that hand licenses out to illegal aliens who then can drive to the polls and vote, disenfranchising American citizens.

Provisional ballots make no sense. If you can’t properly register by election day, don’t bother to show up. It is not that hard. Put down your cell phone, register, and wait for the next election.

Mail-in ballots are invitations to fraud, plagued with signatures that don’t match and ballots denied depending on the election judge’s finite wisdom or political prejudice.

Just what is so hard about requiring a voter to physically show up on election day with an ID that proves they are alive, an American citizen, and who they say they are?

Photo IDs are required to board an airplane, an Amtrak train, open a bank account, buy liquor, cash checks, enter a federal building, and for a multitude of daily activities.

Consider this bit of irony: when Eric Holder went to Texas to denounce the voter ID laws of that and other states, each person entering the LBJ Library where he spoke was required to present his photo IDs in order to be allowed in to hear the speech.

The empirical evidence shows that voter ID laws do not suppress minority voting. In Georgia, black voter turnout for the 2006 midterm elections was 42.9 percent. After Georgia passed its photo ID, black turnout in the 2010 midterm rose to 50.4 percent. Black voter turnout also rose in Indiana and Mississippi after they enacted their voter ID laws.

As Investors Business Daily noted in 2014, dead voters casting votes, illegal aliens voting, and people being registered to vote in multiple states is a common and documented occurrence:

“The fact that many people will do anything to get out of jury duty has exposed massive fraudulent voting in Frederick County, Md., that may have been going on for years. Illegal aliens who stated they were noncitizens on jury duty forms were found to have cast votes in elections.

The Virginia Voters Alliance (VVA) cross-checked jury duty forms with individual voting records and found that hundreds of voters in that one Maryland county cast votes after reporting they were noncitizens. One in seven Maryland residents are noncitizens, so extrapolating the number of possibly illegal votes cast in recent elections over the entire state hints at possible election-changing fraud.

Maryland is one of many states that in the process of making it easier to vote has also made vote fraud easier to commit. Maryland both issues driver’s licenses to illegal aliens and has a Motor Voter law that allows that license to be used to register and vote.

The VVA filed suit Friday in U.S. District Court in Maryland asserting that individuals who opted out of jury duty as noncitizens have been able to cast votes in at least three Maryland elections.

Based on the number of these unqualified voters in Frederick County, it is estimated that up to 7% of Maryland’s registered voters could be illegal immigrants, enough to swing elections.”

Despite the fact that there is no evidence that requiring a voter ID suppresses voter turnout among minorities, it has been used by the feds from preventing states like the battleground state of North Carolina from working to tighten voting integrity. In another 2014 editorial, IBD noted the fraud that goes on that Democrats ignore:

“Last month the Rev. Al Sharpton was the keynote speaker at a rally to kick off the campaign for an Ohio Voters’ Bill of Rights state constitutional amendment opposing the use of voter ID.

During the rally, he hugged one Melowese Richardson, the Hamilton County, Ohio, poll worker who was convicted of casting five votes for President Obama, as the audience cheered.

Richardson’s actions were treated by the mainstream media and Democrats as a local aberration, not as evidence of widespread voter fraud and certainly not as justification for voting-integrity measures such as requiring a photo ID when registering and voting…

People move from state to state and voters die, but voting records are not often updated in a timely fashion to reflect those facts, leaving an abundance of seemingly valid voter registrations that can be used to skew the results of close elections. Only recently has cross-checking between states been done.

That cross-check found listings for 35,570 North Carolina voters whose first names, last names and dates of birth match those of voters who voted in other states.”

A paper in the scholarly journal “Electoral Studies” suggests that as many as 2.8 million illegal aliens voted  in the 2018 election:

“How many non-citizen votes were likely cast in 2008? Taking the most conservative estimate (those who both said they voted and cast a veriﬁed vote) yields a conﬁdence interval based on sampling error between 0.2% and 2.8% for the portion of non-citizens participating in elections.

Taking the least conservative measure, at least one indicator showed that the respondent voted yields an estimate that between 7.9% and 14.7% percent of non-citizens voted in 2008.

Since the adult noncitizen population of the United States was roughly 19.4 million (CPS, 2011), the number of non-citizen voters (including both uncertainty based on normally distributed sampling error, and the various combinations of veriﬁed and reported voting) could range from just over 38,000 at the very minimum to nearly 2.8 million at the maximum.”

Election day voting with a photo voter ID – only and nothing but – eliminates mismatched signatures, misplaced, lost in the mail, or even manufactured ballots that show up only when needed to pull a Democrat to victory. State election boards must be allowed to purge voter rolls of dead people or voters that have moved, often winding up registered to vote in multiple jurisdictions.

These actions disenfranchise no one except the lazy and the stupid.

Daniel John Sobieski is a freelance writer whose pieces have appeared in Investor’s Business Daily, Human Events, Reason Magazine and the Chicago Sun-Times.