DON’T HATE ME FOR TELLING YOU THIS 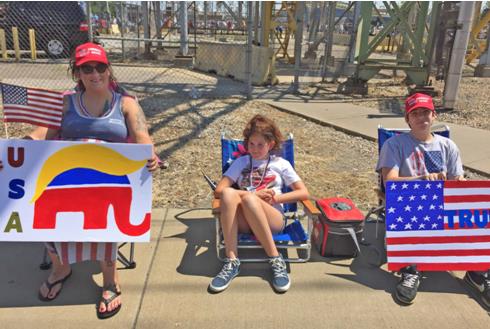 Sara Cox and her children wait at the gates of U.S. Steel in Granite City to welcome President Trump.

[Neil Steinberg is a dyed-in-the-wool Democrat – and as such feels right at home reporting for the liberal Chicago Sun-Times. Last Thursday (7/26), he was in Granite City, Illinois to watch President Trump speak to the steelworkers at the recently reopened U.S. Steel plant. While he can’t help imparting his anti-Trump bias, he has the honesty to tell his Sun-Times readers – who are as anti-Trump as he is – what he learned. Full video of the President’s speech below –JW]

Donald Trump is a charming man, and people like him.

Up in Chicago we forget that. Between the attacks on immigrants, on Democrats, on the press, and the FBI, and the Justice department … well, the list goes on and on, doesn’t it? We see the damage, to our institutions, to our social fabric, our nation’s reputation, to groups and individuals, and assume he’s a reviled figure, ripe to be driven from office.

Not true. Not down here, at U.S. Steel’s sprawling works, Trump embraces and is in turn embraced.

“The moment of a lifetime,” said millwright Earl Evans, one of about 400 workers who came in on their own time to hear the President speak. “Finally someone doing something for America.”

I drove Downstate to listen to Illinois farmers talk about how retaliation against Trump’s tariffs on steel and aluminum are hurting them. But while I was at it, it seemed worthwhile to take in Trump’s speech.

Waiting several hours for Trump’s arrival, I spoke with steel workers, in their hard hats and bright orange high-res gear. They were deeply grateful to have their jobs back and the President visit.

It’s impossible not hear the tales of hardship, of layoff and a fading mill, and not to share their happiness. Anyone who ever mourned the death of American manufacturing has to. These shuttered factories never come back, but this one has. The cost of these jobs is being borne elsewhere, on mortgaged farms and burdened consumers. But here the news is good.

Trump isn’t the speechmaker Barack Obama is, no memorable phrases or poetic lines. But he knows how to relate to an audience, to feed their sense of being menaced by outsiders, of being betrayed by a government too stupid to live in the real world, like they do.

Fifty-three minutes of praise, exaggeration and braggadocio, sprinkled with half-truths, non-truths and the occasional fact tucked in for variety’s sake.

Except of course the re-opening of Blast Furnace B — in September, once they make updates and repairs. That’s the only truth that matters here. A 3,000-degree behemoth that’ll take months to bring on line.

“No one’s ever started a plant that’s been down that long,” said Bert Elliott, a BOF operator for 28 years (the mill has blast furnaces, that make iron, then what are BOF, or Basic Oxygen furnace vessels, that turn the iron into steel). “It’s a huge effort, very complicated to get going.”

Trump is the first President Elliott has seen and he was in awe.

“He’s the most powerful man in the world,” he said. “I think he runs the United States like a business.”

Like most businesses, Trump prefers his own PR to any impartial critique. Several times he gestured to the press at the back of the enormous warehouse. “They analyze my every word,” he said, as if it were a bad thing, and I suppose to a man who accepts only praise, it is.

In the past, in Trump’s view, the United States was a naïf being swindled by “the worst trade deals every made in history.” Until he came along. Now “we have the best economy we ever had in the history of our country.”

That isn’t true. But it sounds good.

He touched on a variety of topics — Russia, briefly, North Korea more in depth, claiming Obama didn’t know how to handle the dictatorship.

“He was ready to go to war,” Trump said. “Now I have a great relationship with Chairman Kim.”

You could feel Trump’s neediness.

“How am I doing?” he asked, and the crowd roared.

“Look at the cameras! It’s like the Academy Awards.”

He’d say something I agree with — Yes, we do have “horrible, horrible immigration laws” — then follow up as if every immigrant was a gang member.

Before going, I felt squeamish at being in the crowd scene at a party for the man who kicked open the Pandora’s box of American fears.

Almost afraid. But hearing him, I better understood his appeal. He has a vulnerable charm, at times a humanity.  He pandered shamelessly to his audience.

That struck me as either sincere or an amazing facsimile. The workers, for their part, couldn’t give him a standing ovation because they never sat down.

I left the hall thinking: Donald Trump is going to be re-elected in 2020. The Democrats don’t have anyone who can touch him. Bank on it. Don’t hate me for being the one to tell you.

Full video of President Trump’s address to the steelworkers at U.S. Steel in Granite City, Illinois, July 26, 2018. It is worth watching entire to see why it had the impact on Mr. Steinberg it did.