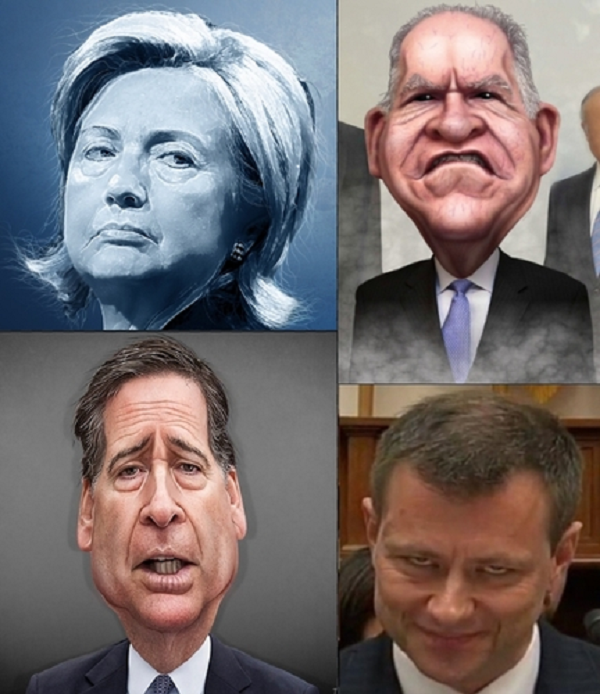 If I were a betting woman, I’d say that, over the next month, we’re going to see a steady drip, followed by an onrushing stream, of information about the corrupt origins and practices behind the Russia hoax.

To start: the big news is that yesterday (9/29), Lindsey Graham released a letter from John Ratcliffe, the Director of National Intelligence (full letter in link). In it, Ratcliffe wrote that Hillary Clinton and Barack Obama were both involved in originating the Russia hoax and that former CIA director John Brennan pushed the investigation.

*In July 2016, American intelligence learned that Russia claimed to have learned that the Hillary Clinton campaign planned to undermine Trump. According to Russia, the Clinton group was going to say that Trump had ties both to Putin and to the alleged Russian hacking of the Democrat National Committee email account. (There’s still no proof, beyond Clinton camp claims, that Russia was behind the hacking.)

*Armed with this information, former CIA Director John Brennan went to the White House to brief President Obama and senior national security officials. According to Brennan’s handwritten notes, this briefing included telling them about the “alleged approval by Hillary Clinton on July 26, 2016 of a proposal from one of her former policy advisors to vilify Donald Trump by stirring up a scandal claiming interference by Russian security services.”

After these revelations, on Sept. 7, 2016, national security officials sent a referral to Trump-haters Comey and Strzok regarding “U.S. Presidential candidate Hillary Clinton’s approval of a plan concerning U.S. Presidential candidate Donald Trump and Russian hackers hampering U.S. elections as a means of distracting the public from her use of a private mail service.”

I understand the quoted language above to mean that national security officials were telling Comey and Strzok to investigate Hillary Clinton’s campaign. As in, please find out whether Clinton actually approved a plan to accuse Trump of colluding with the Russians as a way to distract from her crimes.

But that’s not how the Comey FBI interpreted it. Instead, with substantial assists from the Obama White House and CIA, Comey’s FBI and Loretta Lynch’s DOJ launched a full investigation into Donald Trump, the victim of Hillary’s corrupt plan.

Let me sum up what happened: US Intelligence Agencies (Ratcliffe does not specify which) learned through intercepts that Russia believed Hillary planned to raise false claims against Trump, accusing him of dirty dealings with the Russians. Brennan took this information to Obama and other national security people. A month later, a letter went to the FBI telling them that they needed to look into Hillary’s alleged dirty dealings.

So what did Comey and Strzok do? They went after Trump. No one at the FBI looked into whether Hillary was the victim of Russian disinformation, whether she was actively colluding with Russia, or whether she and her campaign were just evil and dishonest liars.

Once Comey and Strzok started their investigation, Obama and Brennan went along with it, supporting it before, during, and after the election. Moreover, the FBI and the Eric Holder-Loretta Lynch holdovers in the DOJ have both been working overtime to whitewash what happened. The whole thing is dirty and threatens the foundations of our country.

And here’s why I think we’re going to see more revelations now.

The Trump Department of Justice has known about this for a long time but hasn’t brought indictments because the administration is playing a long game. The D.C. federal judicial system is controlled by the Democrats, from the courtroom to the jurors. Even if the DOJ had indicted anybody, it was reasonable to believe that they’d walk, which would be a loss for the Trump administration.

This is why Trump and Mitch McConnell have been working to change the federal judiciary from district courts up to the Supreme Court. The only way to get a fair trial is with judges who believe in the Constitution and the laws flowing from it. One of the things a fair judicial system will do is allow the administration to remove the trials from D.C. to a more neutral location.

Until then, Trump is using the month before the election, a time when people are finally paying attention, to put the facts before the American public. We’ve finally entered the final phases of the power struggle in D.C., and Trump is playing to win.

(Reminder: Lindsey Graham is working on the side of the angels on this one. Democrats from all over America are pouring money into his undistinguished, hard-left opponent’s account. Please give Graham a hand.)