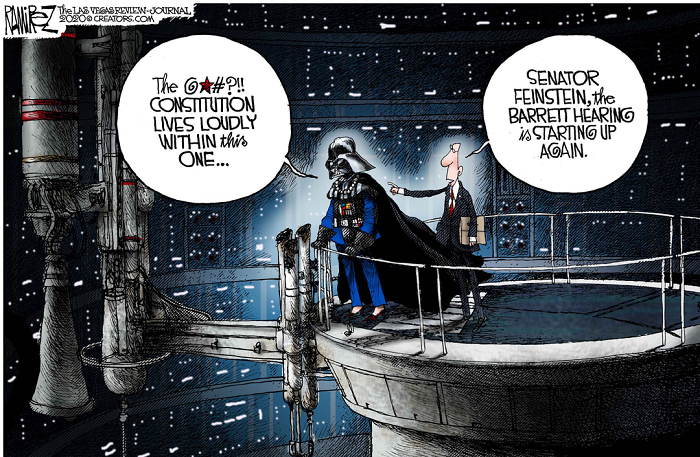 They came, they questioned and they got nothing. It’s almost enough to make you feel sorry for Democrats. Almost.

With a history of vicious misbehavior and the political calendar limiting their ability to smear Amy Coney Barrett, Dems on the Senate Judiciary Committee were reduced to being annoying nags and finger-wagging scolds. They were never going to vote for any Supreme Court nominee of President Trump’s to replace the late Ruth Bader Ginsburg, but they don’t even have the option of giving Barrett the Brett Kavanaugh 2.0 treatment.

Another character-assassination attempt of the kind visited on Kavanaugh two years ago — now Justice Kavanaugh — would have been risky business so close to the election, so it was politics, not decency, that stayed their bloody hands.

Make no mistake, though, if they could have, the Dems would have trashed Barrett as too religious and too conservative and done everything they could short of setting the building on fire to stop her from joining the high court before the election.

As it was, they spent their time during the first day of questioning largely trying to trip her up and get her to make statements they could use as campaign fodder against Trump and the GOP. Their fallback position was to lay the groundwork for getting Barrett to recuse herself in important upcoming cases, especially the challenge to ObamaCare the court is scheduled to hear beginning Nov. 10.

They also fumed and sputtered about the possibility that the court might be called on to make key ballot rulings after the election and hoped she would not participate. No luck. They all struck out.

Their basic problem is that Barrett came across as an appealing Superwoman. Flanked by her husband, six of their seven children and her six siblings, she was flawless in answering those questions she could and in politely sidestepping the traps.

Speaking without a single note or any reference books, she exhibited a laser-like memory of things she wrote and said as a professor at Notre Dame law school and, for the last three years, as a judge on a federal Court of Appeals.

At one point, Sen. Dianne Feinstein, who infamously said to Barrett three years ago that the “dogma lives loudly in you,” grew frustrated at getting nowhere and switched topics by saying, “OK, let me try something else.”

While Barrett was generally engaging and pleasant, she was almost robotic in responding to even clever attempts to get her to hint how she might rule on specific cases or issues. Repeating a famous line that Ginsburg used at her confirmation in 1993, Barrett repeated: “No hints, no previews, no forecasts.”

The lack of theatrical accusations didn’t make for great television, but the hearing was educational as only Supreme Court confirmation hearings can be. Repeated references to the Constitution, discussion of legal landmarks and constant reminders that the court and the entire judiciary were designed to be different from the executive and legislative branches amount to a teaching moment for anyone who cares to learn.

That is especially valuable since high schools and colleges apparently no longer teach civics or a positive view of what made America unique in the history of mankind.

In that context, the separation-of-powers discussion is crucial because it is one of the defining differences of the two main political parties. Dems have used the courts as super legislature to win rulings on measures they can’t get through Congress and statehouses. Republicans generally want judges to stay in their lane and not be activists who stick their fingers in the air to see which way the political winds are blowing.

The best illustration was the way Dems badgered Barrett to preserve ObamaCare. Showing blown-up pictures of people in their states with health-care issues and reading personal stories often made the confirmation hearing seem like a bill mark-up session.

et the most refreshing part of the day was to better understand who Amy Coney Barrett is and why so many of her students and professional colleagues rave about her intellect and her kindness and why Trump picked her. One insight came when Sen. Dick Durbin of Illinois asked whether she had watched the George Floyd video.

She said she had, with some of her children, including daughter Vivian, one of the two black Haitians she and her husband adopted. “We wept together,” Barrett said, adding that racism is “abhorrent.”

Later, she responded to a question about same-sex marriage by saying she rejected discrimination of any kind.

Her performance vindicated a comment made Monday by the woman who introduced her. ­Patricia O’Hara, a former colleague and dean at Notre Dame law school, described Barrett as a woman “who leads an integrated life of mind, heart and soul.”

Yet politics has become such vicious blood sport that Barrett said her family had discussed whether she should accept Trump’s nomination.

Asked why she decided to accept and go through what she called the “excruciating process,” she answered:

“I should serve my country. And my family’s all in on that because they share my belief in the rule of law.”

We live in a time of upheaval, but America is beyond lucky that such extraordinary people still answer the call to public service.