DEMS BEING SCHOOLED ON DACA IN THE ART OF THE DEAL 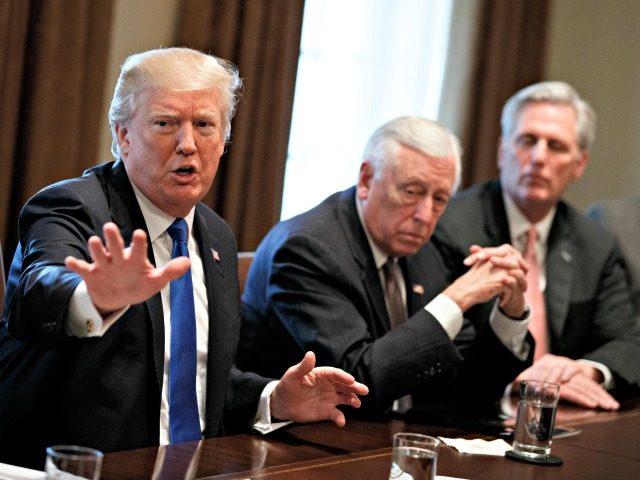 If you watched the opening of DACA negotiations Tuesday (1/09), you saw a master negotiator play a strong hand flawlessly.

Playing the role of an even-handed moderator earnestly seeking a deal, the president dominated the room. Breitbart was impressed. So were normally very critical MSM journalists.

Not bad for a senile moron who spends 17 hours a day watching the Gorilla Channel. Just by permitting the session to be covered by the news media, Trump slew the leftist narratives arising from Michael Wolff’s hilarious book and Yale Psychiatry Prof. Bandy Lee’s preposterous long distance diagnosis.

“Brilliant move by POTUS,” said Martha McCallum of Fox News. “In the middle of the Wolf onslaught he allows live coverage of him working the table with Dems/GOP on immigration. Thoughtful, policy proficient, and determined to get a deal.”

The president has framed the debate so that if there is a deal, he wins. If there isn’t, Democrats lose.

He wants to sign a bill that grants legal status to otherwise law-abiding Dreamers, Trump said. But such a bill must put an end to chain migration and the visa diversity lottery, provide at least a start to a border wall.

You can read here why chain migration – in which immigrants granted legal status then bring over their relatives – is so bad. And you can read here how the visa lottery has been a pipeline for terrorists. The House Chairmen’s Bill posted on TTP today (1/11) will be the framework for a DACA deal.

We must put an end to both chain migration and the visa lottery. But probably the only way this Congress would do that is in the context of a DACA deal.

Fortunately, Democrats have invested so much political capital in the Dreamers they’re all but certain to acquiesce in these provisions to get a deal.

The border wall will be a harder sell. Trump may get (at least a part of) that too. If there is to be give and take in this negotiation, as there is in every negotiation, many think here is where the give will be.  Not, however, according to VPOTUS, nor POTUS himself:

To get repeal of chain migration and the visa lottery, President Trump will have to give – essentially nothing.

President Obama’s executive order of dubious constitutionality gave the roughly 670,000 “Dreamers” still in this country (tenuous) legal status. This is down from 790,000 in September, 1.1 million when Obama issued his EO.

If Congress grants legal status to (otherwise law abiding) Dreamers, essentially all that changes is a formality. The same number of Dreamers would still be here.

Passage of a DACA bill would prevent the president from deporting Dreamers, which he can’t do now anyway while the Obama EO is in legal limbo.

This memo by Jennifer Palmieri makes plain Democrats are interested in illegal immigrants primarily to get votes. But immigrants come here for reasons other than to vote for Democrats. President Trump and the GOP can use this dichotomy to their advantage.

The most important thing to keep in mind about a DACA deal is that granting legal status to Dreamers is not granting them citizenship. A DACA deal would remove the threat of deportation (which is what illegal immigrants care about most), but wouldn’t give them the right to vote.

Illegal votes cast by non-citizens are a serious problem. His assignment of the task to deal with this to the Department of Homeland Security indicates President Trump is well aware of this.

It would be better not to deal with this in a DACA bill. But if Democrats insist a “path to citizenship” be spelled out, it could be spelled out that legal status will be revoked if a Dreamer commits a felony, or votes illegally in a federal election. Such offenders would go to the top of the list for deportation.

We’ve little to fear from a “path to citizenship,” provided it takes some years to traverse, and there are milestones to meet along the way.

The fallacy in the Dems’ strategy of achieving political dominance through  immigration is the voting patterns of immigrants change over time.

Immigrants – legal and illegal – come here in search of a better life. The best way to wean them from Democrats is to increase economic opportunity, which the Trump economy is doing.

George W. Bush got 44 percent of the Hispanic vote in 2004, McCain and Romney about 30 percent. The GOP lost ground because of the elevation of the illegal immigration issue, and because so many Republicans sounded as if they were anti-Hispanic, not just anti-illegal immigration.

Democrats have opposed compromise because they’d rather have the issue than a solution. Passage of a DACA bill will lower the profile of the issue, give Trump  opportunities to demonstrate his “love” for law abiding Hispanics.

Not even Trump is likely to get 44 percent of the Hispanic vote. But if he gets just 35 percent in 2020 (I think it will be more), he wins an electoral landslide.

Democrats are between a rock and a hard place. If there is a DACA deal, Trump will get most of the credit, a major Dem issue will be defanged. If there isn’t, Democrats will appear impotent, their base will be really peeved at them.

During negotiations, Trump will keep the pressure on by making deportations like this one very public. With each passing day, the Democrats’ negotiating position will weaken.

And so it begins. Border security, chain migration, diversity lottery, voter ID, border patrol in exchange for DACA. Look for Dems to be schooled in the art of the deal. Nonstop drama until the midterms.