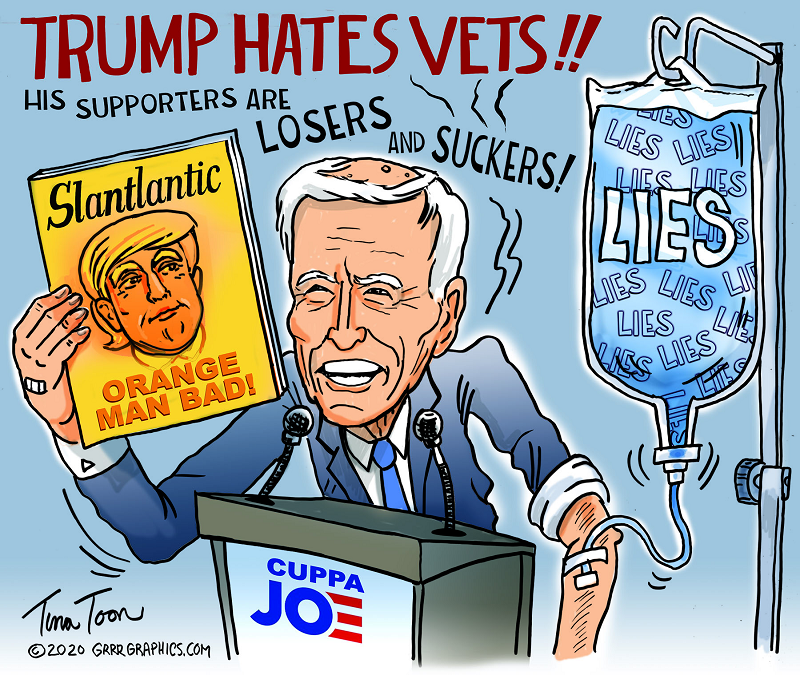 In terms of political ethics and tactics, the Democrats have hit rock bottom.

The Atlantic has worked hard to become a third-rate New Yorker in terms both of literary quality and the vitriol of its hatred for President Trump; the magazine has probably confirmed its position with the confection of the uncorroborated and totally implausible allegation that Trump disparaged American World War I veterans who died in France as “suckers” and “losers.”

It is impossible that any such statement was made by him. He is a proud graduate of the New York Military Academy, and has a decades-long record as an admirer and supporter of the U.S. Armed Forces.  This president, unlike some of his predecessors, believes ardently both in the necessity and the nobility of the U.S. military, and he has done a great deal to strengthen the troops and raise their pay.

It is indicative of the fact that the Democrats are much less overconfident than they were four years ago that they have unleashed their dirty tricks division a month earlier than they did in 2016 with the completely irrelevant Billy Bush “Access Hollywood” tape of locker room indiscretions by candidate Trump 11 years before.

While it was completely irrelevant to whether Trump was worthy of election in 2016, and was somewhat bizarre as it emanated from the campaign of the spouse of, along with John F. Kennedy, the greatest sexual predator in the history of the White House, it was at least an uncontested recording from many years before of Trump’s opinion of a celebrity’s opportunities for sexual self-assertion. He did say it.

In this latest incident, many people, including almost everyone who would have been present, have all denied that any such utterance had been made. It is inconceivable that this president would think or say anything of the kind.

But the odium of the incident is magnified by the fact that it was clearly staged in a tight sequence coordinated between the Biden campaign and its most rabid media partisans.

As soon as the Atlantic story appeared, an anti-Trump veterans’ organization called VoteVets produced a lengthy follow-up Internet statement that the president was not really any friend of the Armed Forces and veterans should take note of his outrageous comments in Paris and swarm the polls in favor of his opponent.

The inevitable “Morning Joe” Scarborough was already thoroughly up to speed early Friday after The Atlantic “revelation,” and fired a full anti-Trump broadside on his MSNBC program. Shortly after, with obvious careful prearrangement, Joe Biden sortied from his basement like a fretful World War II German battleship commander ever-fearful (for good reason) that enemy heavy units might be about.

In response to a planted question from an Atlantic reporter, and with the perfunctory condition of the remarks being true, Biden delivered a righteous denunciation of the president ending with: “Who does he think he is?” Then he scurried back indoors like the Bismarck, Scharnhorst, or Tirpitz returning at speed to their fjord.

It was perhaps the slimiest smear job in American presidential politics since the McCarthy era. At least the Russian collusion fraud was somewhat ingeniously constructed—requiring, as it did, the partial corruption of the intelligence agencies and the FBI to get it into the media as fruit of a spurious counterintelligence investigation and therefore the infamous Steele dossier pastiche of lies and deformations. That required no journalistic verification.

Evil as it was—as presumably even the lethargically paced Durham investigation will eventually allege—it was intricate, carefully planned by senior officials, and monstrously illegal. This latest allegation is inane and dishonest and no sane person could believe a word of it.

There has been some attempt to keep it afloat by tying it to disparaging remarks Trump has made about the late Senator John McCain. The bad blood between them goes back at least to 2000, when Trump was contemplating seeking the presidency as the candidate of the Progressive Party (the default name for third parties), which was then inhabited by the imperishable Ross Perot (third party candidate in 1992 and 1996), and the governor of Minnesota, wrestler Jesse “The Body” Ventura.

Trump won two primaries in 2000, but eventually recognized that third parties never win in the United States, since the rise of the Republican Party in 1856. Even Theodore Roosevelt, also running Progressive, was unable to defeat President Taft in 1912 and merely split the vote, electing the Democrat Woodrow Wilson.

But before departing the 2000 race, and after a certain amount of obloquy had been thrown around on all sides, Trump referred to the two main contenders of the established parties, Republicans George W. Bush, then governor of Texas, and Senator McCain, and Democrats Vice President Al Gore, and New Jersey Senator Bill Bradley, as “a bunch of stiffs.” This was fair comment for an election campaign (and wasn’t altogether inaccurate), but only McCain seems to have been especially annoyed by it.

To try to keep the vicious libel of the alleged Trump disparagement of war dead alive, rodentine Jack-in-the-box Pete Buttigieg, former mayor of South Bend, Indiana and a cameo figure in this year’s Democrat presidential nomination campaign, popped up.

With the motor-mouthed glibness that we still recall, he assimilated Trump’s claim that despite disagreements, he had considerable respect for John McCain, as self-evidently untruthful. Therefore, said Mayor Pete excitedly, his denial that he did not mock American war dead in Paris in 2018, though supported by everyone else who was present, was obviously a falsehood.

This is the Democratic canon: malicious lies supported by stupid lies and disseminated to the world by the morally bankrupt, reflexively partisan Trump-hating media. Biden and his party retained plausible deniability, but a slime operation as egregious as this, as early as this in the campaign, is no sign of confidence by the Democrats.

Conrad Black is one of Canada’s most prominent financiers, and the author of Donald Trump: A President Like No Other.