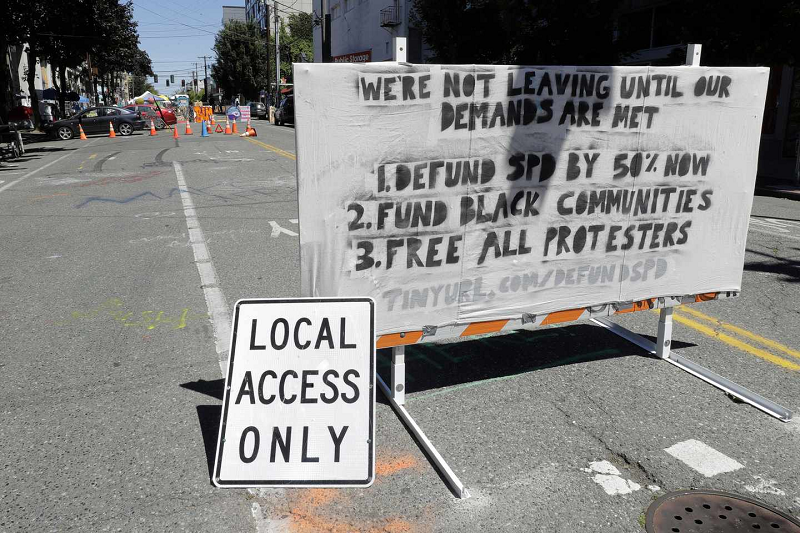 Due process is not the strong suit of mobs. Neither is nuance, open discussion, or disagreement.

These inherent defects should be painfully obvious as mobs pull down statues, seize sections of cities, and demand the public approach them on bended knee, literally. Anyone who dares push back, perhaps with a mild tweet saying “All lives matter,” faces immediate censure.

If the mob is successful, any offenders will lose their jobs. Feckless employers and companies are all too eager to appease the mob and hope it turns on another target.

In this perilous environment, the most frenzied voices do more than dominate the public square. They monopolize it by silencing dissent. They have received full-throated support from the tech giants that control electronic discussion and the media giants determined to shape the narrative rather than report the news.

Twitter and CNN are the poster children for this assault on free and open discussion. Their suppression in the name of “social justice” betrays the idea, best articulated in John Stuart Mill’s “On Liberty,” that competing, divergent views lead to greater understanding and better decisions.

The idea of an open forum, so basic to democracies, already lies a-moldering in the grave of academia, at least in the humanities and social sciences. Imagine applying for a job in Gender Studies and saying you oppose abortions after, say, Week 38. The term for such a person is “unemployed.”

Imagine merely calling for a discussion on the pros and cons of affirmative action, taking the negative side, and hoping to win tenure in political science, sociology, anthropology, or history. Bad career move. There is more robust political debate at the Academy Awards.

University administrations are equally rigid. Rejecting affirmative action, questioning the implementation of Title 9, or opposing Black Lives Matter would end your chances of being hired by the admissions office or dean of students at nearly every American university.

Yet all of them proudly tout, with no sense of irony, their “office of diversity and inclusion,” fully staffed and generously funded. For them, of course, diversity never includes diverse viewpoints. It’s all about DNA and gender identity.

The “thought police” are on patrol and ever-vigilant, twirling the twin batons of guilt and moral superiority.  They need to be defunded.

Dissent from their approved views is not just considered an error, much less an innocent one. It is considered immoral, illegitimate, and unworthy of a public hearing. Opponents are seen in religious terms, as dangerous apostates who deserve to be burned at the stake, at least symbolically.

You never expect the Spanish Inquisition. Yet here it is. That is the powerful iconography behind torching police cars and neighborhood stores.

Suppressing free speech is not the same as violence, but the two are invariably intertwined. The threat of violence not only underscores the intensity of particular views — it heightens the danger of voicing any disagreement.

Large-scale violence, whatever its source, whatever its purpose, undermines social stability and assails democratic procedures. It won’t stand for long because the public won’t tolerate it. They will demand leaders who restore order. The only question is what kind of order and at what cost.

The first duty of any government is to establish public order and safety, ideally with popular support. In constitutional democracies, we have well-defined procedures to establish that order, determine its content (such the speed limit or right to carry a weapon), proper ways to enforce it, and penalties for violating it.

In the United States, we have one additional constraint, a fundamentally important one: personal rights, such as freedom of speech and religion, cannot be overridden, even by large majorities.

This social and political order is not static — it is always evolving — but there are well-established procedures to make those changes, ensure all voices are heard, and protect each citizen’s inalienable rights. Even using the term “citizen” is contentious these days. The language police don’t like it because it excludes some people.

Calls to “Defund the police,” if they are serious, attack the very idea of establishing this peaceful public order. Cities foolish enough to attempt it will unleash violence, arson, and predation and meet a predictable backlash from citizens determined to protect their lives and property. They will either stand and fight or flee to safer spaces.

Although mobs are not always violent, rule by mobs is always a threat to constitutional democracy. Even peaceful protests can morph into mob rule when they stamp out dissenting voices or quash democratic procedures.

We are seeing a lot of that today, where peaceful protests, guaranteed under the First Amendment’s rights to free speech and assembly, attempt to suppress others’ speech, demand obedience from public officials, topple symbols they claim to hate, and smear anyone bold enough to disagree.

Corporations and universities have folded under these attacks as quickly as a cheap umbrella, or Seattle’s city council.

To preserve our democracy, we must resist the mob. That begins with understanding the gravity of the threat and standing up to it. They have no claim to moral superiority and no right to use violence to achieve their ends.

Yielding the public square to this “thought police,” however powerful and intimidating they are, is the road to tyranny. It leads away from our country’s hard-won achievement of ordered liberty and constitutional democracy.

Remember, the mob aims to do more than pull down statues of the Founding Fathers. It aims to pull down their historic achievements.

Charles Lipson is the Peter B. Ritzma Professor of Political Science Emeritus at the University of Chicago, where he founded the Program on International Politics, Economics, and Security.