DEFEATING THE LEFT THROUGH ENTROPY 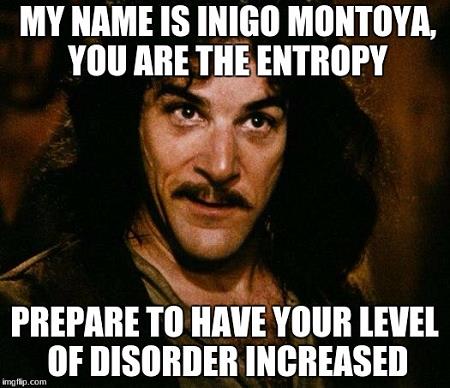 Regarding my TTP article last week (12/20), The Left Vs. Thermodynamics, Julius Wroblewski on the Forum reminded me that “Many of the 9/11 Islamo-kamikazes and Aum Shinriyo gassers were STEM boys, after all.”

STEM alone is not the central point. As Julius noted, a STEM education can be a fine thing but is not the solution by itself.

From my personal experience, there are problems with STEM programs as presently taught. I have been one of the State of Ohio finalist judges for the State Science Fair since 1991. I was a regional judge before that.

The science fair process starts in high school where a student is exposed to the Scientific Method and then tasked to produce a project demonstrating the method. Local physicians, instructors, scientists, etc. are invited to judge the projects for compliance with the method.

The success criteria are compliance with the Scientific Method, not novelty or “correctness of the result.”

The top tier moves on to the regional level at five universities in the five districts that make up the state. The same criteria apply only this time the judging is more formalized, and the expectation of project knowledge by the student is greater. The regional process is under the supervision of the hosting university’s science department.

The United States Military has a significant presence at this level with about one-third of the rewards, and perhaps a fourth of the judges are provided by the uniformed services. The military is looking for ROTC and service academy potential applicants.

This is also the tier where homeschooled students merge into the process alongside the institutionally educated students.

Public school students make up the final sixty-five percent and win the balance of about twenty percent of awards.

The next tier occurs at the state level, where I judge physical chemistry and chemical engineering and pass out substantial cash prizes donated by the American Chemical Society and the American Society for Chemical Engineering. The initial pool of about 70,000 students has now been reduced to about 2,000 of which a minority of projects are physical chemistry or chem-e related.

The competition occurs in the field house of the largest university in the state. The Ohio State University contributes the infrastructure, parking facilities, traffic police, etc. and puts on a show to try to recruit students in exchange for their facility expenditures.

Winners are invited to merge with the privately financed science fair programs such as the one sponsored by Intel Corporation and can introduce a student into the world of corporate scholarships and three-letter agency scholarships culminating in a competition at the National Academy of Sciences in Washington, DC.

The national events are kind of “spooky” with agency human resource departments present and attract Chinese observers (spies). One irritating notable is that students hailing from George Bush’s Houston or Robert Gates’ Pennsylvania, or any of thousands of towns in between were immediately disqualified for three-letter agencies scholarships in favor of the suburban kid from ritzy Connecticut or etherial Palo Alto during the John Brennan years.

Add zip code systemic bias to the anti-white male officially sanctioned bias on the list of things that fuel heartland anger towards the deep state. These are problems for another discussion.

These many years of judging reveal some trends.

First, the understanding of the Scientific Method has eroded in the public schools and the root cause appears to be the textbook selection and the refusal of science instructors in the unionized public schools to work extra (uncompensated) hours to champion projects.

The non-union private and religiously based school instructors appear to be much, much more generous with their after-hours. The home-schooled students live a life of total education immersion and can’t escape their parent’s enthusiasm no matter how much they might try.

Projects were once (correctly) designed to falsify a null hypothesis but increasingly are designed to “prove” the hypothesis correct and show signs of significant data fabrication to get the desired result.

This is a tragedy of errors and efforts are being made to improve the quality of projects and improve culling at the regional level. Two years ago, no project reaching the state level met the criteria and no awards were granted for physical chemistry. Not one of the homeschooled kids even brought home the bacon even though these students are often the exceptionally bright offspring of accomplished parents.

This raised many eyebrows.

The second trend is an erosion of an understanding of thermodynamics itself and specifically the concept of entropy.

Entropy represents the number of microstates possible within a given macrostate. Changes in entropy are measured using probability theory and math that reflects a non-linear change.

The daily variation in the stock market value can be thought of as a measure of entropy. It is one macro market existing with hundreds of billions of possible combinations of stock ownership and price movements representing microstate conditions.

The lefties, the fascists, the Islamic-terrorists, and their many offspring want to force a world where all members of all microstate conditions line up and face the same direction. They call for efficiency, focus, coherence, intersectionality, and other such rubbish as they try to deny the reality that the number of micro conditions is only controllable in the short term.

To be a leftist, fascist, communist, Islamic terrorist, etc. is to have a worldview that excludes universal thermodynamic laws. Their designs always fail given enough time. Always.

The idea of a market economy where millions to billions of locally dictated transactions summed up to a larger macroeconomy occurred to the ancients but were forgotten for a while.

It took a while after the fall of Rome for the West to begin to re-learn the principles. Isaac Newton was a key player, as was Galileo and others.

Often overlooked are the philosophers at the University of Salamanca in Spain. They derived the essentials of modern capitalism in response to the devastating inflation that led to the deflation of the Spanish Empire after so much gold and silver were brought from the New World.

Adam Smith’s “unseen hand” is an attempt to explain entropy before Boltzmann put the nitty-gritty of it into an equation.

The bottom line is straightforward. The universe is governed by physical laws and these laws even apply to economic systems and social organization. The will to power exhibited by the lefties is the will to defy these universal laws.

In the process of trying to line everyone up in the thug’s desired direction, huge amounts of energy must be expended, lies must be told, science must be hollowed out, and religious ideas that allow for the individual must be eradicated.

Understanding this introduces the key to defeat the tyrants and not just hope, but informed confidence that free people and free systems will prevail over the long term. Why? Because the universe says so through the Second Law of Thermodynamics.

How to defeat the lefties? Make them expend energy and resources. They are parasites and unable to generate their go-juice. They will self-deplete if forced to expend at the same time new sources of economic and intellectual fuel are walled off.

History and the laws of the universe are on the side of Conservatism, rightly understood. No matter how much our elites try to frame Conservatism as Noblesse Oblige or tax policy, if they omit the free market and its alignment with thermodynamic laws, then they just don’t understand.

Hence the rebellion against even the Romnyite school of elitists.

Mike Ryan is an engineering consultant to the minerals, fibers, and chemical industries.