There’s an odd thing that happens when politicians get scared: They grudgingly call in the smart guys and let them loose.

Most of us learn about this in elementary school: The smartest kid in the class is more or less abused until the class gets into real trouble; then they run straight to him and promise to do whatever he says.

That was how the Internet was created. It was a "smartest kid" project.

The event that scared the politicians into gathering the smart kids and setting them loose was Sputnik, launched in October 1957. The USSR surging ahead of the USA in space meant that they had to pull out all the stops. The resulting Advanced Research Projects Agency (ARPA) was where the Internet was born.

The Internet is structured different than anything a controlling type would make. (People in government are mostly controlling types; the smartest kid in class is most always not a control type.) The Internet’s fundamental design characteristic is decentralization.

Below on the left is a network structure that is suited to control: A typical telephone system, where everything goes through a central switchboard. Control just one point – the switchboard – and you control everything. We call this a star network.

On the right is a mesh network. There are multiple paths between any one point on the network and any other point. How can such a thing be controlled? 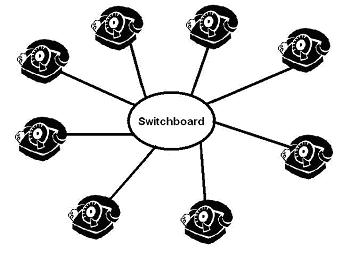 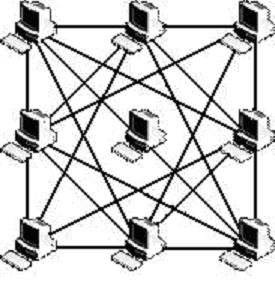 The little stroke of genius that made the mesh network possible was this: Rather than putting all the intelligence in one place (like at the switchboard), distribute it everywhere, a little bit at each autonomous machine.

When you send a message over the Internet, every packet of data you send contains the destination address, and it can find its way to the other end independently. Each routing point sends the data forward however it can. If one link along the path is broken, the data packets just routes around it, never consulting a central point for permission or instructions. 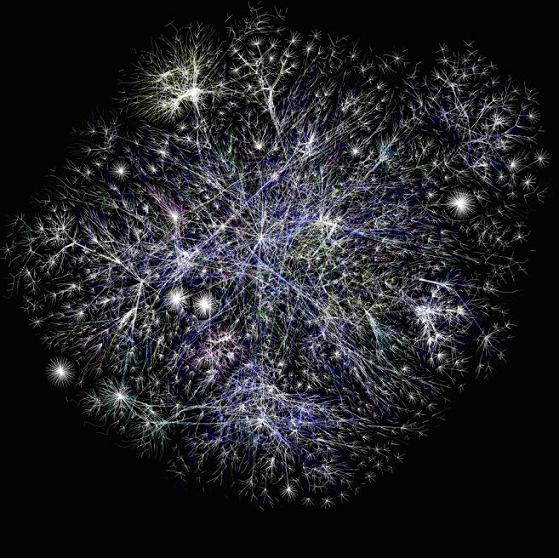 There are some small star-like sections, but for the most part, it is one huge mesh… and that’s what is saving us from the Electronic Police State.

Taming a giant mesh network is nearly impossible; even controlling it to any significant extent entails changing the structure of the network, and that takes time.

The Internet – the accidental creation of the post-Sputnik smart guys – birthed a new world of information exchange. Never before have men and women been able to communicate with almost any other person in the world, regardless of distance and almost without cost. This is a completely new, deeply intimate and immensely hopeful set of abilities.

To control the Internet is to control massive flows of human thought. In a very real way, it is a conquest of the human soul, and no man, or group of men, has that right.

The Electronic Police State is being constructed by changing the structure of the Internet’s mesh network. The first step is to setup choke points. This is accomplished by asserting control over all Internet Service Providers (ISPs).

Governments world-wide are passing laws that force local ISPs to monitor and record everything you do online. Then, if the police or the Feds want a record of your online activity, the ISP must provide it, and in many cases is forbidden (under pain of imprisonment) from letting you know that an inquiry was made.

Fortunately, bypassing these choke points is fairly easy. It involves creating a VPN (Virtual Private Network) connection from your computer to the other side of the ISP. Here’s what that looks like:

This type of connection is often called a "tunnel," because it tunnels through your ISP. Your traffic still passes through the ISP, but it is encrypted, so there is no intelligible information that can be seen, just a long string of gibberish that looks something like this:

The other technique of the EPS, and the harder one to evade, is mass surveillance.

The US, the UK, most of the EU nations, China, Russia, and other states are conducting mass Internet surveillance continuously. Plenty of criminal groups and semi-autonomous intelligence agencies are doing it too. It’s not as expensive as you might think, and certainly within the budget of an international player.

The VPN tunnel shown above is great for beating the choke point, but it is not effective for beating mass surveillance. By watching the amount of traffic that comes to your ISP and matching it with what comes out the other side of the tunnel, the watcher can simply pick up the trail there. 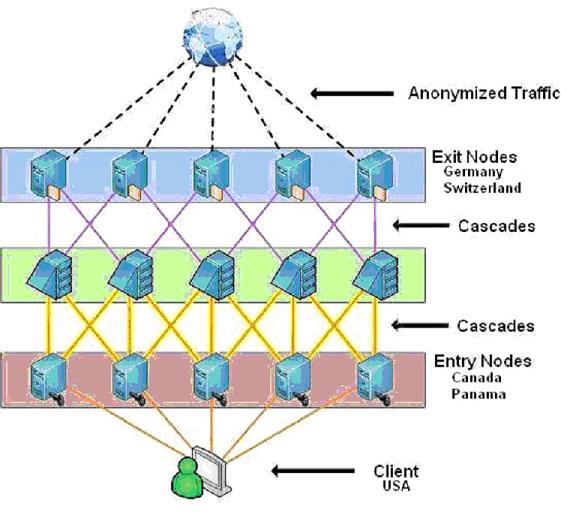 In this example, the client is in the US and a VPN tunnel runs from their computer to one of our entry nodes in either Canada or Panama, where the return home address is also stripped-off. This means that a single surveillance operation is likely to lose the traffic here.

Then, the traffic goes through one or more cascades. Think of this as a MixMaster for data.

Finally, it comes out the other side in still another jurisdiction, where Cryptohippie’s return address is added, so the sites you visit can respond to you (anonymously).

There is more to our operation than this (we do some exotic things like rotating IP addresses), but this is how mass surveillance is beaten.

A network of this type allows you to surf the web, use voice communications like Skype, email, chat, download files, etc., while remaining anonymous. At any point, it can be seen that signals are being sent, but the point of origin (and with it your identity) remains unknown.

A professionally-run anonymity network is how you protect yourself from the Electronic Police State, but there is a larger issue here than just protecting ourselves. The EPS is not just a practical problem, it is a moral offense. And that requires us to do what we can to defeat, dismantle, and deconstruct the EPS.

One of the best things you can do happens to be something we’ve been talking about a lot here at TTP: Defund & Disobey. We should all be doing whatever we can to starve the EPS of money and data.

This also relates to the TTP Business Network. One way to deprive the EPS of data is to build and extend the cash economy. The EPS monitors every credit card transaction on the planet, but they are mostly blind when it comes to cash.

So, do business in cash, or in gold or silver. Trade with friends. You can still report your income to the IRS, just don’t distribute customer information. (Where in the Constitution does it say you have to report everything you say or do to bureaucrats?)

So far as I know, there’s nothing illegal about this. Buy from others who are defunding and disobeying Leviathan, and avoid merchants that reveal your personal information.

But there is one thing that critically important to remove from the EPS: Legitimacy.

The EPS is legitimized by fear. You’ll notice that every time something goes wrong online, "more control" is immediately demanded as the solution. This fear is irrational, and here’s why: We’ve had ever-more control for a long time, and the problems remain. The magic of control hasn’t worked.

Protection from terrorists is accomplished by shooting them with bullets, not by grabbing every bit of personal information from kids, grandmas and businessmen. We all know pretty well who the terrorists are and where they live… monitoring every penny that goes in and out of Butte, Montana is not going to help them get shot.

Anti-privacy (pro-EPS) arguments pretend that central control produces perfection, which is a hysterical lie. We’ve had mass-centralization since the early 20th Century, yet we still had an overflow of terrorists and crooks. Why would we demand more of it at every possible opportunity? It’s crazy.

Central control of everything is not ordained by God, and it doesn’t work very well either.

The great fighters of old first made themselves invulnerable, and then awaited an opportunity to defeat the enemy.

This is the right strategy to use regarding the EPS: First protect yourself, then work to dismantle it.

TTPer Paul Rosenberg – "prosenberg" on the Forum – is the developer of the Cryptohippie.com virtual private network, which was the subject of Marco The Wizard’s column, Cryptohippie.