CRUZ IN THE CATBIRD SEAT

The answer is Yes. The only real financial asset Trump has – on which 90% of his claimed wealth is based – is the PR value of his name, so that companies will pay him oodles to put the label “Trump” on their products from neckties to real estate developments.

Trump’s genius is to take the old adage of Hollywood movie stars regarding publicity – “Good or bad, I don’t care what you (the media) say about me, as long as you spell my name right ” – to the max. Just exactly like Kim Kardashian or Bruce “Caitlyn” Jenner.

Trump plays the libtard media like a Strad – just like he does the GOPE (the E is for Elite), most of the conservative punditry, a dishearteningly large number of conservatives, and all Pub prez candidates with the one exception of a guy who’s smarter than he is.

That’s Ted Cruz. We’ll get back to him in a moment. Let’s get back to the other half of the Yes above. True, Trump is good for ratings so it makes business sense to run stories about him. But the libtard media aren’t just in business, their purpose in life is to advance their libtard political agenda. So what’s the libtard media’s agenda for constantly providing Trump with publicity?

More specifically, how does it advance their agenda of getting Hillary Clinton elected in 2016?

Asked that way, it’s obvious, right? First is to use Trump’s calling card of being divisive to tear the Republican Party apart – like this network news screen shot: 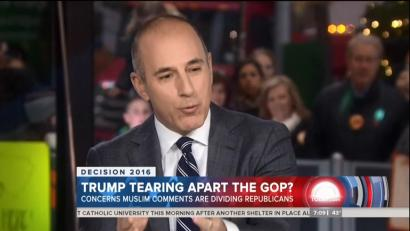 Second is building Trump up in whatever polls he leads to make him seem invincible in the primaries, to ensure his nomination thus guaranteeing a PIAPS landslide win. On the last part, they’re right about that. If Trump is the Pub nominee, he’ll lose worse than Goldwater in 1964. To think otherwise is utterly delusional.

The other side of this second coin is to ignore polls that challenge Trump’s dominance. Such as Monday’s (12/07) Monmouth Iowa Poll showing Cruz clearly leading Trump 24% to 19%, with Rubio at 17%, Carson 13%, and the rest in single digits. Iowa’s Pubs are deserting Carson for Cruz while abandoning Trump.[1]

This got crickets from the libtard media. All they can talk about is Trump’s wanting a ban on Moslem immigrants – somehow scandalously inflammatory when on November 19 the House passed the Security Against Foreign Enemies Act (SAFE Act) placing severe restrictions on Moslem immigration from Syria and Iraq by a vote of 289-137 – with 47 Dems voting Yes.

So here’s a prediction: Cruz is going to trounce Trump in Iowa on February 1st (the date of the Iowa Caucus). Two reasons. One is a guy named Bob Vander Plaats. He’s the titular leader of conservatives in Iowa – so much so that his endorsement of Rick Santorum in 2008 enabled Santorum to win Iowa. Bob endorsed Cruz this afternoon (12/10), which will accelerate Cruz beyond Trump and Carson to escape velocity.

The other reason is the collapse of the GOPE’s favorite Jeb Bush, leaving them with Marco Rubio as their only alternative to stop Cruz. The GOPE will be pouring in resources for Rubio in Iowa. Trump will fall farther behind Cruz, then behind Rubio, and will come in third on Feb 1st.

The myth of Trump’s winability will be shattered. New Hampshire on Feb 9th will be a Cruz-Rubio duke-out with Rubio likely ending on top, but with Trump a deflating balloon, Cruz will win South Carolina on Feb 20th in a walk, then clinch the whole enchilada on Super Tuesday March 1st.

That’s the prediction, and it’s made because it’s Cruz who’s playing Trump like a Strad. Cruz has a ground game – real boots on the ground who are very well organized in Iowa (as he has in every state in the South and many others) – while Trump has a froth of celebrity frenzy. Cruz is focused tightly on gaining enough delegates for nomination. Trump is focused on getting publicity.

And Cruz is happy to let him. Trump is Cruz’s Useful Idiot, garnering massive media for the Pub prez race, making outlandish proposals that scads of voters agree with to a large degree but to which Cruz can be the reasonable alternative.

That is, Cruz is positioning himself as the real Constitutional Conservative whom Trumpistas can turn to when they realize they can’t trust the presidency to him, and the guy moderate Pubs can turn to who will save the party from Trump.

It needs to be emphasized again: Cruz is smarter than Trump – much smarter. He fully realizes Trump’s value in shattering the Left’s dominance of the “Overton Window.” The link is to a must-read in NRO by David French on Wednesday (12/08).

Cruz rarely criticizes Trump as that would interfere with Trump clearing the path for him. Yet Cruz knows that at some time, Trump will self-destruct. An example came yesterday, when Trump was enraged that TIME didn’t name him Person of the Year rather than Angela Merkel.

It’s an example of which there are legion. Their cumulative effect will be for more and more Trumpistas to realize that they do not want another egomaniacal thin-skinned narcissistic horse’s ass as president. America has one already and we never want another again.

Cruz also understands something Trump doesn’t – that Trump and Bernie Sanders are popular for the same reason. Their followers, together with an immense number of voters in between them are totally, completely, absolutely fed up and disgusted with the government ruling elite in Washington, Pub and Dem.

Cruz sees 2016 coming down to him representing all of those folks passionately yet reasonably versus Hillary representing the hated DC elite. He knows he will eviscerate – as in disembowel – Hillary on the debate stage. He knows the odds favor him winning in a cakewalk.

And he’s not worried about Trump being a Ross Perot spoiler for the same reasons given by Krauthammer.

Of course he’s not going to win over leftie moonbats, nor those who want to remain dependent for the rest of their lives on government welfare checks. He knows that – but he also knows that a vast majority of voters are so fed up with Zero’s refusal to protect their security or do anything to give them jobs that the moonbats and parasites won’t matter.

That’s Cruz’s strategy to be in the catbird seat for the Pub primaries, the nomination, and the presidency. A month from now, after Christmas and by mid-January, we’ll see how it and TTP’s prediction is shaping up.

[1] A CNN poll was released the same day claiming Trump ahead of Cruz in Iowa 33 to 20%. That’s a disparity so huge between Monmouth’s that one needs to ask, which do you distrust? TTP chooses CNN, especially when a Quinnipiac University poll conducted just before CNN’s showed Cruz right behind Trump in Iowa 23-25%. CNN is rigging results for Trump.