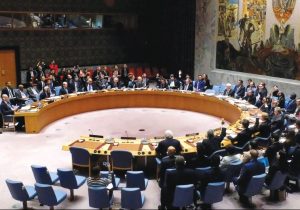 US Secretary of State John Kerry’s speech five days later (12/28) was the second.

On January 15, stage 3 will commence in Paris.

At France’s lame duck President François Hollande’s international conference, the foreign ministers of some 50 states are expected to adopt as their own Kerry’s anti-Israel principles.

The next day it will be Obama’s turn. Obama can be expected to use the occasion of Martin Luther King Jr. Day to present the Palestinian war to annihilate Israel as a natural progression from the American Civil Rights movement that King led 50 years ago.

Finally, sometime between January 17 and 19, Obama intends for the Security Council to reconvene and follow the gang at the Paris conference by adopting Kerry’s positions as a Security Council resolution. That follow-on resolution may also recognize “Palestine” and grant it full membership in the UN.

True, Kerry said the administration will not put forward another Security Council resolution.

But as Prime Minister Benjamin Netanyahu explained in his response to Kerry’s address, there is ample reason to suspect that France or Sweden, or both, will put forth such a resolution. Since the draft will simply be a restatement of Kerry’s speech, Obama will not veto it.

Whether or not Obama gets his second Security Council resolution remains to be seen. But whether he succeeds or fails, he’s already caused most of the damage. A follow-on resolution will only amplify the blow Israel absorbed with 2334.

Resolution 2334 harms Israel in two ways. First, it effectively abrogates Resolution 242 from 1967 which formed the basis of Israeli policy-making for the past 49 years. Second, 2334 gives a strategic boost to the international campaign to boycott the Jewish state.

Resolution 242 anchored the cease-fire between Israel and its neighbors at the end of the Six Day War. It stipulated that in exchange for Arab recognition of Israel’s right to exist in secure and defensible borders, Israel would cede some of the territories it took control over during the war.

Resolution 242 assumed that Israel has a right to hold these areas and that an Israeli decision to cede some of them to its neighbors in exchange for peace would constitute a major concession.

Resolution 2334 asserts that Israel has no right to any of the lands it took control over during the war. From the Western Wall to Shiloh, from Hebron to Ariel, 2334 says all Israeli presence in the areas beyond the 1949 armistice lines is crime.

Given that Israel has no right to hold territory under 2334, it naturally follows that the Palestinians have no incentive to give Israel peace. So they won’t. The peace process, like the two-state solution, ended last Friday night to the raucous applause of all Security Council members.

It calls on states “to distinguish in their relevant dealings, between the territory of the State of Israel and the territories occupied since 1967.”

Since no Israeli firm makes that distinction, all Israeli economic activity is now threatened with boycott. Tnuva is an “occupation” dairy because it supplies communities beyond the 1949 lines.

Resolution 2334 gives Europe and its NGOs a green light to wage a complete trade and cultural boycott against all of Israel.

Obama is not using his final weeks in office to wage war on Israel because he hates Netanyahu.

He is not deliberately denying 3,500 years of Jewish history in the Land of Israel because the Knesset is set to pass the Regulations Law that will make it marginally easier for Jews to exercise property rights in Judea and Samaria, as Kerry and UN Ambassador Samantha Power claimed.

Obama’s onslaught against Israel is the natural endpoint of a policy he has followed since he first entered the White House. In June 2009, Obama denied the Jews’ 3,500 years of history in the Land of Israel in his speech in Cairo before an audience packed with members of the Muslim Brotherhood.

Instead of the truth, Obama adopted the Islamist propaganda lie that Israel was established because Europe felt guilty about the Holocaust.

Throughout his presidency, Obama has rejected the guiding principle of Resolution 242. His antisemitic demand that Israel deny its Jewish citizens their civil and property rights in Jerusalem, Judea and Samaria simply because they are Jews is just as antithetical to 242 as is Resolution 2334.

In his speech, Kerry repeatedly castigated the government while flattering the Israeli Left in yet another attempt to divide and polarize Israeli society. Kerry’s professed support for the Israeli Left is deeply ironic because Israeli leftists are the primary casualties of Obama’s anti-Israel assault.

In the post-242 world that Obama initiated, the UN makes no distinction between Jerusalem and Nablus, between Gush Etzion and Jenin, or between Ma’aleh Adumim and Ramallah.

For the next three weeks, the government’s focus must be centered on Obama and minimizing the damage he is able to cause Israel. Since Israel cannot convince Hollande to cancel his conference or Obama not to give his speech, Israeli efforts must be concentrated on scuttling Obama’s plan to enact a follow-on resolution.

To scuttle another resolution, Israel needs to convince seven members of the Security Council not to support it. Only measures that secure the support of nine out of 15 Security Council members are permitted to come to a vote. The states that are most susceptible to Israeli lobbying are Italy, Ethiopia, Japan, Egypt, Uruguay, Kazakhstan, Ukraine and Russia.

Netanyahu’s furious response to 2334 advance the goal of blocking a vote on a follow-on resolution in two ways. First, they create Israeli leverage in seeking to convince member states to oppose voting on an additional resolution before January 20.

Second, Netanyahu’s seemingly unrestrained response to the Obama administration’s onslaught enables Donald Trump to join him in pressuring Security Council members to oppose bringing a new resolution for a vote.

By taking an extreme position of total rejection of Obama’s actions, Netanyahu is enabling Trump to block a vote while striking a moderate tone.

In three weeks, Obama’s war with Israel will end. His final legacy – the destruction of the land-for-peace paradigm and the two-state policy-making model – obligate Israel, for the first time in 50 years, to determine by itself its long-term goals in relation to the international community, the Palestinians and Judea and Samaria.

Regarding the international community, the Security Council opened the door for its members to boycott Israel. As a result, Israel should show the UN and its factotums the door. Israel should work to de-internationalize the Palestinian conflict by expelling UN personnel from its territory.

The same is the case with the EU. Once Britain exits the EU, Israel should end the EU’s illegal operations in Judea and Samaria and declare EU personnel acting illegally persona non grata.

There is also the question of the Palestinian militias that are deployed to Judea and Samaria as part of the peace process that Obama and the PLO officially ended last Friday. In the coming months, Israel will need to decide what to do about these hostile militias that take their orders from leaders who reject peaceful coexistence with Israel.

Finally, there are the territories themselves. For 50 years, Israel has used the land-for-peace paradigm as a way not to decide what to do with Judea and Samaria. Now that 242 has been effectively abrogated, Israel has to decide what it wants.

The no-brainer is to allow Jews to build wherever they have the legal right to build. If the UN says Israel has no rights to Jerusalem, then Israel has no reason to distinguish between Jerusalem and Elon Moreh.

More broadly, given that for the foreseeable future, there will be no Palestinian Authority interested in making peace with Israel, Israel needs to think about the best way to administer Judea and Samaria going forward. The obvious step of applying Israeli law to Area C now becomes almost inarguable.

Shortly before Obama took office eight years ago, he promised to “fundamentally transform” America. Trump’s election scuttled any chance he had of doing so.