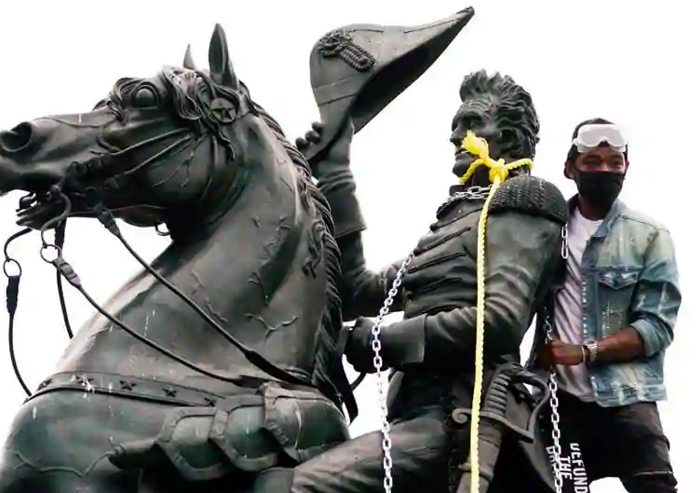 When I see the images from Lafayette Square on Monday night (6/22) or from the weekend across the country of radical leftists and anarchists tearing down or defacing memorials to some of America’s greatest heroes, what I keep wondering is:

Where are the conservative leaders who have said so much and done so little to defend our history?

For decades, the conservative movement has profited off the invocation of the American Founding. Multiple political analysts have said over the years that the biggest mistake Democrats made was letting Republicans have The Bible and the Flag, and the right has certainly profited from it.

Wrapping themselves in the language of the Founding Fathers, filling their buildings with quotes, books, busts, statues, and artist’s renderings, conservatives have thrived by making themselves the defenders of American history against a verbally iconoclastic left.

But in practice, they spent more time advocating for lower taxes, feel-good donor interests, and pro-business regulatory reforms than the cultural defense they used to make the money roll in.

Meanwhile, the left has marched through our institutions of power: the schools and the academy, the media, the creative arts, and the central authorities of our greatest cities, amassing near-total control and influence over our culture. They have tried to grasp permanent hold of the narrative, audit conservative activists, and subdue religious defiers.

Now they intend to subjugate the nation’s children to a woke ahistorical conspiracy about our founding and inculcate them with the idea they are permanently stained by irredeemable acts of racism that happened long before they were born, and for which they are not guilty.

This is power, amassed intentionally over half a century, and they are wielding it now in destructive ways. Now that the left has become not just verbally iconoclastic, not just changing the names of streets or buildings but physically assaulting the past, why have conservatives gone quiet?

Why are they standing back instead of standing up to defend our history? Why is it that a bunch of South Philly Italian bros have more gumption about a statue of Columbus than the people who have spent decades invoking Washington, Jefferson, Lincoln, and more to raise money for their causes and win elections?

Other than a handful of members of Congress, Republicans seem content to sit back and leave the response to President Trump.

Sitting back and watching things simmer have consequences. If not for the intervention of law enforcement with pepper spray in Washington, D.C. last night, protesters would have pulled down the statue of Andrew Jackson.

It is a priceless artifact sculpted by Clark Mills in 1852 – the first bronze-cast statue and the first equestrian statue in the history of the United States.

I used to eat lunch by it when I worked at the White House. At the base is an inscription from a toast Jackson once gave: “Our Federal Union, It Must Be Preserved.”

So who will do the preserving? Not our conservative leaders in Washington, who are too busy gathering signatures for pointless letters.

Last Monday night it was a multi-ethnic group of working class DC cops who stood guard, their facemasks flecked with the spittle from woke white women. Being taunted by woke white men with man buns. And getting called a traitor to their race.

What I want to see right now more than anything is elected officials and community leaders who are willing and ready to link arms with these cops and physically take part in cleaning up this mess and defying the mob.  Emily Jashinsky was in the midst of them last night.

“Some protesters pleaded with others to stop throwing objects at police from the back of the group because it led to the people up front getting tear-gassed; others disputed that protesters were throwing anything. A rumor reached the front of the protest that demonstrators were telling on their overly aggressive peers. Seasoned veterans shouted that transgressors should be corrected, not exposed.”

If any clashes broke out, the protest’s ostensible leaders wanted to make sure they could claim officers were in the wrong, lashing out disproportionately at supposedly peaceful demonstrators. It was a chaotic scene, but had an underlying sense of organization, suggesting the group is intentional and plans to keep the area formally dubbed ‘Black Lives Matter Plaza’ occupied, setting the stage for more conflict right on the president’s doorstep.”

“MIA Republicans really face a crucial choice in a pivotal moment right now: stand up to the mob or surrender the nation to anarchists. Right now, I’m not so convinced Republicans are choosing the former.”

Who will take a stand to prove him wrong? And when I say that, I don’t mean sending out a tweet drafted by your comms shop. I mean proving to us all that you aren’t scared.

The Shaun Kings of the world are so emboldened that they’re calling for destroying statues and stained glass of Jesus.

Will Republicans wait around to find out that Catholic nuns have bigger stones than they do in defense of what they value? Because I assure you, they do.

Theodore Roosevelt, for whom they are coming now to complete the degradation of all the presidents on Mount Rushmore, was the 37-year-old president of the Board of Police Commissioners of New York City when he wrote:

“To sit at home, read one’s favorite paper, and scoff at the misdeeds of the men who do things is easy, but it is markedly ineffective. It is what evil men count upon the good men’s doing.”

So conservative leaders must stop doing it. Because if there’s one rule we’ve learned about the modern day woke mobs, it’s that they only start with the statues. Next, they come for you and me.

Ben Domenech is the publisher of The Federalist.