2 The Point News » Behind The Lines » Free Articles » COMMIE DAY 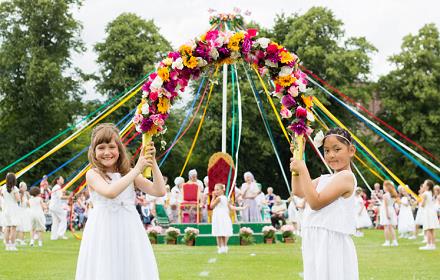 What May Day should be, happy and joyous 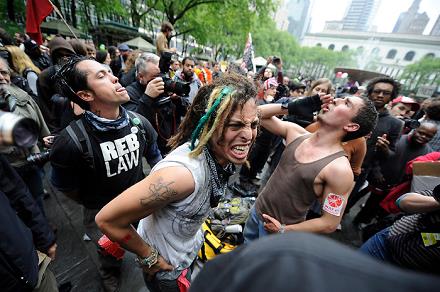 What Commies and the Fascist Left have done to May Day

Berlin, Germany.  For millennia, especially here in Europe, the First of May was a happy, joyful celebration of life after winter, with dancing around a Maypole and crowning a pretty girl with flowers as Queen of May.

I grew up in California. When we were kids, my sisters would always get up early to pick flowers, and leave them in a basket at the front door for Mom, our family’s Queen of May.

Instead, it’s called International Workers Day.  Since it was the invention of Communists in 1889, it should be called Commie Day.  Only Communists could take an innocent celebration of springtime and turn it into celebration of murder, terrorism, hate, and envy.

Here’s the story.  It begins not in Europe but in America.  A popular German newsite explains Why Is May 1st a Public Holiday in Germany? –

“The reason why banks, post offices and most businesses are closed on this day has to do with the fact that it’s an occasion to celebrate workers’ rights. Germany’s observance of Tag der Arbeit  (Worker’s Day) dates back to 1886 America, when a strike involving thousands of workers at Haymarket Square in Chicago.”

One hundred and twenty six years ago on the evening of May 3, 1886, a group of men met in the basement of Greif’s Hall on Lake Street in Chicago.  Almost all of them were recent immigrants from Germany, and what brought them together was a hatred they had in common.

They called this hatred by various names – they were “anarchists,” “socialists,” “communists,” “syndicalists,” “revolutionaries” – all code-words for anti-capitalist.

They all hated capitalism with a fanatically violent fervor.  They all claimed to be champions of “workers,” of employees, people who had jobs – and above all human beings on earth they hated those who provided those jobs, the entrepreneurs who created the companies that made those jobs possible.

One of them was Louis Lingg from Mannheim, who had come to America less than a year before.  He had taught himself how to make hand-held bombs containing dynamite (invented by Alfred Nobel in 1867), and at the meeting in Greif’s Hall, he gave one of his bombs to Rudolph Schnaubelt, the brother-in-law of one of the meeting’s organizers, Michael Schwab.

The following evening, May 4, a demonstration was held in support of “workingmen’s rights,” organized by an anarchist-socialist German-language newspaper in Chicago, Arbeiter-Zeitung, and its editor, August Spies from Hesse, Germany.  It was at Haymarket Square, at West Randolph and Desplains Streets.  It was chilly and drizzly, with some 600 in attendance.

At about 10:30pm, with a speaker calling out “To arms!” and advocating violence, Police Inspector John Bonfield, at the head of a contingent of 60 uniformed policemen, called for the meeting to be over and the crowd to disperse.

Rudolph Schnaubelt lit Lingg’s bomb and tossed it into the police.  Officer Matthias Degan was killed on the spot, six officers died thereafter, and dozens wounded.

A number of demonstrators then pulled out revolvers and began firing at the police, who returned fire, killing four.

History knows this as The Haymarket Massacre.  There were eight arrests, including Spies, Schwab, Lingg, and Schnaubelt.  Bombs and bomb materials were found in Lingg’s apartment.  Schnaubelt escaped (fleeing to South America, he died in Buenos Aires in 1901).

Five of the defendants were sentenced to be hung – but only four were, as Lingg committed suicide by smuggling a blasting cap into his cell, which he lit and put in his mouth. It blew off his lower jaw, and it took hours for him to die in agony.

Lingg, along with the four who were hung, lies buried in Chicago’s Waldheim Cemetery.  And now comes the part of this story that may make you ill.

There is a Monument to the Haymarket Martyrs in the Waldheim Cemetery – and it is not in honor of the policemen murdered by the anarcho-communists.  It is a monument to the murderers.  Not only that, it is a Shrine of the Left’s, a pilgrimage site.

The Haymarket Murderers have been turned into heroes. Just like a Palestinian terrorist suicide bomber who murders Israeli children is hailed as a shahid, a martyr. 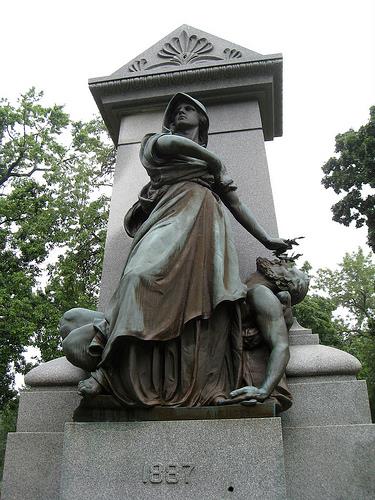 And it gets worse.  It is officially designated (by Clinton in 1997) as a National Historical Landmark, stating:  “This monument represents the labor movement’s struggle for workers’ rights.” 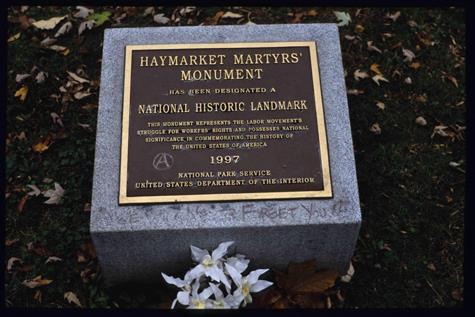 It is a monument to Communist anarchic murder.  Which is why the Communist Party of Illinois calls its website The Spirit of Haymarket.  And why May Day – May 1st – is Communism’s “day of international resistance and solidarity against capitalism,” designated as such by the Former Soviet Union, and celebrated by lefties in scores of countries the world over.

Only Communists could hijack May Day (May 4th, Haymarket Martyrs Day – close enough to May 1st to hijack), and celebrate terrorist murder instead of life.  Only the Marxist Fascist Left could take an innocent celebration of springtime and turn it into a day of hate, envy, and beggary.

But that’s what happened, and what’s happening on May Day today.  Of course, the flagship of the Hate America Fascist Left – the New York Times – celebrates all the protests “from Florida to New York to California on International Workers’ Day” in this morning’s front page headline: US May Day Immigration Protests Target Trump, Fall Elections.

Commies will out in force in Washington DC today:  see DCMayDay.org.  There’ll be similar spleen-venting trashing dozens of other US cities.

It’ll be fun to watch the Lying Swine Fake News Waste Stream Media portray them as noble fighters for human rights – fun because their hatred is eating the Fascist Lefties alive.

And much more so now.  When you watch a newscast about them, just imagine how ‘Splodey Head torched their brains will be upon hearing that both USA Today and the President of South Korea say President Trump deserves the Nobel Peace Prize.

Even the biggest Pub Squish in the Senate, Lindsey Graham, says our Potus deserves it.  Ereyesterday (4/29), Graham joked on Fox News Trump winning the Nobel would cause “mass casualties because I think a lot of liberals would kill themselves.”

That would be a win-win two-fer for the history books.  So have fun on May Day.  Celebrate the joyousness of life.  Pick some flowers for the Queen of May in your life.  And remember – today is Commie Day only for Commies.  Not for us.