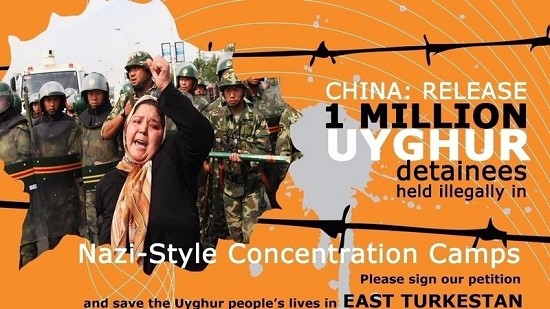 China’s Far West of Xinjiang is twice the size of Texas and almost as big as Alaska at 640,000 square miles.  It borders Mongolia, a tiny bit of Russian Siberia, Kazakhstan, Kyrgyzstan, Tajikistan, a tiny bit of Afghanistan, Pakistan, India, and Tibet. 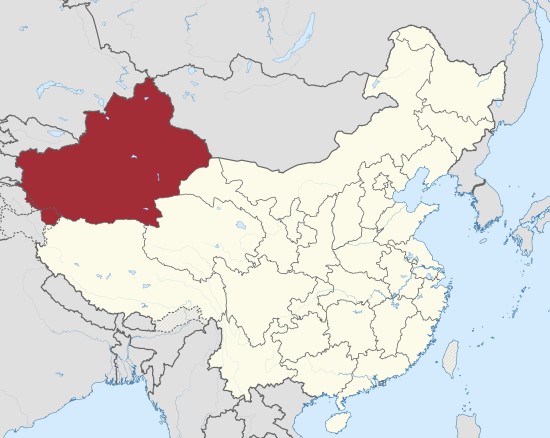 Beijing officially calls it the Xinjiang Uyghur Autonomous Region, as almost 50% of Xinjiang’s 25 million people are Uyghurs (wee-gurz), a Turkic Caucasian ethnic group that is Islamic in culture and religion.  Turkic-Islamic ethnicities such as the Kirghiz and Kazakhs comprise another 10%.

To many of them, Xinjiang (“New Frontier” in Mandarin) is East Turkestan, looking upon the 5 “Stans” of the former Soviet Union collectively as inspirationally independent West Turkestan.

Not long ago, together they were almost 100%, but due to massive relocation of millions of Han Chinese to Sinicize the region, their demographic dominance has been seriously diluted by Beijing design.

Thus it is tragically ironic that this “Uyghur Autonomous” province has been increasingly turned into a concentration camp imprisoning vast numbers of Uyghurs and other Moslems.

Last fall, 646 international scholars signed a statement condemning the internment of Uyghurs and other Turkic Moslem minorities in the Xinjiang region of western China, stressing that mass internment of citizens on the basis of ethno-cultural and religious identity is unprecedented in the twenty-first century and should not be tolerated by the international community.

The academics from 40 countries called on governments, multi-lateral organizations, businesses, and academic institutions to apply pressure on the Beijing party-state to cease its campaign of unprecedented repression.

First conquered by the Qing dynasty in the 18th century and later by Mao Tse-tung in 1949, many Uyghurs, frustrated at being a conquered people, became even more frustrated in the 1990s, as central Asian republics gained independence from the former Soviet Union.

They were already alienated by long term discrimination by Chinese officials, including difficulty accessing passports, hotels, and banking services. Legitimate requests for more religious and cultural respect were viewed as “terrorism.”

Academic Adrian Zenz of the School of Culture and Theology in Germany estimates that without any trace of due process there are now more than a million Uyghurs of Xinjiang aged 20 – 79 incarcerated in up to 1,200 facilities. In a talk at Harvard University’s Fairbank Center for Chinese Studies, he noted that at the bleak internment camps, inmates are exposed to endless hours of “re-education” forcing them to think like Beijing.

Zenz added that the intent of the brainwashing is to “kill the memory of who they are, wipe out their separate identity, language and history…even the slightest perceived infraction, such as having a copy of the Koran on a phone or making a contact abroad, can result in incarceration.”

In 2017, the Chinese regime began erecting a “re-education” gulag for Uyghur and other Moslem communities. It was similar to the forced labor camps established across China after mid- 1999 for Falun Gong and other prisoners of conscience. Both networks receive inmates arrested by public security agencies without any pretense of a hearing, trial, or appeal.

Witnesses said that to date the international community as a whole has failed both to hold China accountable and to protect the Turkic Moslem majority of Xinjiang. Some urged Canada to coordinate its efforts with like-minded states to condemn publicly China’s party-state for its actions. Others called for the imposition of targeted economic measures against officials who have led the repression.

The brutal campaign has caused Uyghurs to flee to central and southeast Asia to escape. They share ethnic, linguistic, and religious ties with Central Asian populations—Kazakhstan, Kyrgyzstan, and Tajikistan, which border Xinjiang—but which are now all economically dependent on China and have yielded to Beijing pressure on the Uyghurs.

Forced organ pillaging from Uyghurs for profit by the party-state appears to have preceded that from Falun Gong. Nobel Peace Prize nominee and co-founder of the International Coalition to end Organ Abuse in China Ethan Gutmann’s 2014 book, “The Slaughter,” places the persecution of the Falun Gong, Tibetan, Uyghur, and Eastern Lightening Christian communities in context. He explains how he arrived at his “best estimate” that organs of 65,000 Falun Gong and “two to four thousand” Uyghurs, Tibetans and Christians were “harvested” in the 2000- 2008 period.

The Uyghur leadership internationally, aware of the common plight victims of increasing Chinese totalitarianism under Xi face, has shown solidarity with Falun Gong. Governments should continue protesting victimization of the Uyghur community. The 2018 Universal Periodic Review (U.P.R.) by the UN Human Rights Council showed glimmers of light, but future efforts should not wait till China’s next turn in the U.P.R. cycle several years from now.

As the birthday of the Scottish national poet, Robbie Burns, is commemorated, words from his 1784 dirge are still meaningful: “Man’s inhumanity to man makes countless thousands mourn!”

Both faith and secular communities worldwide, especially the Moslem-majority nations, should speak out about the tragedy unfolding for Uyghurs across Xinjiang.  It is arguably the largest human rights violation in the world today.

David Kilgour was a Member of Canada’s Parliament from 1979-2006, serving at one time as Canada’s Secretary of State. He is a long time activist for the rights of Christians worldwide, and human rights particularly in China.