Published May 9, 2019 | By Ambrose Evans-Pritchard 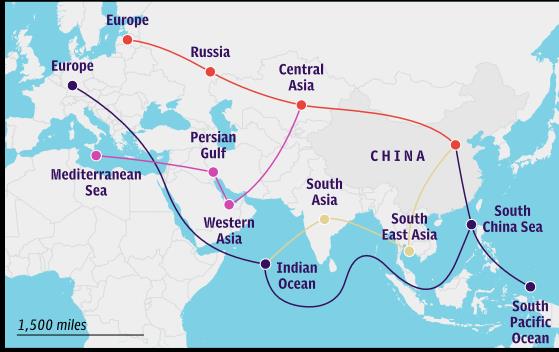 There’s just one flaw in Xi Jinping’s plans for global economic conquest. It’s that China has run out of money. The $8 trillion headline figure for the New Silk Road is romantic fiction.

The Belt and Road – as it has become known since maritime links were added to the original Marco Polo caravan route – is China’s plan of infrastructure development and investments in 152 countries and international organizations.  Yes, 152.

It may have made financial sense when China was running a fat current account surplus. This reached 10% of GDP in the final stages of the export boom from 2004 to 2008.

China had to recycle this money back into the global economy much as the US was compelled to recycle its vast surpluses through the Marshall Plan at the end of the Second World War. It was a temporary answer to a temporary distortion in global trade flows.

Or to take another parallel, it is akin to that misleading moment in the late Eighties when Japan was buying everything from Pebble Beach golf courses to the entire market stock of impressionist paintings, many still hanging in Nomura’s Tokyo boardroom.

Beijing’s foreign reserves ballooned by mid-2014 to a world-record $4 trillion as it bought US Treasuries, gilts and bonds to hold down its currency – deemed necessary for that phase of China’s catch-up growth development model.

This had inherent limits. Hence the switch to project investment in China’s Asian backyard where there was a chronic shortage of capital for infrastructure. The Asian Development Bank (ADB) feared a capital deficit of $8 trillion across the region. It all seemed to match.

The global economic system has changed radically since then. The authorities had to tighten capital controls to stem a dangerous leakage of funds – arguably capital flight – during the currency scare in late 2015 when the country was losing $100bn a month.

Today, China’s current account surplus has essentially vanished. The International Monetary Fund thinks it will be 0.5% of GDP this year. It will then go progressively negative through the early 2020s.

Gabriel Felbermayr, head of Germany’s Kiel Institute for the World Economy, says the overseas lending boom is already fading. “The source from which China is financing its international investments is drying up,” he said. 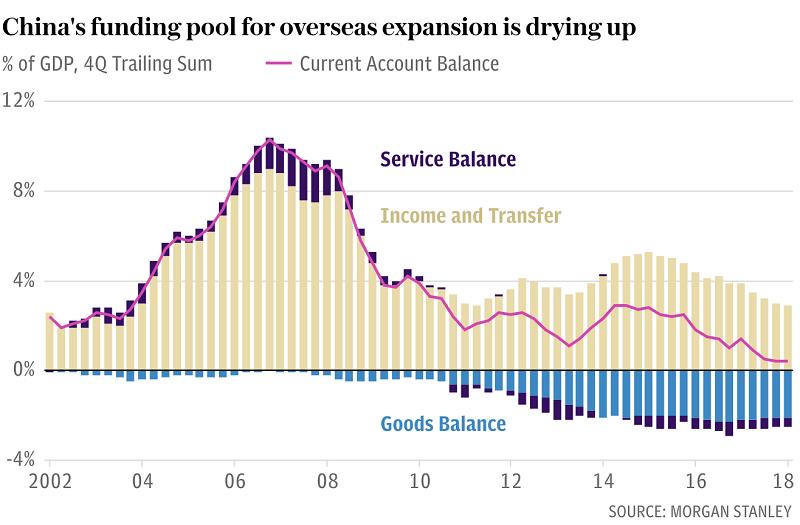 Definition is treacherous. The “Belt and Road” has come to cover everything: a Christmas tree of aspirations, extending to the Arctic, outer space, cyberspace and even art exhibitions.

Brand dilution has been endemic since president Xi made the Silk Road his signature theme, written into the Communist Party’s constitution. Everybody has jumped on to the bandwagon.

Xi vows to purify the project. He told the Belt and Road forum in Beijing a fortnight ago (4/26) that it must focus on “quality growth” that meets global standards. “We must adhere to the concept of openness, greenness and cleanliness. We must operate in the sun,” he said.

James Lord, from Morgan Stanley, says China is becoming a net importer of capital as the country ages. It will require net inflows rising to $400bn within a few years. Beijing will have to compete for capital like everybody else.

Hence this year’s push by Xi for more joint ventures with foreign banks and funds. Beijing’s official report recast the venture as an “open, inclusive initiative” without political ideology. “It is not a ‘China club’,” it said.

This counters worldwide criticism that the Belt and Road is a cloak for strategic expansion, as well as being a vehicle for “debt diplomacy” for the poorest countries.  All at the same time China needs the world’s money.

“China’s overseas lending is almost entirely financed in US dollars, and they are running short of those dollars,” says George Magnus from the Oxford University’s China Centre.

Magnus said the drive to transform the yuan into a global funding currency is doomed in a context of tight capital controls and zero trade surpluses. “They have to tone down the hype and look for other countries to work with,” he said.

“When you bring in outside money, you lose control,” says Jonathan Hillman, from the Centre for Strategic and International Studies in Washington.

Hillman said the Belt and Road is an elastic term. Some fully-signed up members such as Korea have received almost nothing. Refuseniks such as India or Germany get investment anyway.

Japan’s overseas investments are larger than those of China but are happening without fanfare. The multilateral Asia Development Bank (ADB) – the president of which is always Japanese – quietly lent $36bn last year for development projects.

After hubris comes scrutiny, or moving from “big freehand brushwork” to “fine brushwork” in the elegant euphemism of the Communist Party.

The catalogue of misadventures is by now well known.

In Europe, Montenegro’s “highway to nowhere” wins the prize. The ambitious link from the Adriatic port of Bar through mountains to the Serbian hinterland was deemed unsustainable in two feasibility studies. There is not enough potential traffic to recoup toll revenue.

The Export-Import Bank of China paid for a secret study that concluded otherwise. Work by China Communications Construction was launched. The terms of the contract mean that any dispute must be settled in Chinese courts. In the case of default, China can seize Montenegrin land.

The IMF says the unfinished project has pushed Montenegro’s debt ratio from 63% to 80% of GDP and is testing fiscal limits. The fallout risks delaying EU accession since the country now breaches Maastricht rules.

In the case of the Hambantota Port Chinese Debt Trap in Sri Lanka – where the government signed away a 99-year lease after failing to repay Chinese loans – the interest rate on the debt was 6.3%.

“This is two to three times what the World Bank of the ADB charge. There is a myth out there that Chinese money comes cheap,” said Hillman from CSIS.

“Lending practices are very opaque. One of the best things the Chinese can do at this point is to make the terms of the contracts public, as all the multilateral development banks do,” he said.

Perhaps the most bizarre feature of the Belt and Road is that it has become the “lender of last resort” for the construction of coal plants, according to the Institute for Energy Economics and Financial Analysis.

The anti-coal Institute for Energy Economics & Financial Analysis says Chinese lenders – chiefly state banks – are funding $36bn of coal projects across the world that will add 102 gigawatts of coal capacity. Only a third use best practice “ultra-supercritical” technology.

Chinese state entities are deeply involved in the construction and management of the plants. “The Belt and Road is an off-ramp for China’s own excess capacity problems. It is often old technology, and these plants will have a shelf life of 30 or even 50 years,” says Hillman.

They are concentrated in countries such as Bangladesh, Vietnam and Pakistan. The debtors risk being stuck with stranded assets within a decade.

President Xi has heeded the criticism. This year’s Belt and Road forum has become a paean to “greenness.”  Xi announced he is launching an “international green development coalition.” The official report extolled “a way of life and work that is green, low-carbon, circular and sustainable.”

And if you believe that……