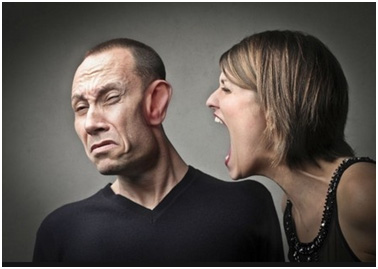 If you’ve read this and you’re going “uh, what?” because you’re a woman and not Marxist, don’t worry. What I’m doing is echoing a WaPo editorial by Victoria Bissell Brown (a retired Grinnell College history professor) last Friday (10/12) who starts her insanely stupid article by asking:

Why can’t men organize to change themselves?

Why, Vicky, (yeah, I’m fairly sure you don’t want me to call you Vicky, but since you’re functioning at about a six-year-old level, that’s the best you deserve) that’s an amazing question, that probably made the Post editors drool at your amazingness.

It’s almost as good as “why can’t you take a valium like a normal human being, and stop being crazy?” which is what your editorial made me ask.

Her article starts with a confession of spousal abuse:

I yelled at my husband last night. Not pick-up-your-socks yell. Not how-could-you-ignore-that-red-light yell. This was real yelling. This was 30 minutes of from-the-gut yelling. Triggered by a small, thoughtless, dismissive, annoyed, patronizing comment. Really small. A micro-wave that triggered a hurricane. I blew. Hard and fast.

Okay, first, if you’re in the habit of yelling at your husband for not picking up his socks, Vicky, no wonder that he blows through red lights. You probably don’t let him own a gun and the poor man has no other way to escape your tyrannical, insane blow ups.

What you’re doing is straight up spousal abuse, because you’re “triggered”. No? How would you feel if your husband yelled at you for no reason because he was “triggered”? Would you think that was okay?

And it terrified me. I’m still terrified by what I felt and what I said.

Again, if you’re in the habit of being terrified by what you felt, you might need some introspection, or… you know, growing up.

Look at that number, lady. Isn’t it time you grew up and started thinking about the consequences of what you do, and just how repulsive what you say is?

I am a grandmother. Yet in that roiling moment, screaming at my husband as if he represented every clueless male on the planet (and I every angry woman of 2018), I announced that I hate all men and wish all men were dead. If one of my grandchildren yelled something that ridiculous, I’d have to stifle a laugh.

Shame on your husband for sticking it in crazy. Shame on you for being an idiot. I ain’t laughing Vicky. Are any of your grandchildren male? I presume so since you don’t say “my granddaughters.”

What a thrill it must be to them to know crazy-granny wants them dead for the crime of being born with a penis. How warm-fuzzy they must feel. How affirmed. How empowered.

Or, in other words, do you care anything about how your words and actions make others feel? Or are you basically a toddler, throwing tantrums and throwing your weight around because you expect the world to cater to your every whim?

Don’t answer that Vicky. We know which one it is. And we cringe for you, but more so for your husband and kids.

My husband of 50 years did not have to stifle a laugh. He took it dead seriously.

No. He didn’t. He took it with the abashed, beaten inability to defend himself of an abused spouse, Vicky. Seriously would be packing his bags and leaving, or telling you need mental help. What he did was far scarier.

That man needs help. He needs an intervention. He needs someone to assure him he doesn’t deserve to be raged at and abused because he has a penis. It’s time to stop the abuse. No one would condemn a woman in the same situation who left or became violent. And it’s time this man realizes he’s worth as much as a woman.

For a moment, it occurred to me to be grateful that I’m married to a man who will listen to a woman.

Think how well it would sound if a man said: “It occurred to me to be grateful because my wife would listen to a man…” When that man was self-admittedly raging incoherently and irrationally at her. Just think about it. Again, that man needs help.

The winds calmed ever so slightly in that moment. And then the storm surge welled up in me as I realized the pathetic impotence of nice men’s plan to rebuild the wreckage by listening to women. As my rage rushed through the streets of my mind, toppling every memory of every good thing my husband has ever done (and there are scores of memories),

Winds, rage, toppling… yeah, this is a storm happening inside you and you’re not in control at all? Nice way to pass the buck, Vicky, but you need Thorazine. Or you know, you could grow up.

I said the meanest thing I’ve ever said to him:

We don’t believe you, Vicky. I suspect you don’t even know when you’re being mean. Being a raging narcissist, you use the fact he’s male to beat him over the head all the time. You don’t even notice it.

Don’t you dare sit there and sympathetically promise to change. Don’t say you will stop yourself before you blurt out some impatient, annoyed, controlling remark.

Depends, Vicky. Are you going to promise him to change when you go out of your mind and act like a fricking loon? No? Then you’re right. He shouldn’t sit there and listen, much less promise to change. But you know, this is what you’ve done. You’ve abused him to the point he can’t defend himself.

You’re correct Vicky. He doesn’t hit women. On the other hand, if he set fire to you in your bed in the middle of the night, he wouldn’t be convicted by anyone who read your crazy editorial.

In the centuries of feminist movements that have washed up and away, good men have not once organized their own mass movement to change themselves and their sons or to attack the mean-spirited, teasing, punching thing that passes for male culture. Not once. Bastards. Don’t listen to me. Listen to each other. Talk to each other. Earn your power for once.

Let me rephrase that for you, Vicki:  “Good men refuse to become women. They talk in ways I don’t like, and they’re far more physical than I like. Waa, waa, waa.”

The gender war that has broken out in this country is flooding all our houses.

No, Vicky. Only the houses of crazy women.

Only crazy people think the most important thing is the fight between some archetypal male and female, instead of just looking after and caring for those we love.

It’s rising on the torrent of memories that every woman has. Those memories have come loose from the attic and the basement where we’ve stashed them. They are floating all around us and there is no place left to store them out of sight. Not just memories of sexual abuse. Memories of being dismissed, disdained, distrusted. Memories of having to endure put-downs at the office, catcalls in the parking lot, barked orders at a dinner party.

Once, more, Vicky, you pretend and claim you’re not in control of yourself: your anger, your memories. Adults are in control of their own minds, Vicky. Grow up.

As for memories of being dismissed, etc.: you think men don’t experience all of that except perhaps the catcalls – and even that! – that’s precious. Where have you lived for 70 years? Your basement?

Good LORD, my kids have endured all of that at times, and they’re only in their twenties. Grow up, Vicky.

And, for some reason, the most chilling memory of all, the one Christine Blasey Ford called up and that we all recognized: the laughter. The laughter of men who are bonding with each other by mocking us. When Ford testified under oath that the laughter is the sharpest memory of her high school assault, every woman within the sound of her voice could hear that laughter, had heard that laughter, somewhere, somehow.

You really HAVE spent 70 years in your basement, Vicki! Sure, women never laugh at men, or at other women. It’s only men who laugh as they bond with each other by mocking other people.

Do you listen to yourself?

As for Ford’s testimony “under oath” I agree with you. Her inconsequential farrago has so many holes, that she should totally be brought up on charges for violating that oath. Oh, that’s not what you meant? My bad.

Then perhaps she should be brought up on charges for plotting to destroy someone with totally unsubstantiated nonsense.

And you – yes, you, Vicky – should be ashamed of yourself for falling for it.

No man right now understands the flood that is rushing through women’s brains, and only women in the deepest denial have evacuated their minds before the flood could reach them.

Sure, if we disagree with you, our minds are vacant. Thanks Vicky. I see your malignant narcissist self respects women as much as it respects men.

Or put it in other words: I’m in awe about how upset you are that men can’t be destroyed without proof, by unsubstantiated, crazy accusations.

You, who have a husband, and maybe sons and presumably grandchildren. Of course, the one thing you don’t have is decency. That much is obvious.

When good men like Sen. Christopher A. Coons (D-Del.) give heartfelt, sincere speeches about how we must listen to women, I don’t know whether to coo or laugh or cry or yell. Think about “listen to women” as a program for change. It says to women: You will continue to suffer these abuses, men will continue to do disgusting things to you, the storms will keep coming, the tide will continue to rise, but now, we will listen and help you rebuild.

If we could, we’d long ago have done away with rape, murder and evil. But we can’t do that. Even the most totalitarian societies the world has ever seen – say Soviet Russia or Maoist China – couldn’t prevent humans acting in ways that the government didn’t want them to.

What is your program, Vicky? Other than taking the fact that people didn’t accept a nutbar’s unsubstantiated accusations as gospel because she has a vagina as a personal insult? Other than continuing to abuse your husband on that flimsy excuse?

What is your program, Vicky, other than giving yourself a pass on being a malignant narcissist for whom other people are little more than game pieces?

Pay attention people: If we do not raise boys to walk humbly and care deeply, if we do not demand that men do more than just listen, we will all drown in the flood. And there is no patriarchal Noah to save us.

Grow the hell up, Vicky, or go straight to hell. My sons will never be told to walk humbly or care deeply for what abusers as you wish.

Individual men aren’t responsible for anything but what they, themselves do. And they don’t have to endure abuse for your imagined slights. Grow up Vicky.

I will not tell any man to humble himself before a raging narcissist. If it makes you feel better, I will not raise any grandchildren to do it either, male or female.

I will continue encouraging people of either sex to behave like decent human beings and be responsible for their emotions and actions.

I will not encourage any of my descendants, or even other people’s descendants to meekly take the abuse you dish up. These are my middle fingers, Vicky. I have a matched set.

And I will continue thinking very badly of you. And even worse of the Washington Post who could publish your farrago of nonsense without blushing.

Sarah Hoyt lives in Colorado with her husband, two sons and too many cats. She has published Darkship Thieves and 16 other novels.