CHANGING THE GEOGRAPHY OF POWER 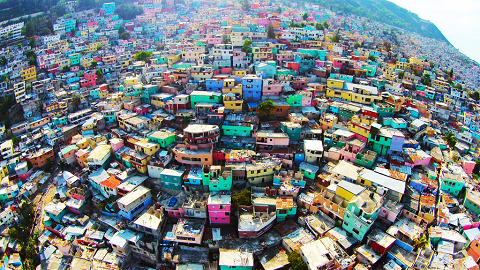 Port-au-Prince Haiti – where the UN should be relocated

It matters where the seats of power are located. Given the populist revolt in the United States and Europe against the so-called “global elite,” it is time to refigure the geography of governmental and transnational power.

Much of the international body’s perceived negatives derive from being in the world’s richest and most visible city, New York. But what if U.N. elites did not have easy access to instant television exposure, tony Manhattan digs, and who’s-who networking?

Most of the world is non-Western. Many Western elites are apologetic over past sins of imperialism and colonialism.  So why not move the United Nations to Haiti, Libya or Uganda?

The transference would do wonders for any underdeveloped country, financially, culturally or psychologically. U.N. officials without easy access to Westernized media and the high life might instead have more time to concentrate on global problems such as hunger, disease and violence — and be personally enmeshed in the dangers they address.

Given the controversy over President Trump’s supposed disparagements of such countries as bleepholes, having an underdeveloped nation host the United Nations could refute such stereotyping.

Relocating the U.N. to a capital such as Port-au-Prince, Tripoli or Kampala would prove that such places are unduly underappreciated and surprisingly wonderful cities from which to conduct international governance.

Liberals treasure the United Nations. Conservatives don’t trust its often anti-democratic and anti-American tenor. So why not split the difference by staying in the United Nations but, after 66 years of a New York headquarters, finally allowing another country a chance at hosting the U.N.?

Washington, D.C., is often considered out of touch, both politically and geographically, with the rest of America. Given Washington’s huge number of federal workers, why not disperse at least some of its agencies westward to ensure demographic diversity?

Transferring the Department of Agriculture to, say, Topeka or Fresno would allow bureaucrats far more intimacy with the farmers they regulate.

Putting the Department of the Interior in Salt Lake City would make practical sense, given that the federal government owns about half the land of 11 coterminous Western states, including Utah.

Either Houston or Bismarck would be a seemingly ideal spot for the Department of Energy. Texas and North Dakota will be at the cutting edge of new gas and oil development for generations.

Youngstown and Flint seem like perfect locales for the Department of Labor and the Department of Commerce. These Rust Belt cities in Ohio and Michigan played historic roles in America’s industrialization and are in dire need of outside investment and attention.

Such moves would also reduce Washington’s congestion and the soaring cost of living in the nation’s capital.

Moving the centers of federal power would defuse the populist rebellion by bringing the administrative state closer to those it administers — and by dousing bureaucratic fantasies with pragmatic realities.

Breaking up Washington’s monopoly on power would also diminish the leapfrogging careerism of professional Washington bureaucrats and politicians. Often, they spend their lives crisscrossing capital boulevards between jobs at bureaucracies and nearby lobbying firms.

Europe also could benefit from the same sort of decentralization. The NATO alliance is based in Brussels, Belgium. The institutional seats of the European Union are located in Brussels, Frankfurt, Luxembourg and Strasbourg.

In a geographic and demographic sense, all of these cities are fossilized relics of a bygone postwar age in which such organizations reflected their near-exclusive Northern European membership. But today, European integration extends from the Arctic Circle to Mediterranean Crete, and from the Iberian Peninsula to the Russian border.

Why not relocate the European Parliament to Warsaw or Prague to reflect current concerns with European-Russian relations and the need to solidify Eastern and Western Europe?

The Council of the European Union could be transferred to Naples, especially considering the worries over migration influxes into Southern Europe and the north/south financial controversies.

Tiny and tony Luxembourg is hardly representative of the now-diverse EU. Why not at least transfer the European Court of Justice from Luxembourg to Athens, the historic birthplace of democratic government and a city in dire need of financial help?

NATO needs the same sort of shake-up. The transatlantic alliance’s worries are now as much about radical Islam as Russia. Moving its headquarters to Chania, Crete, would give NATO officers a perch at the crossroads of three continents and offer its bureaucracy a better chance to monitor transcontinental crises.

If the purpose of the alliance is to protect Europe, it would be smart to defend the continent preemptively from its frontiers than reactively from its interior.

The elite of the Western world faces renewed political charges of hypocrisy and illegitimacy. Administrators often wax eloquently in the abstract. But rarely in the concrete do they live with those they purport to care about.

Transferring seats of power to the hoi polloi is not just practically smart but morally long overdue.