2 The Point News » Behind The Lines » Free Articles » CELEBRATING COLUMBUS

[ssba]October 12 is for celebrating the 524th anniversary of Columbus’ discovery of America, for on that day in 1492, the Great Admiral landed on Guanahani (now known as San Salvador or Watlings) island in the Bahamas. 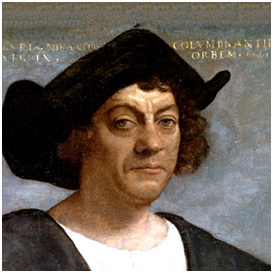 We commemorate this as a true discovery in contrast to all the claims of Vikings, Chinese, Irish, and others who supposedly came earlier – for once and only after  Columbus discovered America, it stayed discovered.

Unfortunately, Columbus Day is for most Americans just an excuse for a three-day weekend – which is why it’s a holiday today, Monday October 10.

What it should be is a commemoration and celebration of  Western Civilization – which is why the Left hates Columbus and his holiday.

So there will be the usual spectacle of American Indians using the holiday to denounce the White Man and his genocidal war-mongering culture-destroying earth-murdering imperialism, blah blah blah – with White Liberals joining in, masochistically condemning their own civilization.

If it’s your misfortune to run into any of these folk bemoaning the nightmare and tragedy of our coming here, you might suggest to them that they abandon every vestige of the civilization they hate as so evil.

Not just every material benefit – electricity, the wheel, and all post-Stone Age inventions. Every psychological vestige as well – starting with the very concept of American Indian or Native American or any other collective term for North American aboriginals.

The concept of American Indian is a modern one, not possessed by any Amerindians until they learned it from Europeans. An Indian’s pre-Columbian identity was that of his or her membership in a particular tribe such as the Kiowa or Lakota.

This is why there were no Indians in America when Columbus discovered it. There were Chippewa and Iroquois and Mohawk and Miwok and Powhatten and hundreds upon hundreds of others – but there were no Indians, because none of them possessed any sort of pan-tribal notion of common humanity and cultural identity.

That common identity they learned from us.  As a reprehensible act of cultural imperialism, the concept of “Native American” should be stricken from their vocabulary as the politically correct thing for them to do.

The multitude of tribes here were in a state of constant warfare with each other. Alliances were ephemeral and temporary. The fantastic level of violence perpetrated by pre-Columbian Amerindian tribes upon each other is documented by anthropologist Lawrence Keeley in War Before Civilization: The Myth of the Peaceful Savage.

Keeley documents with both historical and forensic evidence that European settlers were on the whole far more peaceful than Amerindians, who were far more violent.

Thus at America’s founding, it was with good reason that Thomas Jefferson listed in The Declaration of Independence as one of the “injuries and usurpations” afflicted upon the Colonies by King George III was that:

“He has endeavoured to bring on the inhabitants of our frontiers, the merciless Indian Savages whose known rule of warfare is an undistinguished destruction of all ages, sexes and conditions.”

As you savor celebrating Western Civilization today, reflect on how totally cool it is that America’s founding document tells the truth with such political incorrectness that it actually calls untouchably noble and pure “Native Americans” as “merciless Indian Savages.”

For Amerindians were certainly just as merciless and savage towards each other as they were to us.  In their state of perpetual war upon each other, victorious tribes seized control over the land of a defeated one.

The Sioux, for example, kicked out the native inhabitants of the Plains, moving there after they themselves were kicked out of Canada by other tribes. Of course, the Sioux culture of the Great Plains with the eagle feather headdresses and hunting buffalo on galloping horses romanticized in the movies, was made possible by the introduction of horses by Europeans in the first place.

So another thing the Columbus-haters would have to give up on their reservations would be horses — in addition to cars, trucks, motorcycles, bicycles and any other form of land transportation except their feet.

That larger and stronger tribes from Europe eventually conquered all Amerindian tribes and took most of their land is in no way essentially different from their own pre-Columbian history.

For all those guilt-ridden liberals who think we should give it back – ask them to what tribe are they donating their home and other property?

Ask them if they are suggesting Amerindians relinquish all products of European psychological imperialism, all Eurocentric concepts such as the earth goes around the sun, reading, writing, mathematics, physics and chemistry, and all other educational oppressions?

You can have a lot of fun posing such questions to liberal lovers of the Stone Age – and telling them to act as they preach.  For if they don’t act to abandon every vestige of the civilization they hate as so evil, they condemn themselves as bottomless hypocrites.

So tonight – most appropriately over a glass or two of Chianti, Montepulciano or other Italian red of your choice (if you prefer white, perhaps a Pinot grigio) – give thanks to the Admiral of the Sea, one of the great heroes of history, Christopher Columbus, and the blessings of Western Civilization that his discovery bestowed upon America.

Ps:  I say all of this, by the way, with my maternal 5th great-grandmother (born about 1695) a full-blood Cherokee.  And since it’s a three-day weekend, there’s time to tell you a Political Correctness Corrected Story about Columbus and how much damage Amerindians did to Europeans:

On August 3, 1492, Christopher Columbus departed the Spanish port of Palos at the mouth of the Rio Tinto.  After discovering islands he named San Salvador (in the Bahamas), Juana (Cuba), and Hispaniola on the other side of the Atlantic Ocean, he returned from his epochal voyage, reaching Palos on March 15, 1493.

According to the journal of Spanish physician Ruy Diaz de l’Isla, the pilot of Columbus’s ship had contracted a previously unknown disease marked by severe fever and frightful skin eruptions.

The pilot wasn’t the only one.  By the time Columbus reached Barcelona, several of his sailors had come down with this strange new disease and were treated by the mystified Dr. de l’Isla.  Unbeknownst to them, the sailors had acquired the disease through cohabitation with infected native women on the discovered islands.

A number of these sailors were from Naples, and upon their return, the infection spread throughout the city.  Naples was the capital of the Kingdom of Naples which controlled the entire southern half of Italy.  When the young King of France, Charles VIII (1470-1498) decided to conquer it, entering Naples with a massive army in February of 1495, the infection was rampant.

As always, the first goal of a conquering soldier is as many liaisons as possible with the local women.  This time such liaisons proved lethal.  The new disease devastated Charles’s army, which suffered a disastrous defeat at Fornovo in July.  As the French army retreated across western Europe, the disease spread in its wake.

Europe had finally begun to recover from the Black Death of the bubonic plague in the middle 1300’s, which had killed fully half of all Europeans.  Once again, Europe was ravaged by a plague now known as morbus gallicus, the French Disease.  It would kill one third of the entire population of Europe.

In 1521, Girolamo Francastoro, an Italian poet, wrote a poem about the disease, which he named after a shepherd in Greek mythology who refused to worship Apollo and was infected by the vengeful god with ulcerous sores all over his body.  The name of the shepherd was Syphilis.

Liberals have desperately searched in vain for evidence of syphilis in Europe before Columbus so as to disprove its American Indian origin.  Smallpox wiping out many American aboriginal tribes has always been for liberals the ultimate malevolent evidence of evil White Man.

Conclusive research shows however that syphilis is a New World mutation of yaws, existing among American aboriginals for many centuries before Columbus.  An American Indian disease wiped out a third of Europe, to the great embarrassment of liberals.  See Case Closed: Columbus Introduced Syphilis to Europe, Scientific American, December 2011.

And one final note.  The book to read on the devastation liberal government programs have wreaked upon American Indians is The New Trail of Tears:  How Washington Is Destroying American Indians, by Naomi Schaefer Riley.  Published just two months ago, it will break your heart over what corrupt anti-capitalist socialist welfare has done to them.