All too many bad ideas get endlessly recycled.  The carbon tax is one of them.

A carbon tax could be a tax on coal, oil and gas carbon-dioxide emissions from power plants and other sources. Do you know how much carbon dioxide is in the atmosphere? It is a little less than 400 parts per million. Do you know what the optimum level of carbon dioxide is? No one does, even though some have the extreme conceit to think they do.

The earth’s atmosphere is 78 percent nitrogen, about 21 percent oxygen, less than 1 percent argon, and only 0.038 percent carbon dioxide — plus a variable amount of water vapor, from 0% at the Poles to 4-5% in the Tropics.

CO2 is necessary for life. Plants cannot grow without it. They absorb it and release oxygen in exchange. Animals exhale it and inhale oxygen. There is evidence that as carbon-dioxide levels have risen, plants are growing faster, which means cheaper food.

When fossil fuels are burned, they produce small amounts of carbon dioxide but large amounts of water vapor. Increases in water vapor show up as more cloud cover. Clouds both trap heat (which increases warming) and reflect sunlight (which reduces warming), but there is no consensus about which effect is greater.

What is known with a high degree of certainty is that at times in the past, the Earth has been both warmer and cooler at current levels of carbon dioxide in the atmosphere.

What is also known is the current climate models have a dreadful record of prediction. Twenty years ago, we were told that the Earth’s temperatures would steadily rise from then on, yet there has been no average warming for the past 16 years.  Oops.

Let’s assume for the moment that those who think that global warming is largely caused by increases in carbon dioxide, and that man has caused the increase, are correct.

Does it make sense for the United States to impose a carbon tax, when emissions from the rest of the world — notably, India and China — would be responsible for 93 percent of the temperature rise? Even with very high taxes on carbon-dioxide emissions, the amount of warming that would be prevented is too small to measure on a 50-year time scale.

A carbon tax has real costs to the American economy. Energy prices and food prices would be higher, and virtually everything else that people consume would cost more. The results of higher prices are a lower standard of living, less economic opportunity, lower real wages and fewer jobs. All for what?

You may have noticed that people who have very strong empirical and theoretical evidence for their point of view usually do not feel a need to suppress dissent. Instead they let the strength of their own arguments and evidence persuade.

Yet, the global-warming lobby increasingly exhibits the characteristics of an intolerant religious sect, rather than objective scientists.

Rather than admitting that their climate models were flawed, many in the global-warming crowd have resorted to name-calling and active repression of those who have argued that solar activity or other phenomena might be more important than carbon dioxide in determining the earth’s temperature.

As an economist, I make no pretense to knowing what the optimum temperature of the earth ought to be and what the optimal level of carbon dioxide should be, other than to note, in general, people tend to prefer warmer over colder climates and less expensive and more plentiful food that comes from more warmth, moisture and carbon dioxide.

As an economist, though, I am prepared to make judgments as to whether a proposed tax is likely to have more benefits than costs.

Even many proponents of carbon taxes, when pressed, admit that they will have virtually no effect on global warming (even using their very doubtful assumptions). However, we do know that these proposed tax increases will have very real negative effects on people’s incomes and job opportunities.

Mankind has adapted to the gradual ups and downs in temperatures and sea levels for thousands of years – and managed to do so without freedom-destroying government mandates and oppressive taxes. The carbon tax idea should be scrapped.

NOTE from JW: With the Zero White House trying to revive the man-made climate change fraud, now is an opportune time to get your TTP Global Warming Is A Fascist Hoax T-shirt.

Bring a smile to your friends and outrage libtards with the front: 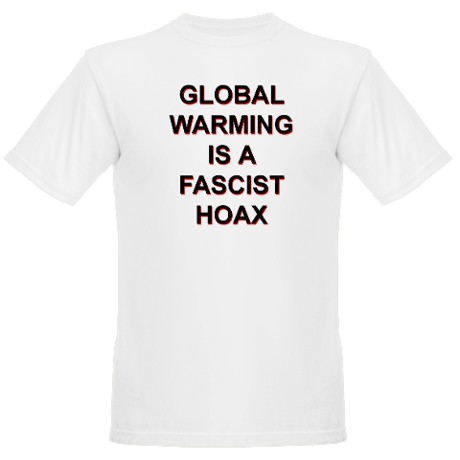 And educate them with the facts on the back:

Get yours today, and wear it with fun and pride!