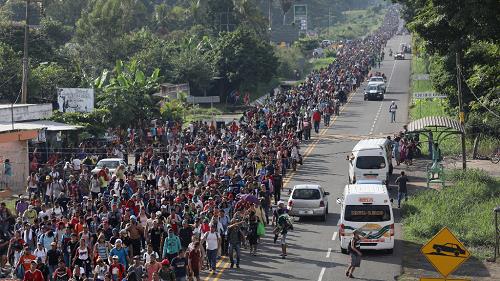 This is an Invasion, not a “caravan”

A “caravan”—the euphemism for a current invading foot-army of more than 10,000 Central Americans—of would-be border crossers has now passed deep into Mexico.

The marchers promise they will continue another 1,000 miles and more northward to the U.S. border, despite warnings from President Trump that as unauthorized immigrants they will be turned away by an armed US Military.

No one has yet explained how, or by whom or what, such a mass of humanity has been supplied, cared for, and organized.

Once at the border, the immigrants further predict that they will successfully, but illegally, enter the United States, then claim refugee status, and finally rely on sympathetic public opinion—and progressive political activism—to avoid deportation.

If past experience is any guide, they are quite right in thinking they can melt into the population, ignore future legal summonses, and count on the de facto amnesty that currently protects 22 million illegal aliens already in our country, the vast majority from Mexico and Central America.

Border crashers assume rightly that U.S. security agents and the military will not use force, on the principle that Central Americans appearing on CNN battling helmeted Americans with batons and tear gas is bad American “optics.”

But for all the staged midterm theatrics, the caravan illustrates the abject ironies and paradoxes of the entire illegal alien project.

Refugees, True and False
Central Americans claim they are “refugees,” forced out of their homes by violence and endemic lawlessness to save their very lives by migrating to the United States.

They insist on that rationale because of quirks in American law that make it more difficult to deport resident “refugees” (especially those with small children) than ordinary illegal aliens seeking improved economic conditions inside the United States.

Yet the migrants are now for the most part well inside Mexico. The Mexican government has generously offered succor. No one is threatening their lives. Mexico has even offered temporary residence for those who seem to have good grounds to be admitted as true political refugees.

In response, the caravan migrants have ignored those offers, because the vast majority are not true refugees. They are mostly no different from the millions of illegal aliens who have entered the United States for higher wages, for the chance to send remittances to their families back home, and for the generous entitlements of American social services that supplement entry-level wages and subsidize remittances.

Note: We keep ignoring that a 15 to 20 percent federal tax on all remittances sent from the U.S. to Central America and Mexico—around $60 billion a year—would fully pay for the Kate Steinle Border Wall, and provide a deterrent to caravan immigration.

To be sure, Honduras, El Salvador and Guatemala are often violent places. They have been so for centuries, both before and after the Spanish conquest.

But pause and reflect on the ensuing paradox: fury and fear over endemic lawlessness now prompts thousands to wish to break the law to enter the United States, and continue to ignore statutes by illegally residing here.

Do the migrants ever pause and wonder whether their own past and present attitude to the law in the abstract may in some small part explain why their own country in the concrete is often prone to lawlessness?

In other words, why would a host country welcome in aliens who break the law to enter it because their own former home is lawless?

Honduras or El Salvador is not an abstraction. Each nation is a collective of people who likely harbor the same general assumptions as those in the caravan—and neither will improve if its population abandons it or assumes that it can also soon break the law with exemption.

It is Orwellian to leave a nation because of its lawlessness and then, first, to enter another nation illegally, and, second, to continue to reside in contravention of the law.

What Is America to Them?
Is the United States a saintly or sinful place?

Interviews with some of the migrants reveal this ongoing irony. Most claim that they have no intention of diverting their odyssey to any other country. Only America will do.

Yet often Central American governments, the Mexican elite, would-be illegal aliens, and their sympathizers in the American progressive and identity politics movements obsess on the supposed xenophobia, the racism, the nativism, and inhospitality of the United States.

So what exactly is America—demonic or deified? Why would anyone wish to enter such an illiberal country, so different from the customs and traditions of Central America?

Would not Mexico be a much better place of refuge for the caravan people, given multiple affinities of ethnicity, language, history, and culture?

Aside from such historical illiteracy (there were few Mexican nationals in western North America even by the mid-19th-century, and those who were here were often quite hostile to non-Spanish-speaking natives), why exactly would such a strange American culture be so attractive to Central American migrants?

Apparently, it is not the fear of Honduras that drives the caravans, but instead the desire to be among foreign Americans—more specifically, to live in a society blessed with constitutional law, protections of private property, free-market capitalism, open inquiry, individual rights, religious tolerance, gender and racial equity, due process, and an independent judiciary?

And where exactly did that tradition arise that now oddly seems to work like a magnet for Latin Americans? If the United States is deemed so desirable, why could not the American paradigm be xeroxed in naturally rich, fertile, and inherently wealthy Central America and Mexico?

Assimilation, Intermarriage, and Integration
Further, the reason the United States is a nation of immigrants is not because of the enduring multiplicity of tribal affinities.

America does not work because a fifth of the population still speaks German, or immigrants from Asia create enclaves that perpetually mimic the culture of China, or because Scandinavians have somehow maintained the socialism of Sweden inside the United States.

Immigrants, the ancestors of most of us, enriched our food, music, fashion, art, and literature by importing ideas, customs and practices from their mother countries, but they do not tamper with our core that has guaranteed our success: religious and political tolerance, adherence to the U.S. Constitution, English as the official language, free-market capitalism, and individual liberty.

Thus assimilation, intermarriage, and integration, the now despised “melting pot,” for over two centuries converted immigrants into Americans. At the moment when Americans fail to continue this tradition of assimilation we will end up like the Balkans, Rwanda, Iraq, or for that matter most of the countries in Asia, Africa, and South America.

Have any of the would-be immigrants in the caravan thought much about learning English, of soon recalibrating to envision an American from Vietnam or Russia or Somalia as more one’s kindred soul than those who would soon become to them a foreign national in Central America?

Or, in the spirit of postmodernism, is the United States envisioned just as a safe, secure, and relatively prosperous enclave in which to remain Central Americans without Central America in their midst?

In other words, immigration has been historically a brutal bargain, one that demands of the immigrant not to live as he did in the past, because to do so would replicate the failures from which he was escaping.

Those in Tijuana, for example, live according to customs, protocols and laws quite different from those a few thousand yards away in San Diego, which explains why the two municipalities are themselves so different.

The melting pot forced the unwilling to accept that reality and thereby allowed the idea of e pluribus unum (out of many,one) to work and to avoid the more common and dangerous romance of ex uno plures (out of one, many – the mantra of Democrat identity politics).

The Irony of Equal Rights
A final incongruity is reciprocity.

Mexico and Central American certainly would not appreciate it if Americans acted toward their country as they do to ours, specifically to enter illegally, to reside illegally, and then to make demands upon the host.

Mexico until very recently had wacky stipulations in its constitution and immigration laws that constrained legal immigration if it endangered the demography of Mexico, its apparent cherished idea of raza.

In sum, it would be nearly impossible for an Irish-American, a Somali-American, a Vietnamese-American to emigrate to Mexico or Central America and to be considered a full-fledged citizen of the country with all the constitutional protections and cultural affinities of native-born Mexicans.

Yet Mexican and Central Americans, even when entering and residing in America illegally, naturally and understandably assume they can enjoy the same rights and be treated the same as Americans.

Is there any formal appreciation that the United States is the only country in the world where that reality is possible, where superficial appearance is no guide to Americanness?

Or more bluntly put, why is America so unlike China, Russia, or Mexico, where all immigrants from such countries can become full-fledged citizens and be treated as such, and yet few of those nations would consider an American immigrant who did not look Chinese, Russian, or Mexican to ever be considered fully a compatriot?

No doubt some in the caravan are genuine political refugees seeking their salvation in America. A few already may have applied in their home consulates for legal residence and may already be learning English and the peculiarities of the U.S. Constitution.

But that is not the image the caravan conveys.

For some reason, the caravan is a paradox, a contradiction and an irony of many thousands who are quite eager to violate U.S. law, to make claims upon their would-be host without serious reflection about why they are leaving one nation and demanding entrance into another.

That, with the full expectation that their new home has no right to demand that all would-be guests fleeing lawlessness should first abide by laws. 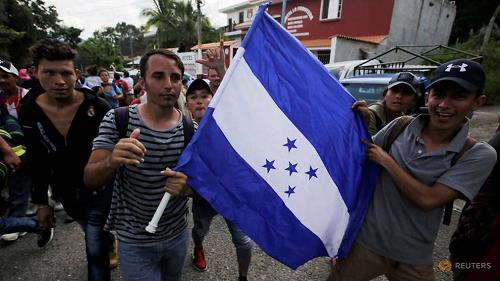