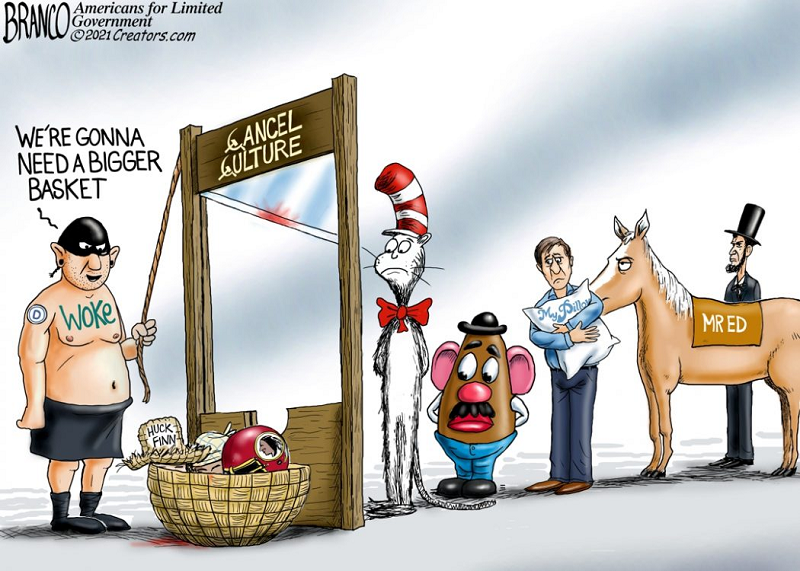 On the left, the tumbrels are rolling again, delivering former icons like Dr. Seuss, Pepe Le Pew, and other enemies of the people to the cultural guillotines for immediate beheading.

Their crimes: their decades-old sensibilities are out of touch with those of the seething, humorless and frankly not very bright scolds who currently inhabit the fever swamps of Twitter, Facebook, and the editorial pages of the New York Times.

Go ahead, laugh; what could be more ridiculous than discerning “rape culture” in the broadly drawn behavior of a French striped skunk who’s been looking for love in all the wrong places since 1945?

But ham-handed attempts at seduction are no longer funny to the Madame Defarges of the social-justice warrior brigades, and so stinky little Pepe must be banished from Looney Tunes land.

Ditto Dr. Seuss, the beloved children’s books author, who was recently slammed into the dock for depicting “racial and ethnic stereotypes” in classics such as “And to Think That I Saw It on Mulberry Street.”

His offense was not anticipating what might give offense to the looney tunes who now patrol the bloody borders of the culture wars (this from a man born in 1904 and who died 30 years ago)—so now six of his books, including “Mulberry Street” will no longer be sold, according to his literary executors. (Check the prices on Amazon on the link just above.)

On second thought, don’t laugh. If there’s one thing we’ve learned from chronicling the inimical antics of the Cultural-Marxist Left for more than half a century, there’s no idea too stupid or malignant for them to advocate and then channel into public policy.

Notions too absurd for words just a few years ago—such as allowing biological males in sports bras to compete with real women in various sports, including wrestling and boxing—are now mandated in some places.

Meanwhile, the breach of the Capitol on Jan. 6 has become an “insurrection” and supporters of former president Trump have become “far-right extremists.”

And if you object, you’re a “bigot” or a threat to “our democracy.”

For these new Bowdlers, Savonarolas, Pecksniffs, Lenins, Molotovs, and Stalins, everything about Western culture is now fair game—because its destruction has been their goal all along.

Under the cover of Herbert Marcuse’s doctrine of “repressive tolerance,” these deadly parasites embedded themselves into the universities and the media by pleading for tolerance for their transgressive opinions and ways until such time as tolerance was no longer needed.

And now, like the chestbursting critter in Ridley Scott’s 1979 science-fiction film, “Alien,” they’ve ripped through America’s moral torso and slither squealing across the floor, covered in blood and guts, and laughing their heads off.

Or, rather, biting your head off.

But these latest salvos in the culture wars are just a small front on a much larger battlefield. The essence of “progressive” tyranny is not commanding the citizenry to do something contrary to its principles and beliefs, but to do so arbitrarily, while convincing them it’s a good idea.

They do this by means of a principle I have termed the Elevation of the Particular to the General.

Thus do minority tastes, pursuits and even perversions become sympathetically mainstreamed, generally in the name of “rights,” and any opposition can be quickly marginalized as irrational fear (hence the proliferation of phantom “phobias”), prejudice, or unreasoning hostility.

The hijacking and cheapening of the civil-rights movement—which was rightfully intended to redress a monstrous historical injustice (one dating back to the Greeks and the Romans, and still practiced in some benighted parts of the globe)—is a case in point.

Once, the Selma march meant something; today, it is invoked for nearly any passing fancy involving a newly discovered “right,” no matter how fashionably transient.

But the real target of what has come to be called “cancel culture” is our nation and western civilization themselves.

Picking off kids’ books and old Warner Bros. cartoons is child’s play, something to distract you with while they go after their principal enemy—the U.S. Constitution and our entire system of republican government. What’s being canceled is you and the country you grew up in, to be replaced by something still dubbed the United States but entirely different otherwise.

This is called “progressive patriotism.”

Consider the latest monstrosity to emerge from the Democrat Party, the legislative enormity known as H.R. 1. This rude beast, already passed by Nancy Pelosi’s House and now slouching its way toward the Senate, would effectively destroy our already severely damaged electoral system and ensure that the Democrats—a criminal organization masquerading as a political party practically since Aaron Burr murdered Alexander Hamilton—would never lose another election.

It’s known as—of course!—the “For the People Act,” and among the provisions in its 791 pages of troublemaking are: mandatory voter registration for everybody, including felons; extended “early voting”; restrictions on election observers; and requiring all states to allow “ballot harvesting”; no voter ID; and the registration of 16-year-olds to vote when they turn 18. This is called “protecting the right to vote.”

As they did with Obamacare 11 years ago, Democrats are trying to press home their narrow parliamentary advantage now because they know the jig’s likely up in 2022, when they could easily lose both the house and the senate under normal electoral circumstances.

And as Joe Biden continues to visibly fade before our eyes, who knows who will actually be president in two years?

The Supreme Court shamefully refused to address the issue on several occasions during the 2020 mess, and the media can always be counted on to call the Republicans racists and bigots for wanting to restore some legitimacy to the exercise of the franchise.

So what? The key to canceling cancel culture is to just… cancel it.

As “woke” big business is learning the hard way, real Americans are fed up with bullying and virtue-signaling, disgusted by book-banning, and acutely aware that our Bill of Rights is now under the worst jeopardy since the British burned Washington in the War of 1812. And they’re ready to do something about it.

As the Lebanese-born essayist and statistician Nassim Nicholas Taleb has written, huge cultural changes are wrought by the smallest minorities:

“It suffices for an intransigent minority to reach a minutely small level, say three or four percent of the total population, for the entire population to have to submit to their preferences. Further, an optical illusion comes with the dominance of the minority: a naive observer would be under the impression that the choices and preferences are those of the majority.”

Taleb’s point is that a small number of intolerant people with a passionate commitment to their cause can command the culture; he calls this “the minority rule,” and cites Alexander the Great’s famous aphorism that it’s better to have an army of sheep led by a lion than an army of lions led by a sheep.

So the next time the Left comes for some institution, act like a lion and just say No.

Say No to wokism, No to the media robinettes, No to the platoons of captious hall monitors, Karens, and other assorted muttonheads who seek to shame you publicly for transgressions against the voices in their heads and the fillings in their teeth.

Treat them with the same respect they treat you, which is none.

In short, take it from Dr. Seuss: “Unless someone like you cares a whole awful lot. Nothing is going to get better. It’s not.”