Gretchen Carlson, chairwoman of the now-swimsuit-free Miss America, would very much like you to know that she isn’t just a pretty face. She also has a degree from Stanford and spent a year studying Virginia Woolf at Oxford.

Even so, let’s pause and ponder for a moment which  elements on her CV got the studio executives most excited when considering her for her jobs on TV.  Choose a) or b).

a) ‘Hey! She majored in “Organizational Behavior”!?! And she’ll be just great at explaining to our viewers the true significance of all that mopey, suicidal, proto-feminist stream-of-consciousness in Mrs Dalloway and To The Lighthouse!’

Well, I’m no Miss America. (You need to be seriously brainy to be one of those these days. Apparently). But if I were to hazard a wild flying guess, I’d say the clincher wasn’t Carlson’s mammoth intellect.

This being so, I’d argue that it’s mightily unfair and wrong – and frankly stupid – of Carlson to do what she has just gone and done in her role as chairwoman of Miss America: cut out the swimsuit section, the better that contestants may demonstrate the “passion, intelligence, and overall understanding of the job.”  Right.

“We are not going to judge you on your appearance because we are interested in what makes you you,” says Carlson.  “It’s what comes out of your mouths that we care about.”

These are the kind of dumb things only someone who spent a year studying Virginia Woolf would say.

First of all its objectively untrue. No sane viewer in the history of the world ever tuned into a Miss America, or Miss World or Miss Universe contest in order to ogle their opinions on how they’re planning to save the planet.

(That’s just the joke bit; the irony bit; the bit that we treat with all the seriousness and attention of the moment where the stewardess demonstrates how to fasten and unfasten our seatbelts – that’s how little we care…)

#ByeByeBikini the Miss America social media accounts are announcing, like it was a boasting matter.

The point about female beauty contests – really, the only point that matters – is that they exist so that attractive young women can compete against one another to see who is the prettiest.

Sure it’s true that, over the years – as a sop to feminism or women’s rights or the 20th century or something –  some additional nonsense has been introduced whereby the simpering poppets are required to play the violin (like Gretchen did when she won Miss America in 1989) or string two or three words together (preferably including “world” and “peace”, see video clip above) in vaguely the correct order in order to demonstrate what rounded human beings they are.

But let no one be under any illusions. It’s not the inner beauty of these girls that is being judged on these occasions. It’s their bodies and their faces that we’re all checking out, just as we have done with hot babes since time immemorial.

In historical terms, the notion that celebrating female beauty is somehow demeaning is a very very recent one.

It wasn’t because she was a minger that Helen of Troy was hailed through the centuries as the face that launched a thousand ships.

When Botticelli was looking for a model for The Birth of Venus, he didn’t go touting round though the slums to find the closest 15th century equivalent to Lena Dunham.

Only with the advent of the Social Justice Warrior and #MeToo has this embarrassment with female beauty become a thing.

It’s supposed to be empowering for women. But really, it’s nothing of the kind. In truth, like so much SJW politics, it’s a mix of socialism and spite: a way by which fatter, uglier women can remove the competitive advantage hitherto enjoyed by their more babesome peers. 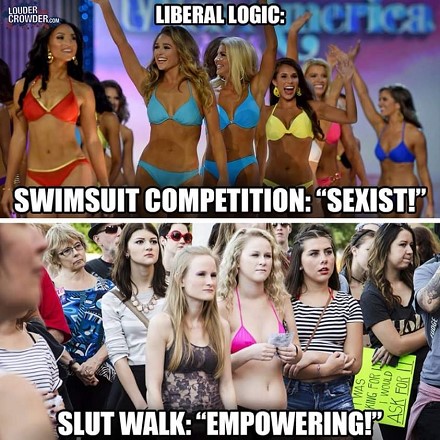 Normally, I’d hate to cite Piers Morgan in support of any argument. But this time he has got it bang on: If Miss America contestants really want to be judged on their brains and not their bodies, they should go and study neuroscience.

The howling radical feminist PC mob on both coasts will wildly celebrate this absurd decision by the Miss America Organization.

In Trump country, I suspect most people will frown in utter bemusement and say: ‘A beauty pageant that’s not about beauty? What the hell’s the point in that?’

To which the answer is: there isn’t one.

British writer James Delingpole is the author of such “fantastically entertaining” books as 365 Ways to Drive a Liberal Crazy.