BOLTON SNOOKERS BOTH RUSSIA AND CHINA 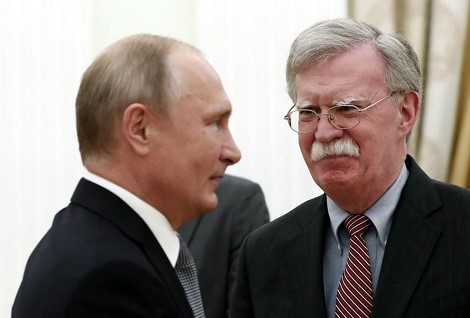 Bolton with Putin in the Kremlin

With yesterday’s announcement (10/23) by U.S. National Security Advisor John Bolton that the United States is terminating Ronald Reagan’s landmark 1987 Intermediate-Range Nuclear Forces (INF) Treaty, much analysis has focused on the impact of that decision on U.S.-Russia and U.S.-China relations.

Relatively little, however, has been said about how the INF treaty termination could impact Russia-China relations, especially in the military sphere.

Indeed, there is reason to assume that one of John Bolton’s strategic calculi in his push for a unilateral U.S. treaty withdrawal is its detrimental impact on burgeoning China-Russia military relations.

Bolton’s Snooker is a geopolitical tour de force two-fer.  Here’s how it works.

The rationale here is simple: Despite a recent uptick in military cooperation between the two countries as, for example, seen during the Vostok (Eastern) 2018 military exercise this September, Beijing and Moscow continue to eye one another with suspicion when it comes to the deployment of military assets in proximity to the Sino-Russian border.

This mistrust in particular could potentially be amplified if one side were to suddenly deploy longer-range precision-strike capabilities near the border—a move that the Russian military has reportedly time and again been contemplating to offset Chinese growing military strength in the region.

Indeed, Russia has repeatedly threatened to dump the INF treaty unless China is included in its provision given the latter’s large arsenal of conventional and nuclear-tipped land-based intermediate range cruise and ballistic missiles.

Moscow feels at a distinct military disadvantage vis-à-vis Beijing in the Far East as a result of the INF arms control agreement given that intermediate-range systems make up about 95 percent of China’s missile force.

To recap, the INF treaty bans an entire class of U.S. and Russian ground-launched ballistic and cruise missiles with ranges of 500 to 5,500 kilometers. As a result of the treaty, the Soviet Union and United States destroyed a total of 2,692 short-, medium-, and intermediate-range missiles by 1991.

It is considered to be one of history’s most effective arms control agreements.

However in 2014, the U.S. government began accusing Russia to be in violation of the treaty by testing an illegal ground-launched cruise missile, the Novator 9M729 cruise missile (NATO designation: SSC-8) rumored to have a range of around 2,000 kilometers.

There has been speculation that this SSC-8 is the ground-based version of the 3M14T or 3M14K (NATO designation: SS-N-30A), the land-attack variant of the Kalibr supersonic anti-ship cruise missile, with an estimated range estimated of up to 2,500 kilometers.

According to some reports, the SSC-8 can be fired from the road-mobile 9K720 Iskander-M (NATO reporting name SS-26 Stone) launcher. Consequently, should the SSC-8 be operationally deployed in larger numbers (according to some reports, the missile was already operationally deployed in 2017), it very easily could be attached to existing Iskander-M brigades.

While this is partially due to the enormous geographical scope of the district, a closer look at the missile systems and their geographical disposition underline that their principle purpose is to strengthen Russia’s conventional and nuclear deterrence against China.

As Guy Plopsky wrote in a 2016 analysis:

“The two Iskander-M brigades in Russia’s Far East — the 107th and 20th — are based in the Jewish Autonomous Oblast and Primorsky Krai, respectively. Both of these regions border China. The latter region also encompasses Russia’s 17 km (10.5 mile) land border with North Korea, suggesting that the primary purpose of the two far eastern brigades is containing China and responding to contingencies on the Korean Peninsula.

At the same time, the basing locations of the Eastern MD’s other two Iskander-M brigades likewise point to a focus on China; the 103rd Missile Brigade is stationed in Russia’s Republic of Buryatia, which borders Mongolia, while the newly formed 3rd Missile Brigade is based in Gorny (once known as Chita-46) in Zabaykalsky Krai — a region that borders China’s Inner Mongolia Province.”

Consequently, while the principal purpose of the SSC-8 would be to strike the U.S. ballistic missile shield components, as well as NATO air defense systems located in Europe, it nonetheless serves an important role in Asia as part of Iskander-M units (the Iskander-M ballistic missile has an estimated range of 415-500 kilometers).

In other words, an upgraded ground-launched cruise missile (GLCM) with an operational range of 2,000 kilometers attached to Iskander-M brigades in Russia’s Far East would enhance Russia’s conventional and nuclear deterrence posture vis-à-vis China.

Expanded Russian military capabilities, especially in the area of conventional and long-range long-range precision strikes, would be bound to make China uneasy and in turn would force the People’s Liberation Army (PLA) to reposition some its intermediate-range missile units away from where they could threaten military installations of the United States and its allies in Asia.

This remilitarization of the Sino-Russian border would be a clear win for Washington.

How likely is such an escalation spiral given the recent increase in Sino-Russian military cooperation? The answer to this question will depend on numerous factors including future steps by the U.S.

E.g., will the U.S. deploy GLCMs to Asia and Europe or station other additional long-range precision strike weapons systems in these regions) as well as political considerations by Chinese and Russian leaders.

As Eugene K. Chow noted in 2017, we have to be cautious not to over-interpret future moves: “[T]he military buildup in the region is the legacy of Sino-Russo tensions, Cold War military strategy and a lack of funding to build new Russian military infrastructure.”

It is important to reiterate that China and Russia have a comprehensive strategic partnership, but not a military alliance. Notably, both sides have also repeatedly stressed the non-alliance aspect of their military ties in the past.

Part of the reason for this is the continuing existence of mutual mistrust between the two neighboring countries. While not John Bolton’s top consideration, an intended consequence of his push to abandon the INF treaty looks to be an increase in Sino-Russian tensions and a slowdown in deeper military cooperation.

Franz-Stefan Gady is a Senior Fellow with the EastWest Institute.