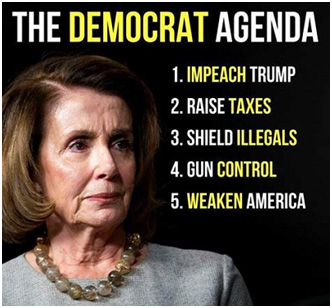 Yes, voters were stupid enough to give them the House

If we were tired of winning, we’re going to get a respite. Possibly a long one.

Here’s why you shouldn’t pay much attention to my prognostications and speculations:

I thought Republicans would gain 5 to 6 seats in the Senate, gain a governor, net, lose no more than 18, probably not more than 15 seats in the House. I was really really wrong.  November 6 was Black Tuesday.

So maybe I’m not the guy to ask what it all means, and what will happen next. But Jack Wheeler did, so here goes:

It was dismaying to lose races I thought we would win (Arizona, Nevada, Montana). Doubly dismaying to win narrowly races we should have won big (Texas a purple state?). Triply dismaying so many of the Dem candidates were such obvious dirtballs (Sinema, Tester, Gillum, Abrams.)

Even more dismaying we should do so poorly when the economy is roaring, peace with North Korea is in the offing.

Yes, the Dems have cheated their way to victory in many close races – but they shouldn’t have been close in the first place.  Have most voters – especially middle class white women in the suburbs – lost all judgment and all moral sense?

If so, we may be doomed. Blue states are bluer than ever. Red states are turning purple. There are a lot of Democrat senators from red states. There are NO Republican senators from blue states. Democrats won in Pennsylvania (big), Michigan and Wisconsin, states critical to President Trump’s victory in 2016.

Is there any silver lining to this darkening cloud?

Republicans sure weren’t popular this year. But Trump is. Here in western Pennsylvania, victorious Dems running for Congress ran ads with people who said they voted for Trump, but were voting for Dems this time.

The crowds Trump drew at rallies all over the country were not merely enormous. They were unprecedented in the history of American politics.

A disproportionate number of Republicans who bit the dust Nov. 6 were NeverTrumpers, or who were lukewarm supporters of the president.

Obviously, Trump didn’t have much in the way of coattails this year. It could be a different story two years from now, when he actually will be on the ballot.

Whether it is a different story depends a lot on whether the president is on offense or defense. That depends on:

*When Special Counsel Robert Mueller winds up his investigation, and what he says in his final report.

*When DoJ IG Michael Horowitz issues his report on FISA abuse, and what’s in it.

*Who is indicted, for what, in the wake of the IG report.

*Who is indicted in the leaks investigations, and when.

*Whether the administration takes decisive action against the mammoth vote fraud that occurred in this election.

It also matters, of course, whether the economy keeps growing, more progress toward peace is made with North Korea and the Middle East, whether the mullahs fall.

I think the Mueller investigation winds up before the end of the year, probably this month, without laying a glove on the president.

I think the same about the Horowitz report, and indictments for leaks.

I’d hoped the Horowitz report would have dropped by the end of September. After that, it would have been too late. It is against DOJ policy to drop big politics-tinged indictments just before an election, would have been too easy for Dems and the Lying Swine to dismiss the IG report as politically motivated.

By holding off until after the midterms, it will be a lot harder to dismiss Horowitz or leak indictments as politically motivated, though doubtless the Lying Swine will try.

My confidence has been shaken by the midterm results, but I remain (pretty) confident big hammers will drop in the next few weeks, because of the move the president made the day after the election.

I disagree with Jack Wheeler, and many other conservatives, about Jeff Sessions. I think he’s done an outstanding job. But Sessions had to recuse himself from Spygate investigations, because he was a target of one of them.

Trump needs an unconflicted, hard as nails prosecutor at the helm when the hammers drop. Whitaker fits the bill. I suspect this move was contemplated months ago, that Sessions was part of the planning for it, is down with it. I also think DAG Rosenstein will turn out to be a good guy.

The midterm results guarantee gridlock for the next two years. Dems lack a big enough majority in the House to pass anything really crazy, and whatever they pass will die in the Senate.

Even a two seat gain means the Senate will be able to confirm Trump’s judicial nominees. There’s a rumor Ruth Bader Ginsburg will retire next year. I’m skeptical, but a gain of two is enough of a cushion to confirm Amy Coney Barrett.

House Dems will make demands, launch investigations. But there is no more likelihood they’ll go anywhere than when Republicans controlled the House, but not the Senate or the White House, from 2011 to 2015.

The clown car show Democrats will put on probably will be a useful foil for Trump. Voters tired of it after big Dem wins in 2006 and 2008.

Voters will tire of Dems more rapidly if there are prompt indictments for leaks and corruption – another reason why I think hammers will drop before year’s end.

My confidence in the intelligence and character of the typical American voter has been badly shaken. But I still have confidence in Trump. Which is why I’m cautiously optimistic about the next two years, and the 2020 election.