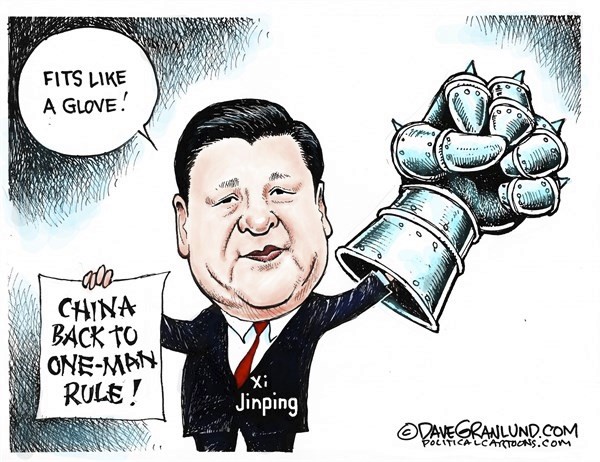 During the Lunar New Year holidays this month, political circles in Beijing were abuzz with this question: “Who, or what, are ‘black swans’ and ‘gray rhinos’?”

Noting that China’s national security and stability were under multiple threats from within and without, the “core leader” warned: “We must keep our highest alert about ‘black swan’ [i.e., unforeseen] incidents and take steps to prevent ‘gray rhino’ [i.e., known risks that are ignored] incidents.”

Xi further added that “[We are] confronted with unpredictable international developments and a complicated and sensitive external environment… Our task at hand is to maintain stability as we continue our reform and development.”

The instructions given by the paramount leader amounted to a tall order: “We must fight well with pre-emptive warfare so as to prevent and withstand risks, and at the same time fight well the war of strategic initiatives [so as] to convert danger into safety and turn threats into opportunities” (CCTV.com, January 23; People’s Daily, January 22).

“Unpredictable” International Challenges for the PRC

To what threats was Xi alluding? Given the emphasis on an “unpredictable” and “complicated” global situation, many thought that Xi was referring to the on-going trade dispute with the administration of U.S. President Donald Trump.

In the face of the aggressive tactics of Trump’s trade negotiators, the Chinese team has been obliged to make one concession after another. Thus, even before the possible striking of a deal by March 1st, Xi’s representatives have already offered to buy $1 trillion worth of American goods and to cut tariffs on imports of American automobiles.

During his recent trip to Washington, Vice-Premier Liu He further signaled Beijing’s willingness to purchase an additional 5 million tons of soybeans in the near future. At a meeting with Trump in the White House on February 1st, this key economic adviser to Xi even made a glaring mistake by saying that China would buy 5 million tons of soybeans “per day” (Ming Pao [Hong Kong], February 2; Radio Free Asia, February 1).  Oops.

The Chinese leadership has also been shocked by an alarming series of events on the global scene. The Trump administration has been able to further synchronize the China-related policies of its allies in Europe, Asia and Australia-New Zealand.

This is evidenced by the number of countries that have followed Washington’s advice not to use Huawei equipment, or which have drastically reduced business dealings with the company in the wake of Washington’s accusations of large-scale espionage (CNN, February 12; The Associated Press, February 11).

More countries have also joined the United States, Australia, and New Zealand in alleging that the PRC state-security apparatus has enhanced spying activities within their borders. Countries that have recently made charges of Chinese espionage have included Norway, Germany, Lithuania and Poland.

The latter two nations used to be considered especially friendly to the PRC, due to trade and investment benefits emanating from the Asian giant (Reuters, February 7; The Baltic Times, February 5).

However, Lithuania’s government recently identified PRC intelligence as a threat, and Poland has taken steps to distance itself from the PRC and align more closely with Washington (Eurasia Daily Monitor, February 19; China Brief, February 15).

Additionally, the United States and allied countries such as the United Kingdom and Australia have also beefed up “freedom of navigation” trips by naval vessels and jet fighters close to military bases that the People’s Liberation Army (PLA) has established on several South China Sea islets whose sovereignty is disputed by neighboring ASEAN countries (VOA, January 9; Oriental Daily (Hong Kong), October 3, 2018).

All of this contributes to a sense among the CCP leadership that China faces a hostile international environment. However, while these events negatively impact Chinese security and developmental interests, they could hardly count as either “black swan” or “gray rhino” incidents.

They are more like elephants in the room, which have elicited the attention of Beijing’s security experts for several years or more. A policy of containment directed against China – supposedly spearheaded by Washington and followed by American allies – has been a consistent theme of Washington’s foreign policy at least since the George W. Bush administration.  The difference now is that the Trump administration has turned that theme into reality.

“Black Swans” and “Gray Rhinos” on the Homefront

The true meaning behind Xi’s warning about “black swans” and “gray rhinos” is found in China’s own domestic affairs.

However, Xi and his top aides are also increasingly focused on political and ideological risks—particularly destabilization resulting from dissatisfaction with the “core leader” and his increasingly pronounced embrace of Maoism (China Brief, December 4, 2018).

Xi, who last year changed the PRC Constitution to enable himself to rule for life, is scared about threats to his own authority. As well-known political commentator Li Datong has pointed out, regime security is an obsession for Xi: “They [Xi and his cronies]  see the risks of rebellion… as the economy becomes worse, people from all walks of the society can become opponents [of the administration]” (Guardian, January 22).

Evidence that the dangers worrying Xi originate from within China can be found in Xi’s January 21st speech, in which he said that the CCP faced “seven major risks, including [factors relating to] politics, ideology, economics, technology, society, the external environment and party construction” (Gov.cn, January 21).

Xi’s paranoia about the subversive impact of dissident intellectuals, NGO activists, and house church members was also demonstrated by the fact that four days after his CPS speech he held a Politburo “study session” on the premises of the People’s Daily.

Xi, who heads the CCP’s Central Commission on Cyberspace Affairs, said the party must tighten control over the Internet, which has become perhaps the most potent weapon of the regime’s opponents. He called upon ideological and media cadres to ensure that “all the people must be tightly united by [the correct] ideals, beliefs, values, concepts, and moral principles” (China News Service, January 26, Xinhua, January 25).

Xia further asserted that “Many forces in and out of China are using the Net to nurture sympathizers of their value systems, and even opponents and subverters of the current administration” (V.China.com.cn, January 27).

That is why the CCP leadership held an extraordinarily large number of meetings in January geared toward warning cadres—especially those in charge of internal security, ideology and propaganda departments—not to lower their guard. For example, on January 16th Xi convened a national meeting on the subject of reinforcing the zhengfa (“political and legal”) apparatus.

Officials working in local police forces, the Ministry of Public Security, Ministry of State Security, the Supreme People’s Court, and the Supreme People’s Procuratorate have all been tasked to “be brave in shouldering responsibilities, keen in reform and innovation [so as] to do well the job of safeguarding the nation’s political security, and protecting the stability of the overall social [situation]” (People’s Daily, January 16; Xinhua, January 15).

Xi’s foremost fear seems to be a qualitative mutation in the nature of popular resistance to the authoritarian regime he leads—a shift that could pave the way for a “black swan” occurrence.

The president’s concerns were revealed in a meeting of senior national and regional police officers convened on January 24th by Politburo member Zhao Kezhi, who doubles as Minister of Public Security and Head of the Central Political-Legal Commission.

While this conference of top cops was largely called to follow up on instructions given by Xi in the zhengfa conference nine days earlier, Zhao revealed the depth of anxiety among the top leadership over the possible break-out of a “color revolution” (yanse geming, 颜色革命).

This term refers to the series of pro-democracy “revolutions” that took place in the mid-2000s in former Soviet states (including Georgia, Ukraine, and Kyrgyzstan), as well as the Arab Spring of the early 2010s. The standard CCP interpretation is that these cataclysmic developments occurred due to the collusion of pro-Western dissident forces in these countries with American “ideological infiltration” and material assistance (Qstheory.cn, January 17, 2016;  Xinhua, October 10, 2015).

While there have been repeated references in the official PRC media throughout the past decade to the specter of a color revolution, this is the first time since Xi came to power in 2012 that the possible demise of the CCP regime via a yanse geming has been raised at the highest level.

In response to Xi’s demand that police officials raise their wariness even against unlikely eventualities, Zhao noted at the conference that “the entire wisdom and the entire power of the police must be focused on preventing and countering ‘color revolutions’.”

He further added that “We must fight well the battle of managing public safety… We must resolutely fight well the overall battle of the fangkong [“prevention and control”] of social [upheavals]” (MPS.gov.cn, January 15).

Seeking to Strengthen Loyalty to the “Core” of the CCP

As with other battle cries issued by Xi, the aspiring president for life has not offered clear solutions for the social, political and economic problems facing the nation.

As veteran historian Zhang Lifan has pointed out, “[statistical] curves relating to politics, economics and social sentiments have reached the breaking point.” However, it is also not accidental that Xi’s admonition to CCP cadres to uphold stability has been linked together with a demand of utmost loyalty to Xi himself.

As Zhang has further noted, “On the one hand, the Communist Party’s sense of crisis has increased due to force of circumstances… On the other hand, Xi Jinping has taken advantage of the crisis to continue to boost his own power” (Radio Free Asia, January 23).

Moreover, Xi instructed, party members must “self-consciously remain at the highest level of unity with the party zhongyang [i.e., central authorities] in their thoughts, politics and action” (People’s Daily, January 22). As Xi has declared himself to be the “core” of the party, professing fealty to the core and the zhongyang actually means declaring undying loyalty to Xi himself.

As though Xi’s unchallenged power was not already evident to all, in a January 25th meeting the Politburo approved three regulations on “party construction,” whose themes again relate to strengthening the decision-making authority of the zhongyang.

For example, the “Regulations on Seeking Permission and Filing Reports on Major Issues of the CCP” simply means that no new policies can be conceived or implemented without Xi’s imprimatur (Xinhua, January 25).

As police chief Zhao Kezhi made it clear at the national meeting of top law-enforcement officers, “we must ceaselessly strengthen our loyalty to the core…and remain at a high level of unity with the party zhongyang with comrade Xi Jinping as its core” (MPS.gov.cn, January 15).

As the world watches with anxiety the unfolding series of crises shaking up China, more questions are being asked as to whether simply enhancing loyalty to the top leadership will effectively solve the country’s problems. As long as these problems persist, Xi and other leaders in the CCP’s top echelons will continue to watch nervously for the potential emergence of those mysterious and frightening beasts known as “black swans” and “gray rhinos.”

Dr. Willy Wo-Lap Lam is Adjunct Professor at the Center for China Studies, the History Department and the Program of Master’s in Global Political Economy at the Chinese University of Hong Kong. He is the author of five books on China, including “Chinese Politics in the Era of Xi Jinping”.