Lawrence Williams, the African-American owner of Tasty Treats Bakery™ near Marietta, Georgia, has found himself in legal trouble for refusing to bake a cake for two homosexual customers.

“It’s not only against my religious convictions,” said Williams, “but I can’t bring myself to bake a Ku Klux Klan-themed cake festooned with Confederate flags. I told them firmly, but respectfully, that I couldn’t serve them, but that they should be able to find another bakery in the area that would.”

However, that answer wasn’t good enough for homosexual Confederate Civil War reenactors Chester McElroy and Delmont Elkins. “I can’t tell you how hurt we was,” lamented Chester. “All we wanted was a cake to celebrate General Forrest’s birthday comin’ up next week, and he done turned us down flat.”

“It was gonna be a real beauty of a cake, too,” added Delmont. “We was lookin’ forward to celebratin’ the birthday of the founder of the KKK with a white cone-shaped cake an’ tiny Confederate flags all over it, but now that ain’t happenin’. Chester here even got the wood at Home Deppo fer the cross burnin’.” Chester nodded while restraining tears.

When asked why not find another bakery or even make their own cake, Delmont answered, “We has got to make a case fer tolerance here. If Mr. Williams is servin’ the public, well, he needs to make us our cake, simple as that. Besides, I can’t tell you how much we been suffrin’ what with ‘motional trauma an’ anxiety an’ all.”

“We been suffrin’ from loss of appetite an’ weight gain,” interjected Chester. “Looky here, I’m down to just two chins now, and you know that ain’t nothin’ but skin and bones fer a reenactor. Some of the other fellers in my unit been commentin’ on it, too.” Delmont pointed out that he had gained 40 pounds since the incident of last week, and now weighed in at 310 pounds for his 5′ 9″ frame, a weight alarming even for a Civil War reenactor.

When McElroy and Elkins were informed that Mr. Williams had a great-grandfather who was lynched by the Klan, they were ready with a defense. “That’s all lies!” rejoined McElroy hotly, “Everbuddy knows the Klan wasn’t doin’ nothin’ but goin’ house to house makin’ sure husbands wasn’t beatin’ their wives. If there was a Klan today, Delmont wouln’t’ve gimme this here black eye.”

“Well you had it comin’,” said Elkins. “I was jest checkin’ out another reenactor, same as you do,” answered McElroy. “You dern fool!” answered Elkins, “You was makin’ eyes at a Yankee! Don’t Sixth Ohio mean nothin’ to you?” “How would I know? I wasn’t home skooed,” replied McElroy in defense.

With the court deciding for the homosexual couple, fines and legal fees have forced Mr. Williams, whose wife is expecting twins, to shut down his bakery that formerly employed five other full-time workers.

“It’s the price you pay for tolerance in this country,” commented Elkins, “That’s what makes ‘Murica a free country, an’ it serves him right for what he done to us.” Here are Chester and Delmont, happy with the decision. 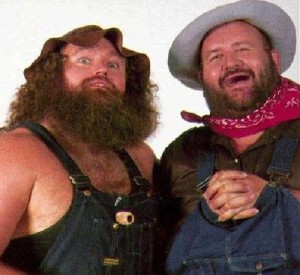