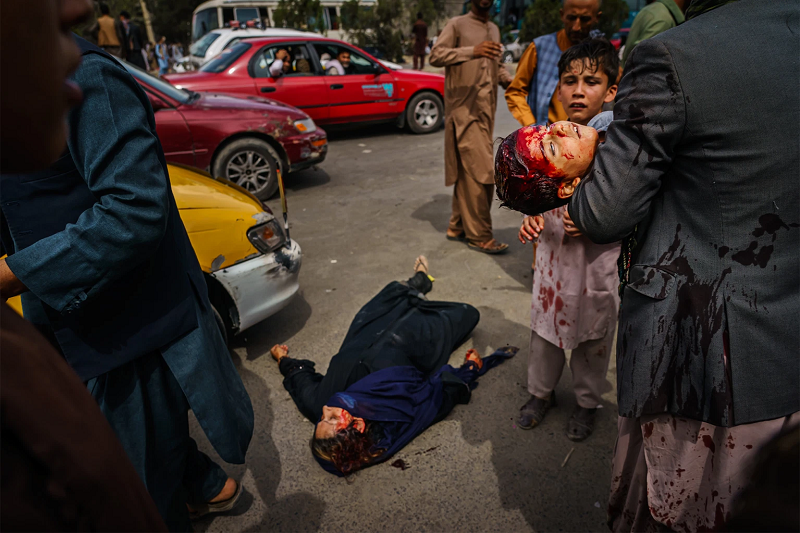 Women killed, children beat up by Taliban in Kabul (8/17)

During his speech Monday  (8/16) Joe Biden angrily blamed everyone else for the collapse in Afghanistan, including his predecessor, President Donald Trump, saying that he had to comply with the deal Trump had worked out.

But Politico has a great story today (8/18) that completely blows all this apart.

Of course, Politico is Leftie so ignore the excuses. The story basically indicates that this debacle was intentional — that Biden always intended withdrawal, nothing to do with Trump, and to heck with our allies.

It noted on the Afghanistan pullout, for example, Biden overruled his top military advisers and ignored the near-unanimous view of the Washington foreign policy establishment.

“It wasn’t a new position. While Biden championed nation building in Afghanistan in the early years of the war, he had turned against it long ago, as George Packer reported in The Atlantic earlier this year:

‘By the time Biden became vice president in 2009, the disastrous war in Iraq, the endemic corruption of the Afghan government, and the return of the Taliban had made him a deep skeptic of the American commitment. He became the Obama administration’s strongest voice for getting out of Afghanistan.’

In 2010, Biden told Richard Holbrooke, Obama’s special representative for Afghanistan and Pakistan, that the U.S. had to leave Afghanistan regardless of the consequences for women or anyone else. According to Holbrooke’s diary, when he asked about American obligations to Afghans like the girl in the Kabul school, Biden replied with a history lesson from the final U.S. withdrawal from Southeast Asia in 1973: ‘F*** that, we don’t have to worry about that. We did it in Vietnam, Nixon and Kissinger got away with it’.”

Incredible. So he wanted to get out for years, and he believed he would be able to just pull out in a blind withdrawal without reckoning for the allies. Just as, in fact, he did, in the disaster we’ve been witnessing. He just thought he could get away with it, as he told Holbrooke, because, in his opinion, others had in the past.

Now, it makes sense why he ignored Afghan pleas for months, why he left any real actions to the last minute. Because he just couldn’t give a damn and it was always in his calculus to leave them high and dry.

He pulled out without a real plan because he never had a plan. The plan was to just pull out and abandon them.

Now he’s mad that he was wrong yet again, mad that we actually care and are demanding answers, mad that he does in fact have to account for people being slaughtered by Taliban butchers.

And what about the thousands of your/our fellow Americans stranded and scattered all over Afghanistan?

It’s one thing to know Joe Biden is a corrupt moronic dirtbag.  It’s quite another to know he perpetrated this evil horror on purpose.

Nick Arama is an investigative journalist for RealClearPolitics, Red State, and other conservative outlets.