BIDEN THE GREAT AND POWERFUL

Media bias is not new.

Nothing is new to the media’s fusion and collusion with the “progressive party.”

Yet never in American history have mainstream journalists not merely promoted a candidate but actively fused with his political candidacy to the point of warping, fabricating, and Trotskyizing the news and indeed history itself.

The trope of a vast charade to create an illusionary powerful figure out of nothing is an old one in fiction, Hollywood and television. We remember “The Great and Powerful” Wizard of Oz fakery, a formidable screen image created backstage by gears and levers operated by a tiny man “behind the curtain.”

But reality has outdone movie-making with the Biden campaign. The concoction is holistic, from the mundane construction of a fantasy, on-the-go candidate to the supposed middle-of-the road old Joe Biden from Scranton radiating an aura of kindness and moderation in times of plague, panic, and protest.

For six months, Biden has run a Zoom campaign on the pretext of mandatory quarantines—our current version of a 19th-century, stationary presidential candidate, who campaigned by spitting out wit and wisdom while immovable on his front porch.

Biden has conducted no free-wheeling, unscripted press conferences. He will not do extended one-on-one interviews with a disinterested journalist. He rarely will even try Trump-like cameo appearances on CNN or MSNBC to answer unscripted questions from supporters.

His press events instead are Orwellian, requiring a media mass suspension of disbelief.

The questions are canned. They are submitted in advance by “journalists,” whether formally or via electronic chatter. The inquiries are obsequious—seldom a word about Hunter Biden, China, Biden’s troubling racist remarks, his handsy past, his scary cognitive lapses, or his “contract” with Senator Bernie Sanders (I-Vt.) and Representative Alexandria Ocasio-Cortez (D-N.Y.).

Instead the softball, known-in-advance inquiries are in spirit carried over from the Obama years, phrased in the manner of “Were you outraged enough by Trump’s outrage?”

Biden’s Oz functionaries seemingly are always experimenting with all sorts of screen props. The trick is to discover how best their challenged candidate can square the circle of completing sentences and remaining semi-coherent, while not giving away the game that his illusionists are feeding him answers to synthetic questions.

When asked point-blank on Fox News by Brett Baier whether Biden used a stealth teleprompter, his national press flak, T.J. Ducklo would not answer with a simple yes or no. Instead, he went on the attack, with the fossilized accusation that right-wing Fox News asks too many partisan questions.

So we were left with a de facto “yes”: Biden does read off a stealthy teleprompter when answering canned press questions—and gives the impression he does not.

But Biden, like the mirage of the Wizard of Oz, nonetheless can’t always keep the curtain closed.

When he strains to see the teleprompter that sits just behind, and thus out of sight of, his camera lens, he slips and mutters “bring it closer”—reminding any who watch, except the media that helps collude in these orchestrations, that the question asked is not a serious one, but a prompt to facilitate the proper nonspontaneous response.

Yet even then Biden cannot act out the part without someone either giving him the prewritten answer on the teleprompter or writing it out for him in real-time. Sometimes if Biden is not reading a hidden teleprompter script, he looks down in panic for notes or his smartphone instructions in ways that only expose the sheer ridiculousness of this faux media-staged event.

Sometimes he shows off family pictures on screen that seemingly inadvertently reflect and expose the ghostly presence of a teleprompter’s reflection in the background. 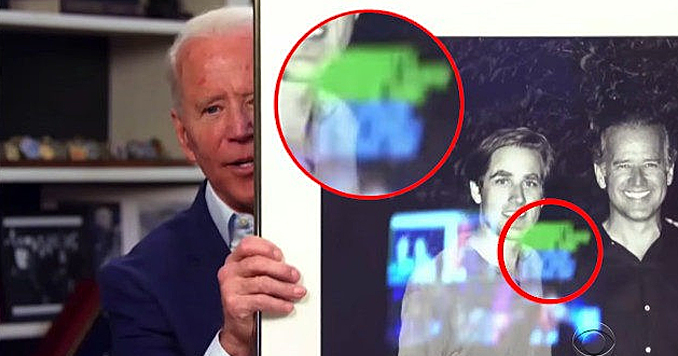 On other occasions when speaking, Biden searches in vain for his “schedule” and asks handlers to fetch it, whatever that exactly means.

In a presidential campaign first, Biden even reads out the written directives of his controllers as if to say “I’m not really saying this myself, but so what?”

So not surprisingly, during one of these sessions, out came a reference to his script’s talking point “topline” headings. When faking impromptu answers, Biden bumps into and voices his handlers’ notation of “end of quotation.”

Occasionally a “citizen” questioner sort of rebels from the media Borg and asks an unapproved question (e.g. “I’m just going to be honest Mr. Biden, I was told to go off this paper, but I can’t. We need the truth and I am a part of the truth”).

In reaction, Biden’s handlers and fact-checkers rush to assure the public that the approved question was written by the questioner’s sympathetic organization rather than from Team Biden itself—as if we are supposed to believe the campaign had no idea what its own surrogates would ask.

Sometimes the effort is scary. When old photos reappear in a CNN puff piece about a younger Biden holding his young son at a long-ago Washington Redskins game, the team logo—the now-politically incorrect Redskins logo—is airbrushed from his son’s stocking cap. And then presto, legions of “disinterested” “fact-checkers” in the media emerge to confess that Biden, not CNN, supplied the doctored image.

But, in turn, the Biden campaign assures the press that the doctoring was only for “copyright” reasons, as if candidates routinely photoshop out all the cap logos they wear. The impression is that Biden is terrified that his new leftist friends in the Ministry of Truth are combing his past and ordering embarrassing moments to go down the memory hole.

As a general rule, the Soviet-style apologia for the media-Biden fusion—usually outsourced to a now utterly corrupt left-wing institution called “fact-checking”—only solidifies the fact that the media and the Biden campaign are indistinguishable.

In Soviet times, one easily just assumed the opposite from Moscow’s party-line efforts and, presto, stumbled onto the truth.

In the case of Biden’s optics and press conferences and appearances, we easily deduce that the downside of scripting and programming a compliant candidate far outweighs the existential risk of turning Biden loose to answer questions like a normal human being.

True, even before his cognitive decline, Biden was known in Washington as someone whose incoherent and impromptu loquaciousness usually embarrassed his friends more than hurt his enemies—in addition to his long history of plagiarism and inflating his thin résumés with false data about his past.

But with the onset of his cognitive decline, Biden’s own once-feeble social antennae are now more or less unplugged most of the day.

The result is that he has a creepy propensity to blurt out patently racist tropes as if the old inner Biden who talked of Obama as “clean” and the first “articulate” black presidential candidate, and pandered to his working-class Democrat supporters with references to the inner-city “jungle,” is now free of his harnesses, bits, and halters.

For some time, Biden unchained has shouted about “you ain’t black,” and, earlier, his Corn Pop series of inflated tales as Biden, the white knight, equipped with a chain no less, protecting the inner city from itself.

Biden showed his tough-guy mettle with putdowns of a transitorily noncompliant black journalist and sneered that he is comparable to a “junkie” and drug addict. To a liberated Biden, Blacks just don’t think independently like Latinos.

Given all that, the decision of his campaign and their media stand-ins to reinsert Biden into his safe space, wheel him out for scripted occasions, and pray at least that he can follow either the teleprompter, his iPhone, or written notes in his lap, or remember his cues—without including the prompts themselves—seems understandable.

This was all known to Democrat primary voters who initially wanted little to do with Biden. The narratives advanced by primary rivals Kamala Harris and Corey Booker implied that he was either a virtual racist or cognitively challenged or both—insinuations the left-wing media was willing to fuel, in the heydays of a preferable Berrnie Sanders, Elizbeth Warren, or Beto O’Rourke prairie fire candidacy.

All that media fantasy imploded when would-be savior Michael Bloomberg proved little more than a billionaire bore and Elizabeth Warren and Bernie Sanders cranky and shrill socialist septuagenarians with even scarier agendas.  And the less said about Beto the better.

So the lightweight Biden was reflated as a sort of centrist hot air balloon to be used to float the Hard-Left basket carriage beneath across the election defining line.

But fusion/collusion is not just a matter of a Potemkin veneer. Biden’s agenda is a fantasy creation. His role was to save the party from Sanders, win suburbanites, and pander to the party’s socialist sympathizers of Antifa and the Black Lives Matter movement. That is an impossible task because today’s Democrat Party is a conglomeration of squabbling tribes and looney agendas.

The rioting, Biden insists, is due to police brutality but not due to it entirely. Trump’s COVID policies killed thousands, but Biden’s own bromides are either identical or would be less effective.

And on and on, as Biden is made to wink and nod to the Left that his only role is to get them elected before collapsing at the finishing line.

The media thinks this will work, and so owns the project. Biden will stay sequestered, visit a key state occasionally, pop out of the plane to say he is “barnstorming” Michigan or Wisconsin and then fly back into his Biden bunker for more Zoom puff interviews—and hope progressive polls show that he can endure weekly bleeding until November 3.

Every four or five days the media will blast the airways with, “Trump is ripping out mailboxes,” “Trump won’t concede and will have to be forcibly removed,” “Trump insulted our war dead as ‘losers’ and ‘suckers’ as he hid from the rain to keep his hair dry.”

Most recently Bob Woodward’s book queued up for its turn of 72 hours of smears, right after gab-bag Jeffery Goldberg’s anonymous sources faded out.

Will this joint project of progressive ideologues of the Democrat Party and the major media work?

So far the rope-a-dope has succeeded in slowing down somewhat the pace of the erosion of Biden’s lead. And Biden as the tough-talking Wizard projection will continue until, when, or if the polls show an undeniable Trump surge ahead.

For now Biden’s best hope is that some Emerald City media lackey does not play the role of the tiny dog Toto, rip away the curtain, and reveal the tiny man and his machinery behind the projection.