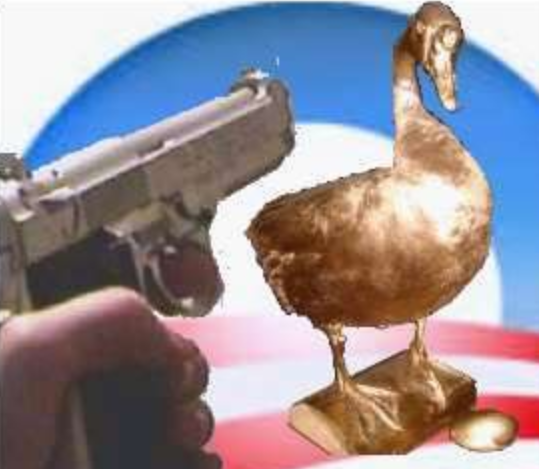 The Pavlovian “Trump did it!” sums up Joe Biden’s fallback excuse when faced with any embarrassment and failure.

His own completely optional, self-created, illegal immigration disaster? Trump somehow caused it, despite leaving office with a stable and secure border.

Vaccination rates soaring? There would be even more if not for Trump’s mere 1-million-a-day vaccination rate, mere weeks after the rollout of the “experimental” vaccinations that supposedly would take “years” to develop.

Chinese aggressiveness? Trump’s provocations again due to all his paranoid talk of travel bans, and a lab-escaped virus.

European unwillingness to confront the Chinese? Yep, Trump’s the cause again, with jawboning our friends into paying $100 million more for their own defense.

In truth, Trump’s atmospherics were chaotic, but not just due to his incessant tweeting and candid ad hoc outbursts—or even media hatred that led to 90 percent negative coverage by the networks, newspapers, and online social media.

(Notice how few, Left or Right, use any more the adjective “left-wing” or “liberal,” since to do so is a redundancy: “the media” is now accepted as a synonym for “left-wing media.”)

Instead, what enraged the elite was Trump’s unapologetic effort to fire up the economy to benefit Americans through massive deregulation, tax reform and reduction, encouragement of returning investment to the United States, and expansion of energy production, exploration, and delivery.

The result was that on the eve of the pandemic, there was a trifecta of record-low minority unemployment and near-record peacetime low unemployment, record energy production, and strong GDP growth.

Why Didn’t a Plagiarist Plagiarize?

All the newly inaugurated Biden had to do—as the pre-COVID-19 economic engine begins to kick back in and as the virus slowly begins to wane—was to claim-jump Trump’s work as the “Biden recovery.” He could have tinkered around the edges of the soaring recovery with the usual progressive social welfare verbal boilerplate.

To the degree we are now on the verge of a boom resulting from pent-up demand, it is largely because the fumes of the Trump policy have not been blown away yet by the impending Biden storm of regulations, and planned tax hikes.

Biden claimed he was a “uniter.” So with a 50-50 Senate, a tiny majority in the House, and coming off a contested, bitter election, Biden simply could have conceded that he had no mandate for anything like Franklin D. Roosevelt’s 100-day revolution.

Yet he could not just let events take their course—even if to his obvious own benefit. Instead of letting Trump’s Aesopian golden goose continue to lay its golden eggs for Biden, Biden is cutting the mother bird open—and so will find inside no more freely gifted gold.

A year-long demand is being unleashed at once as quarantines erode. People are breaking out of their isolation. They want to buy, travel, and have fun. The surge is accelerated by the “funny-money” Trump stimulus of 2020, now augmented by a funnier Biden $2 trillion cash infusion.

The result is that we are creating a climate of profligate consumer spending, albeit one reliant on massive public deficits and soaring national debt—and supposedly near-permanent, de facto zero interest rates.

But ancient and immutable laws advise caution: when real interest does not really exist, when the money supply soars, when production is overregulated and taxed and soon cannot keep up with spiraling credit-fueled demand, inflation returns—and with it an eventual stagflation of a slowed-down economy with high interest and soaring prices.

Most of the country remembers neither the stagflation of the Ford-Carter years nor what caused the real estate bubble collapse of 2008.

But one commonality was the ease of buying on credit what one could not afford, but was deemed affordable by supposedly permanently low interest rates—along with government intervention in the economy to hyperregulate banking and commerce, and choose economic winners and losers.

Already in once-stagnant places like California’s Central Valley, the prices of homes are sky-rocketing. Gas has gone up over $1 a gallon more since the election and approaches $4.

Tens of thousands of Californians are buying on easy credit high-priced cars and luxury trucks—with near-zero down payments, zero-interest loan incentives, at or above astronomical sticker prices. Container ships off Los Angeles harbor are lined up waiting for a berth, as the rapacious appetites of Americans for consumer goods has outpaced the ability to satiate them.

Fresno, of all places, is now the nation’s hottest real estate market. I talked last month to a large pickup dealer in the area. His “challenge” is not finding entry-level and mid-level trucks for his supposedly unstimulated buyers, but top-of-the-line, luxury trucks for those who either are flush with cash, or eager to go into huge zero-interest debt.

In one of the nation’s supposedly most depressed areas, buyers seem to prefer zero-interest-financed $75-80,000 to $55,000 trucks.

The New Chaos Is Calm, the Old Calm Was Chaos?

The last thing this emerging economy needs is trillions more in money-printing, especially for infrastructure spending that is more about race, class, gender, and climate therapeutics.

Ditto the analogous paradigm on the border. Trump’s immigration security efforts for three years were tied up in court. They were filibustered. His own administration’s cabinet secretaries and administrative state clerks often ignored or stymied his efforts to build the southern border wall.

Yet by January 2020, illegal immigration was in decline. Mexico and Central American governments were helping to curtail their exoduses. The border was relatively quiet—with 450 miles of new or rebuilt walls, on a steady trajectory for hundreds of more miles still.

All Biden had to do was to enjoy the hard-won respite and claim that he solved the once-raucous border crisis, replace Trump’s coarse Manhattanese with his “old Joe from Scranton” therapeutic lingo, and bask in his accustomed appropriated achievement.

Biden even might have insidiously kept the immigration stream partially open to meet his party’s grand design to recalibrate U.S. demographics, but at rates that remained under the radar and without the current catastrophic optics. But, again, he strangled the Trump goose and found its innards suddenly barren.

Joe Biden inherited the foundations for the world’s most ambitious and efficient vaccination development program. No other country had subsidized, partnered, and took risks on Moderna, Pfizer, Johnson & Johnson, and Novavax vaccinations—and paid top dollar to ensure supplies.

The result of such a bold gamble was that 1.5 million Americans were being vaccinated on the single day when Biden took office with a planned pathway to 2-3 million more per day—after two of the four vaccines were rushed into production within 10 months, all safer or more efficacious than anything in the EU, China, or Russia.

All Biden had to do was to announce “a Biden acceleration” of this inheritance. Instead, he trashed his predecessor, lying there were no vaccinations when he took office (Biden did a photo-op being vaccinated on December 21, a full month before assuming office), and instructed those likely to be reluctant to be vaccinated that masks and social distancing would be required of the immunized, anyway.

And all of this came after unnecessary delays in woke states and counties that sought to politically weaponize the order of vaccinations, instead of focusing on all people over 65, who were the most vulnerable to the virus.

In foreign affairs, the script is similar. The Trump-Pompeo Middle East breakthroughs had isolated an eroding Iran, brought not just peace but an alliance between Israel and several of its former Arab enemies, and quietly transcended the traditional Palestinian veto over the foreign policy decisions of 425 million other Arabs in 22 nations.

All Biden had to do was to pay lip service to “seeking a constructive relationship with Iran” and then put the Middle East on an auto-piloted continued trajectory.

Instead, Biden is now eager to return to the pro-Persian-Shiite tilt, apparently in unhinged notions of either “balancing” the Likud Party and its Arab Gulf right-wing allies, or in a social welfare sense, empowering the supposedly marginalized “other” of the wider Middle East.

Ditto new American policies toward China, U.S.-NATO relations, and North Korea. Pre-COVID, China was frustrated that the United States seemed to think it needed China less than China needed America, North Korea was relatively quiet. NATO countries had contributed a new $100 billion of their long-overdue contributions to their own defense.

The truth is that Trump’s policies at home and abroad were neither neoconservative and interventionist nation-building nor RINO Republican country-club economics, but instead realist abroad and populist at home. More importantly, Trump’s record was not so much ideological as practical, and led not to chaos but to achievement. Biden is daily discarding that gift and blaming Trump for his own growing self-created miseries.

In a cultural and political sense, Trump was also Biden’s best friend. Biden in 2020 never really had to campaign. He was a bystander as the media weaponized a Trump referendum. Biden simply holed up in his virtual basement headquarters of a virtual campaign.

As a result, Biden offered no detailed alternatives to Trump’s domestic or foreign policy. He kept largely mum about his own newly acquired socialist fantasies. Biden instead demonized Trump the tweeter, Trump the press-conference brawler, and Trump the hirer of Omarosa, Steve Bannon, and the Mooch—while his surrogates fanned the dissipating fumes of “Russian collusion” and hyping nonstop leaked presidential phone calls and Oval Office discussions.

In other words, all that Trump did became an unspoken veritable gift to Biden, and how Trump spoke and communicated was even a greater present for the mute and invisible Biden.

All knew that the mediocre Biden—a former two-time presidential loser, the butt of ridicule during the Obama administration, at 78 of doubtful cognitive abilities, a proverbial fabulist, habitual plagiarist, and prone to the most nonsensical racial riffs of any major political figure in recent memory—was an unlikely presidential winner and likely would be an inept president.

The Glories of Nihilism

Of all Biden’s diminishing powers, megalomania seems the last to go. So instead of claiming credit for his predecessor’s accomplishments, Biden did the very opposite, with pretensions he would outdo Obamacare, the New Deal, and the Great Society all at once.

In that vein, he has not only misrepresented Trump’s achievements, but in spite and ignorance sought to undo them at the border, on the economy, and in public health.

Biden is back to habitual demonizing the former “chumps” and “dregs” with a new epithet of “Neanderthals.” His short-term memory is stuck on mask obsessions, as if the more the Neanderthals are freed of them by vaccinations and growing herd immunity, the more he should mumble that they need two not just one.

Biden calls any state that reasonably asks for voter IDs racist. He has reverted to a paranoid presidency that is far less transparent than Trump’s, far more isolated, and reliant on a groveling media to disguise what may end up as something similar to the last 14 months of Woodrow Wilson’s presidency, with Jill Biden as the would-be Edith Wilson.

Biden got elected by unleashing others to insist that he was a healer, not a boisterous Trump-style divider, and by enlisting special interests to redefine how we vote.

The odd thing was that the supposedly narcissistic Trump did not emphasize sufficiently his own achievements and real accomplishments as much as he licked his unmerited political wounds, which fed into the Biden construct of a self-obsessed president.

The myth of Biden the healer, and Trump the cruel divider, helped to get Biden elected. But the fantasy that Biden had the answers to problems that Trump created is a far greater—and more dangerous—delusion.